On paper, Pitt football set to improve in 2020 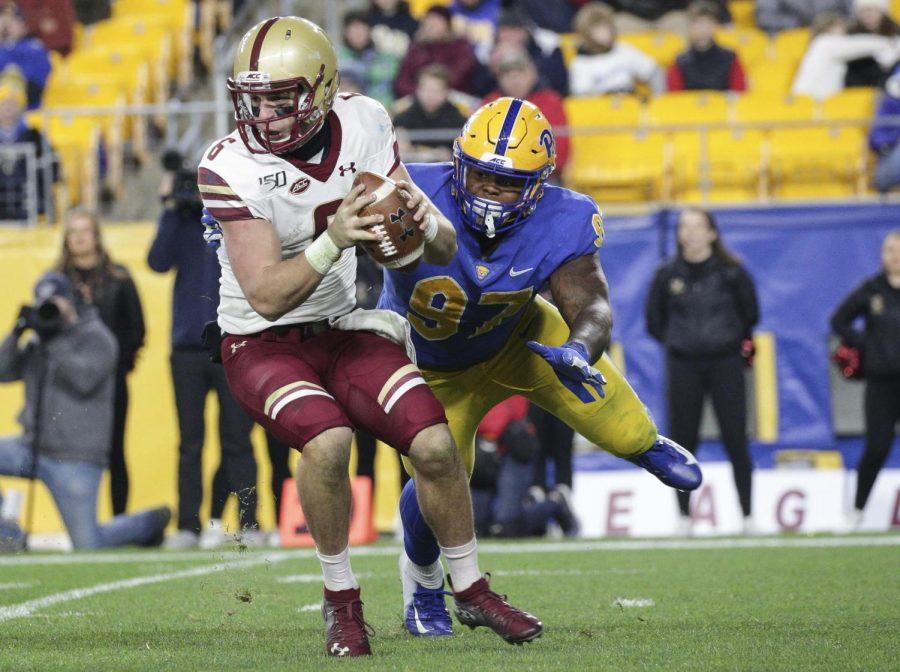 By Henry Jackson, For the Pitt News

The team showed flashes of great potential at times, winning a stunning upset over UCF and a clutch Thursday night overtime victory against UNC.

But at other times, the Panthers failed to perform in important situations. Underwhelming losses against Miami, Virginia Tech and Boston College ultimately prevented Pitt from returning to the ACC Championship.

After an ugly win over Eastern Michigan in the Quick Lane Bowl to close out the year, head coach Pat Narduzzi’s squad is — on paper — set to improve in the 2020 season. Centered on a strong core of returning starters, and with a number of promising signees already committed, Pitt looks to remain solid on defense and improve its offensive productivity.

Pitt’s stellar defense, which finished the season ranked No. 15 nationally in yards per game allowed, should be left largely intact. On the defensive line, redshirt sophomore defensive tackle Jaylen Twyman and junior defensive end Patrick Jones II announced they would skip the NFL Draft to play one more season at Pitt. Both players had breakout seasons in 2019, as Twyman led the team with 10.5 sacks and Jones II led with 18 quarterback hits.

Pitt’s defensive line will only graduate defensive tackle Amir Watts, who recorded seven tackles for loss, setting this unit up to dominate in 2020.

The Panthers’ 2020 defensive backfield is harder to predict. Redshirt sophomore safety Paris Ford — who led the team with 97 tackles and three interceptions — has chosen to play one more season before declaring for the draft. Pitt is also petitioning the NCAA to grant safety Damar Hamlin one more year of eligibility, though his return is unlikely.

Together, Ford and Hamlin were Pitt’s two most productive backs last season. Senior cornerback Dane Jackson will move on to the NFL draft, and he may be replaced by incoming recruit Jahvante Royal, a four-star safety out of Florida’s St. Thomas Aquinas High School.

As a final touch, Pitt signed three-star outside linebacker Bangally Kamara out of East High School in Akron, Ohio, a talented player who could become a multi-year starter for Pitt.

The Panthers need to improve the most on offense. They finished 2019 ranked an embarrassing No. 114 out of 130 FBS teams in scoring offense, averaging just 21.2 points per game. Pitt especially struggled to run the ball, averaging only 3.5 yards per carry and scoring 11 rushing touchdowns.

But with a more experienced offensive line, the Panthers should find more success on the ground next season. After losing four of five starting linemen heading into 2019, last year’s unit was young and inexperienced. With every starter returning in 2020 aside from senior tackle Nolan Ulizio, the line should create more of a push up front and be better equipped to defend the quarterback.

In the offensive backfield, first-year back Vincent Davis showed great promise when healthy and properly utilized. He paced Pitt’s backfield with 5.1 yards per carry and five touchdowns and should be considered the No. 1 back entering 2020. Incoming first-year back Israel Abanikanda, a three-star prospect out of Brooklyn, should also contribute immediately.

Something to watch in 2020 is how offensive coordinator Mark Whipple utilizes sophomore swiss army knife V’Lique Carter, who ran for 243 yards on 65 carries. The 5-foot-9, 185-pound Carter made a splash in 2018 as a speedy scatback in former coordinator Shawn Watson’s offense, often taking jet handoffs around the edge. Whipple, however, chose to use Carter as a traditional tailback — a strategy that did not pay off. Carter could be a crucial X factor next season, but only if Whipple deploys him correctly.

Junior quarterback Kenny Pickett will return for his final season in 2020, eliminating any drama about the position. However, the team recently signed Arizona State first-year quarterback Joey Yellen, who is expected to compete with current backups Davis Beville and Nick Patti for the job in 2021.

Pickett will lose his leading target, senior Maurice Ffrench, to graduation. But the rest of the unit — highlighted by redshirt junior Taysir Mack and sophomore Shocky Jacques-Louis — is set to return and could even improve with help from a couple new signees and transfers. The Panthers signed Jordan Addison, a talented four-star recruit out of Frederick, Maryland. He’ll be joined by Aydin Henningham, a three-star signee.

Both receivers made strong showings in their senior seasons, and Henningham demonstrated his athleticism by averaging 21 yards per punt return last year. Also, tight end Lucas Krull transferred from the University of Florida to play his final season at Pitt. He could potentially play a significant role in a Pitt offense that has struggled to get production from the tight end position.

The Panthers’ non-conference schedule consists of games against Miami (Ohio), Marshall and FCS Richmond, all of which should be fairly winnable. Things get tricky with a matchup against Notre Dame, though it will at least take place at Pitt’s home field.

And as the notoriously turbulent Coastal Division has proven season after season, what happens once conference play begins is anyone’s guess.