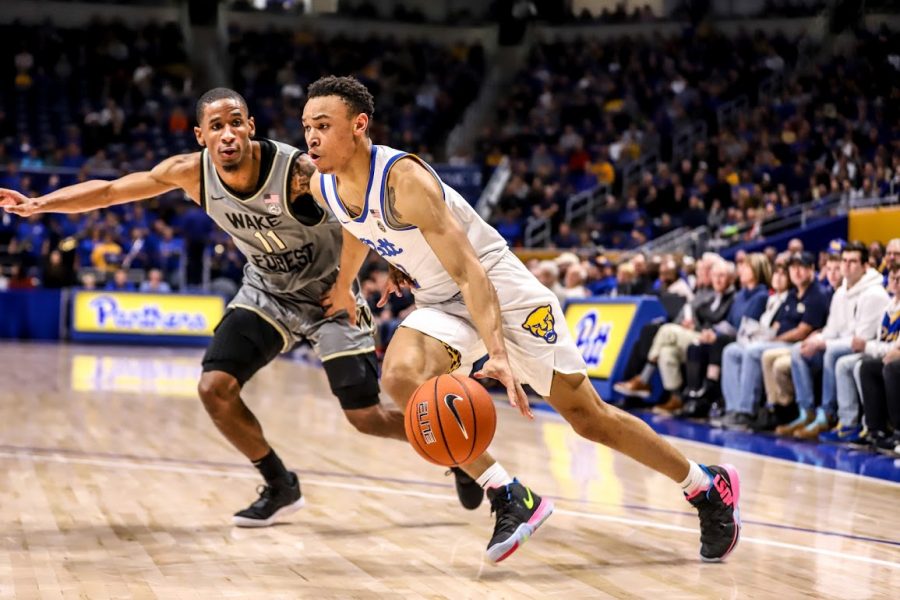 The Panthers are now 6-0 when sophomore guard Trey McGowens scores 20 or more points.

Pitt men’s basketball has had a rollercoaster of a season so far. The Panthers boast wins over ranked Florida State and Rutgers teams and exorcised some long-standing conference demons with a win over UNC Wednesday night. They also suffered losses to middling programs like Wake Forest and Nicholls State while playing too close for comfort with a few more.

One can theorize all day about the state of Pitt basketball, but as the saying goes — men lie, women lie, numbers don’t. This article brings attention to some of the statistics that define the team as it currently stands — and where it may be headed in the future.

It was a well-known fact entering the season that Pitt plays better when sophomore guard Trey McGowens is on top of his game. The Panthers were 4-0 last season when the maddeningly inconsistent McGowens cracked the 20-point barrier, including a pair of 30-point performances against ACC top dogs Florida State and Louisville.

After knocking off an admittedly struggling UNC squad behind a dominant 24-point performance from McGowens, the Panthers are now 6-0 when he scores 20 or more points. He appears to be hitting his stride entering conference play, having scored double digits in seven of Pitt’s last eight games. McGowens leads Pitt with 12.9 points per game and the Panthers are tough for anyone to beat when he’s making aggressive, decisive plays like this:

TREY MCGOWENS SENDING THE TAR HEELS BACK TO HELL pic.twitter.com/LbZuJlPyve

Despite quickly establishing himself as Pitt’s most talented newcomer, first-year forward Justin Champagnie suffered from a miserable shooting stretch to start the season. He made just five of 37, or 13.5%, of his 3-point attempts over the Panthers’ first 12 games.

But Champagnie’s shot always looked smooth and fundamentally sound, making it a question of when and not if he would ever get on track. It turns out that “when” was three games ago, when he went 5-6 from long range in leading the Panthers to victory over Canisius.

Including the Canisius win, Champagnie has shot 10-19, or 52.6%, on 3-pointers over Pitt’s last three games. He was on fire again versus the Tar Heels, shooting 4-7 from beyond the arc to form a lethal shooting tandem with McGowens.

Champagnie obviously won’t make half his threes for the rest of the season, but he was due for some extreme adjustment after starting out so poorly. The recent stretch has brought his season-long 3-point shooting to a still-subpar 26.8%, though that should continue to rise throughout the season. Champagnie has decent height for a wing and shoots cleanly and confidently, making him one of Pitt’s top shooting threats moving forward.

333rd: Pitt’s national rank, out of 353 Division I teams, in defensive rebounding percentage

But man, does Pitt absolutely stink at rebounding.

The Panthers currently have a defensive rebounding percentage of 67.6. Defensive rebounds are typically viewed as an afterthought — the opposing players, being positioned outside the defense, are at a natural disadvantage to grab the ball as it comes off the rim.

But when opposing teams shoot against Pitt, they have a 32.4% chance of getting their own rebound. That’s terrible! To reiterate, any team playing Pitt has a roughly one in three chance of continuing its possession even after a missed shot. Those rebounds often translate into second-chance points scored against the Panthers.

As bleak as Pitt’s rebounding situation is this season, it must be nice for Capel and the Panthers to know that help is on the way.

6-foot-9, 240-pound big man John Hugley has been a human wrecking ball in his senior season at Cleveland’s Brush High School, averaging 23.2 points and 4.1 assists while shooting 44% from distance and leading his team to an 8-2 record so far.

Pitt commit 4⭐️ PF/C John Hugley mid-season mixtape. Hugley is getting more athletic every time there’s film of him, will have a significant impact with Pitt’s low post next year. pic.twitter.com/WTqIhwSLmp

But most importantly, Hugley is hauling in a whopping 15.9 boards per game. The four-star prospect is a walking rebound and will give Pitt something it hasn’t had in a long time — some serious beef in the post. With his big body and high motor, Hugley should contribute instantly next season as the Panthers start to correct their rebounding woes.

The first-year wingman began the season as a starter but moved to the bench after shooting 0-4 from three and scoring two points combined in the Panthers’ first two games. He played sparingly in Pitt’s next two games and failed to make a field goal before suffering an ankle injury that sidelined him for over a month.

Things haven’t been any better for Drumgoole Jr. since returning against Canisius on Dec. 30. He has failed to crack the 10-minute barrier in the three games since and has yet to make a 3-pointer this season, missing all nine of his attempts.

Against UNC Wednesday night, Drumgoole Jr. was a mind-boggling -16 in 10 minutes of an eight-point victory. No other Panther had a +/- lower than -3.

These performances haven’t exactly done wonders for Drumgoole Jr.’s statistical outlook. Out of all Panthers to play at least 60 minutes this season, he’s the only one with a negative PER, an all-in-one basketball rating meant to boil down a player’s contributions into one number.

This isn’t to say all hope is lost for the young Drumgoole Jr. or that these numbers are indicative of his ability. The standout play of Champagnie has made us forget that there’s almost always a significant learning curve for new players, especially in the cutthroat ACC.

The good news for Drumgoole Jr. is that he can’t really play any worse, meaning his career can only go up from here. After showing a strong shooting stroke in high school, he should be a pivotal part of Pitt’s plans eventually — but perhaps not right now.

3.9: turnovers per game by Xavier Johnson

Sophomore guard Xavier Johnson expressed a goal this offseason to cut down on his turnovers. But it hasn’t really happened — he’s still giving the ball away 3.9 times per game compared to 4.0 last season.

For a player who received some NBA Draft hype before the season began, Johnson must cut down on the turnovers if he wishes to take his skills to the next level. He is Pitt’s unquestioned No. 1 ball-handler, leading the team with 5.0 assists per game, and possesses a tantalizing blend of strength and quickness. But his occasional tendency for tunnel vision is a red flag for professional scouts.

If Johnson doesn’t improve his decision-making this season then he’ll likely have no choice but to return to Pitt in 2021 for another year of development.

McGowens excels at drawing fouls. He can do this in the full court, with his nearly patented penchant for slamming the brakes when a defender is on his back. He does this in the half court with his go-to move — a hard jab step one way to get the defender on his side, who he then maintains contact with by extending his off arm.

Naturally, all these drawn fouls result in a lot of free throws. McGowens leads the Panthers with 4.7 free throws attempted per game.

Last year, he knocked down those attempts at a respectable 76.4% clip. That hasn’t been the case so far this season, where McGowens has seen his free-throw shooting dip to a worrisome 68.6%.

It’s tough to pinpoint exactly why McGowens has struggled from the line this season. Free-throw shooting can be a volatile year-to-year aspect for even the greatest basketball players — NBA superstar LeBron James, for example, is shooting 68.8% this season compared to a 73.5% career average.

There are countless aspects in which basketball players should aspire to be like LeBron. Free-throw shooting, long considered a weakness of “The King,” is not one of them. Hopefully for the Panthers, McGowens fixes whatever is plaguing him at the charity stripe — or else those missed free points could haunt the team in close losses.

With 353 basketball teams competing at the Division I level, it’s tough to be a top-25 team in any single statistic. But the Panthers just crack the top-25 in points allowed per game, giving up an average of 60.7. That’s better than any ACC team aside from Virginia.

Every team yearns for an identity. The Jamie Dixon-era Panthers were known for being slow and methodical on offense and playing stifling team defense, often ranking among the nation’s best teams on that side of the ball. Through one-and-a-half seasons of the Jeff Capel era, the jury is still out on Pitt’s offensive identity. Suffocating defense, however, seems to be the Panthers’ calling card once again.