Opinion | 10 Days in the “Heroic Little Nation of Israel” 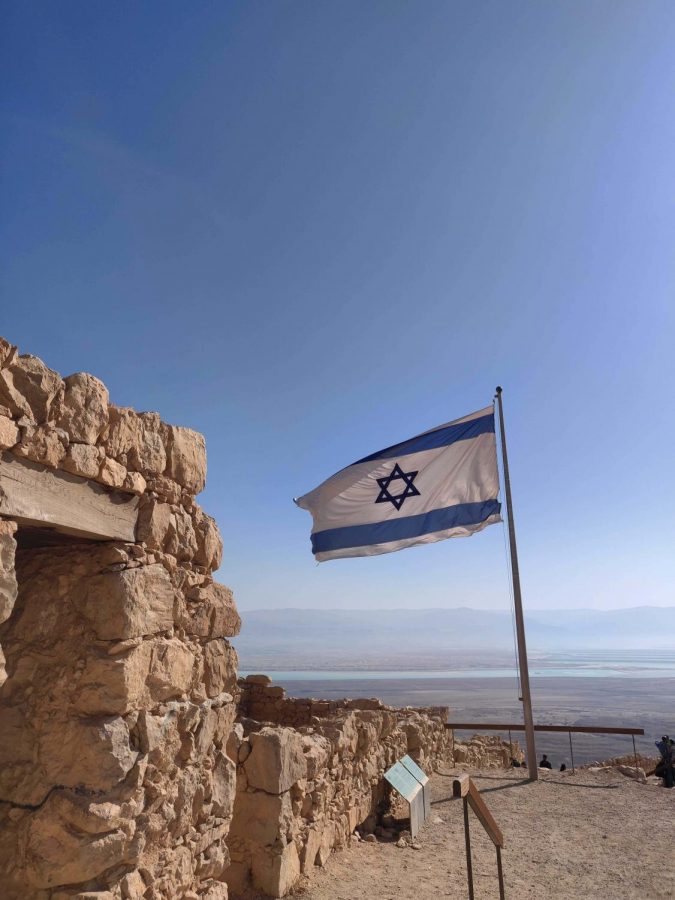 The Israeli flag at the top of Masada.

By Aidan Segal, For The Pitt News

The sun sets on the hills of the Old City of Jerusalem as we are greeted with the singing of “Am Yisrael Chai” and the blowing of the shofar. It is a celebration marking our arrival to the heart and soul of the coveted land our ancestors could only dream of returning to throughout thousands of years of exile — Israel, the lone Jew among the world’s nations.

We are a group of 33 Jewish students over the age of 18 on our winter breaks, primarily from universities in Pittsburgh and Denver, embarking on a rite of passage unlike bris and b’nai mitzvah, which are ancient traditions. This rather new tradition — established only 21 years ago — is a trip through Birthright Israel, an organization which sponsors a free trip to the Holy Land as a way to “strengthen Jewish identity” and secure a “vibrant future of the Jewish people.”

For the majority of us, it is our first time visiting the State of Israel. We first learned of this country in Hebrew school while reading the Torah, in which this land is referred to as God’s “everlasting possession.” The sacred text says it was bestowed upon Abraham and his descendants, the Israelites — a people to be “as numerous as the stars in the sky” through His covenant.

And now we are here, under the flag with the Star of David, which once was a marking sewn onto our clothes for identification and humiliation, but now is a symbol of our resilience. For 10 days we explore the land that gave birth to the most tenacious and brilliant people in history — and every step feels familiar.

The first steps we take are in Ben Gurion Airport in Tel Aviv — named after the country’s first prime minister — where we meet the eight Israeli soldiers accompanying us on the trip. Israeli men and women over the age of 18 are required to serve in the military, and the soldiers on our trip work in anything from the Iron Dome — a missile defense system devised to intercept and destroy enemy rockets — to identifying and demolishing underground tunnels constructed by Hamas, a terrorist organization.

Together we enjoy the holy and mystical city of Tzfat, the ancient fortress of Masada and the simple beauty of communal living on Kibbutz HaOn, located on the shore of the Sea of Galilee. Then there is Tel Aviv, where Jewish life is expressed in high rises, bars and technological innovation, rather than synagogues, kosher restaurants and religious observance.

Jewish identity in that regard is a perplexing phenomenon for me, because many of us, including myself, believe that we are not just members of a religion, but a nation.

Theodor Herzl, along with many of the founders of the State of Israel, like Ben-Gurion and Golda Meir, were entirely secular, and they are no less Jewish than Moses or any other religious figure. For many of us, we are Jewish not just because of our religion and culture, though the two are indivisible, but because we are born of a Jewish ethnicity.

A lot of the participants on our trip are confronted with that realization at the Western Wall in Jerusalem, myself included. It is the sole remnant from the destruction of the Second Temple in 70 CE and the holiest site in the world for Jews. It is customary to place a written note or prayer in a crevice of the wall.

There are bound to be a range of emotions for Jews approaching the wall — the presence of the Divine, a sense of awe for such an ancient structure, an appreciation for their heritage or, just as likely, nothing at all.

For me, it is an awareness of the responsibility I have to every Jew, especially those in my family, who can’t stand before and place their hand on the Jerusalem stone wall that is central and emblematic to the Jewish people.

My Bubbe — Yiddish for “grandmother” — who passed away before I was born, was one of those Jews. Her name was Anne Segal, and she was an ardent defender and champion of the “heroic little nation of Israel,” as she called it in one of many letters to the editor she would write to the Pittsburgh Post-Gazette or Pittsburgh Press. If there is any one thing I feel at the Kotel — as the wall is called in Hebrew — it is the immense and unapologetic pride she instilled in me, being a Jew, despite never meeting her.

But, the world is still at odds with the existence of Jews. Anti-Semtism remains an incurable disease in Europe, as is seen with the many Jews, especially French, fleeing to Israel. The United States, despite historically being a safe haven for Jews, is not immune to the ancient hatred either. There were 1,879 anti-Semitic incidents alone in 2018, including the Tree of Life massacre, according to the Anti-Defamation League.

Yad Vashem, the architecturally breathtaking memorial and museum of the 6 million Jews murdered in the Holocaust, is a reminder of that undying dilemna. Sitting on Mt. Herzl, the building “penetrates the mountain from one side to the other, with both ends dramatically cantilevering into the open air,” as described on the museum’s website.

After a museum tour chronicling the vicious and systematic slaughter of European Jewry, my trip participants are lead to a lookout into the open air presenting the landscape of the country of the brave diasporic people who would rise from the rubble of genocide and create new generations. Jews who will never have to know what it is like to be without a home for past generations know the cost of not having one.

We are told by our tour guide, Noam, that he hopes this trip leaves us with more questions than answers. With another wave of anti-Semitism penetrating the United States and Europe, you can’t help but question your place in the world as a Jew — where do we belong?

In Judaism, there are always more questions than answers, and if there is any one thing I cherish about being Jewish, it is that skepticism and questioning are encouraged.

“As long as in the heart within,” the Israeli national anthem goes, “the Jewish soul yearns” for the beautiful and inspiring Land of Israel that we can call home, where we can live free, where every step feels familiar because it is the very earth our ancestors wandered.

A land where we sing, “Am Yisrael Chai” — the Jewish Nation Lives.

Aidan is a junior majoring in English Writing with a certificate in Jewish Studies. He primarily writes about film and Judaism. Write to Aidan at [email protected]