Stitches for a cause: making knit work with the Fiber Arts Crew 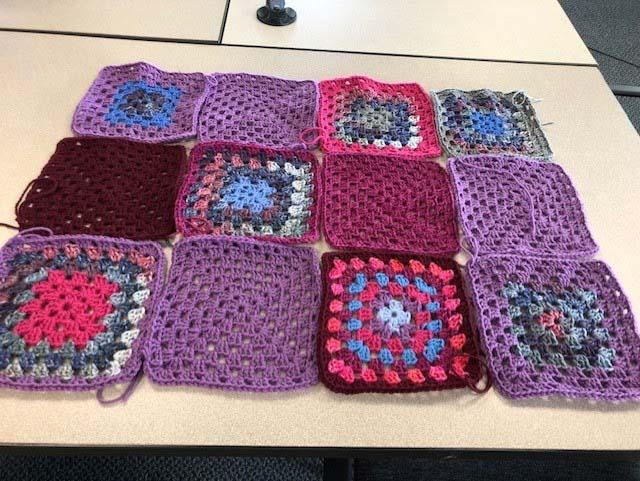 The Fiber Arts Crew is a tight-knit group of knitters and crocheters across Pitt’s regional campuses working to make 100 blankets for each of the anticipated attendees at The Older Youth Retreat in 2020, an event for foster youth from across Pennsylvania.

While the Fiber Arts Crew at Pitt is not particularly tight-knit, a mission of giving back to children in need through art stitches them together.

What started as one group of people in one small town eight miles outside of Harrisburg, the Fiber Arts Crew is now spread out across the University’s regional campuses. The collective of more than 40 knitters and crocheters are working together to make 100 blankets for foster children.

Kathleen Swain, assistant director of the Child Resource Center for Pitt’s School of Social Work, stationed in Mechanicsburg, started this group at work in 2019. Swain, who knows how to knit and crochet, taught her skills to some interested coworkers a couple years ago.

In 2019, the group decided to use its skills to give back to its community by crafting and donating a blanket made of simple patterns of blue, gray, white, brown and purple yarn scraps to be raffled off to a foster child at the Older Youth Retreat, an event held annually by the School of Social Work’s PA Child Welfare Resource Center.

Since last year, the group has grown to more than 40 members, and now aims to make at least 100 blankets for the 2020 Older Youth Retreat, which helps prepare current or former substitute care youth for adulthood. They’ve completed 20 blankets so far in shades of pink, blue, purple and white, and don’t plan on slowing down. Swain said their goal is to help teens in foster care feel loved and supported.

“Our mission is to wrap the youth in warmth. We want to wrap them in support, and the blanket is to wrap around them,” Swain said. “We want them to have physical evidence of the support we have for them to take as they transition from foster care to adult life.”

After receiving a grant from Pitt’s Year of Creativity project, the group is able to send supplies and tools to those helping with the blankets. Still, making enough 8-by-8-inch squares for blankets before the retreat this summer is a tough task, and as of December, the Crew was looking for more members.

“We’re always looking for more people. Depending on where people are located, we would be able to teach people how to knit or crochet, if they’re interested in that, as well as give them supplies to make the squares,” Swain said. “We also want people to know that any kind of fiber arts work, whether it’s knitting, crocheting or anything else is also a very productive yet relaxing activity.”

Marlo Perry, an assistant research professor with the Child Welfare Education Research program in the School of Social Work, said she joined the project because she wanted to contribute to a cause that did not have an enormous time commitment.

As a knitter in her spare time, she leads the branch of the Fiber Arts Crew at Pitt’s Oakland campus. Though Perry is mainly in contact with her members through email, between now and August, when the next retreat is hosted, there will be a few get-togethers for members to knit, crochet and assemble blankets.

Because children placed in the foster system do not have many personal items, Perry said she hopes the handmade blankets will be significant to them.

“I think it’s meaningful for anyone to have something handmade with care and I think the youth don’t always feel a lot of care,” Perry said. “Having a blanket that they can take with them, I hope, will be meaningful.”

Swain said the yarn they’re asking contributors to use must be washable, and that they want to avoid wool so the blanket doesn’t shrink. They’re also open to accepting quilts, so quilters are more than welcome to join.

According to Perry, anyone who already knows how to knit or crochet can manage to make an 8-by-8-inch square in their spare time. The squares can be as intricate or as simple as the members want them to be, though the time investment depends on the weight of the yarn and the intricacy of the square.

“My skills are pretty rudimentary, so my squares are all basic knit stitches, and I tend to prefer bulkier yarn, so squares knit up pretty quickly,” she said.

Perry’s team in Oakland includes both basic knitters to accomplished fiber artists. She said a single person doesn’t have to produce an entire blanket themselves — however, some fiber artists may opt to create entire blankets on their own.

“I think the other nice thing about this is you can just make one square or you could make five dozen,” she said. “It just depends on your availability and willingness.”

Dana Farrel, of the Clinical Translational Sciences Institute, is a champion for the group here in Pittsburgh. She received an email when the Crew started looking for members and decided she wanted to join. Now, she’s teaching others to crochet.

“I said I was going to do this at work,” she said, “Now I have five coworkers that are also going to contribute squares, 8-by-8 squares, for the project.”

With a blanket in tow, Farrell hopes the teens will remember that people want them to succeed as they enter adulthood and that there are people out there that care and wish nothing but the best for them.

“I’m hoping that when they receive these blankets that they know that there are people out there that care about them,” Farrel said. “That people are thinking about them and wishing them well.”