What to watch for in Pitt sports this week 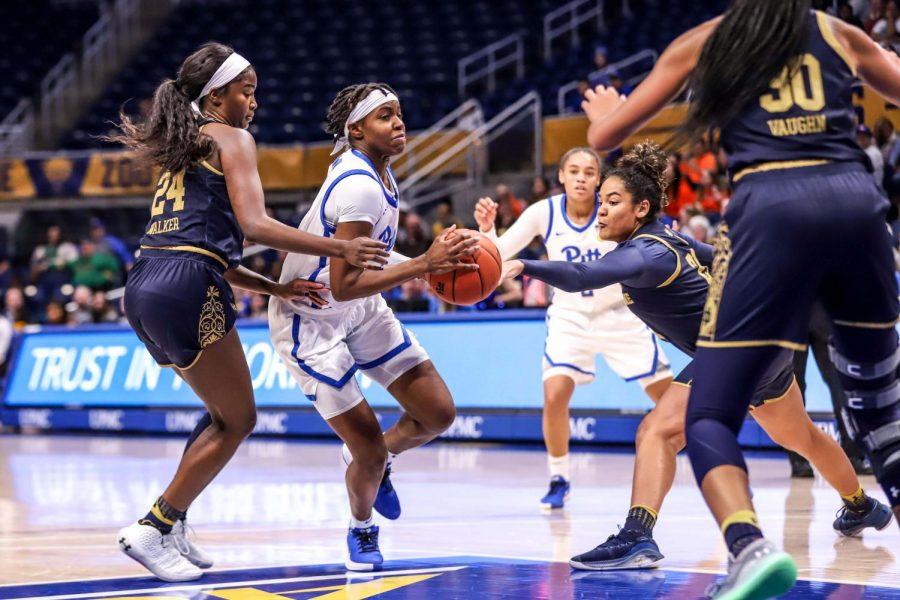 The upcoming week in Pitt sports boasts a packed slate, including two men’s basketball games, a top-10 battle involving the red-hot wrestling team and a chance for women’s basketball to steal a long-awaited road win. Panther fans, get your popcorn ready.

The Panthers’ up-and-down season continued Sunday. Fresh off an impressive win at UNC the previous Wednesday — which might not be so impressive after all, considering the Tar Heels have now fallen to Clemson and Georgia Tech — Pitt (11-5 overall, 2-3 ACC) fell back to earth at Miami, shooting 35.9% from the field while allowing the Hurricanes to shoot 52.9% in a 66-58 loss.

Few Panthers were spared from the shooting troubles. First-year forward Justin Champagnie entered the game on a hot streak but shot an abysmal 3-16 from the field. Junior guard Ryan Murphy went 1-5 on 3-pointers and 4-12 overall.

Perhaps most worrisome of all was that sophomore guard Xavier Johnson, Pitt’s lead playmaker, performed so poorly that head coach Jeff Capel seemed to lose trust in him. Johnson had as many turnovers (4) as points and was relegated to the bench for much of the contest, tying his season low with 24 minutes.

The good news is that another trio of Panthers — sophomores Trey McGowens and Au’Diese Toney and junior center Terrell Brown — played admirably. McGowens led Pitt with 18 points and seven assists, Brown made a season-high five of six field goals and Toney contributed across the board in his first game back from injury.

The bad news is that things don’t get any easier for the Panthers in their next game. They received just one full day of rest before hosting No. 11 Louisville Tuesday night at 7 p.m.

The Cardinals may not be as daunting as when they hosted Pitt as the nation’s No. 1 seed in the teams’ first meeting on Dec. 6. The Panthers hung around in that game, even drawing within five points in the second half, before losing momentum down the stretch and falling 64-46.

But while Louisville’s ranking may be different, its core lineup hasn’t changed. And as long as superstar junior forward Jordan Nwora — the ACC’s leading scorer with 20.8 points per game — is on the court, the Cardinals remain a nightmare for opponents.

For Pitt to have a chance, it would take a resurgent effort from the struggling Johnson, coupled with a similarly strong performance from his backcourt mate McGowens. On the interior, the undersized Panther frontcourt of Brown, Toney and graduate center Eric Hamilton must put on its big-boy pants against Nwora to prevent him from single-handedly taking over the game.

If the Panthers do falter and lose a second straight to Louisville, Pitt fans need not worry — Capel’s crew will have a golden opportunity to get back on track with another home matchup against the woeful Tar Heels Saturday at noon.

The Pitt women’s team can’t seem to catch a break.

After beating Ole Miss on Nov. 30, the Panthers have now dropped eight straight games, including four in the ACC.

To its credit, Pitt (3-12 overall, 0-4 ACC) hasn’t been an easy out, losing by single digits in six of those eight games. But with such an inexperienced roster — aside from fifth-year guard Aysia Bugg and junior center Cara Judkins, the Panthers typically start three first-year players — the Panthers simply haven’t yet figured out how to win close games.

There is, perhaps, some room for optimism. Rookie guard Amber Brown has shown the potential to be a bona fide star down the line, carving out a role as the Robin to Bugg’s Batman by averaging 11.1 points and a team-leading 8.4 rebounds per game.

Pitt’s next game could finally see the Panthers snap their streak against a beatable Clemson opponent. The Tigers (5-11, 1-4 ACC) aren’t exactly world-beaters, though they handily beat a Notre Dame team that Pitt lost against.

The Panthers will travel to Clemson this Thursday for a 7 p.m. tip-off that should serve as a litmus test for head coach Lance White’s squad. If Pitt can’t steal a win from the Tigers, its losing streak could continue for the foreseeable future, considering the two are bunk buddies at the bottom of the ACC standings.

Pitt’s pool-dwellers will take on Denison University at Trees Pool Friday at 4 p.m. The meet will showcase two Panthers who have dominated all season long — junior Blaise Vera of the men’s team and senior Valerie Daigneault of the women’s team.

Vera earned ACC Swimmer of the Week honors for the third time this season on Jan. 7 after taking gold in the 50- and 100-yard freestyle against West Virginia. He also made national headlines in November by winning the Purdue Invitational’s 50-yard freestyle in 19.10 seconds — at the time the best mark of any swimmer this season.

Daigneault earned Pitt’s Student-Athlete of the Week honor on the same day she led Pitt’s women to victory over the Mountaineers by winning both the 100- and 200-yard backstroke events. She holds the Pitt all-time record in both events, as well as the 100-yard freestyle.

Don’t look now, but Pitt is … a wrestling school?

Volleyball was the University’s top team until the Panthers met an unfortunate end in the NCAA Tournament second round. Now Pitt wrestling has taken the mantle, currently sitting at No. 10 in the country according to the National Collegiate Wrestling Association Coaches Poll.

Pitt’s only loss came earlier this season to powerhouse program Ohio State, currently ranked No. 5. The Panthers currently stand at 5-1, including a win over No. 14 Lehigh.

Head coach Keith Gavin’s gang will again put its skills to the test this Saturday at 8 p.m., when the Panthers travel to Stillwater, Oklahoma, to take on the team sitting just above them in the ranking — No. 9 Oklahoma State.

The Cowboys embarrassed Pitt in last season’s match at the Fitzgerald Field House, 36-9. The Panthers will be hungry for revenge this time around, and are equipped with the talent to snag a crucial team win.

The team’s success starts with redshirt sophomore Micky Phillippi, who has cemented himself as one of the nation’s top wrestlers in the 133-pound class. He leads Pitt with a 15-1 record and is No. 6 nationally in his weight division.