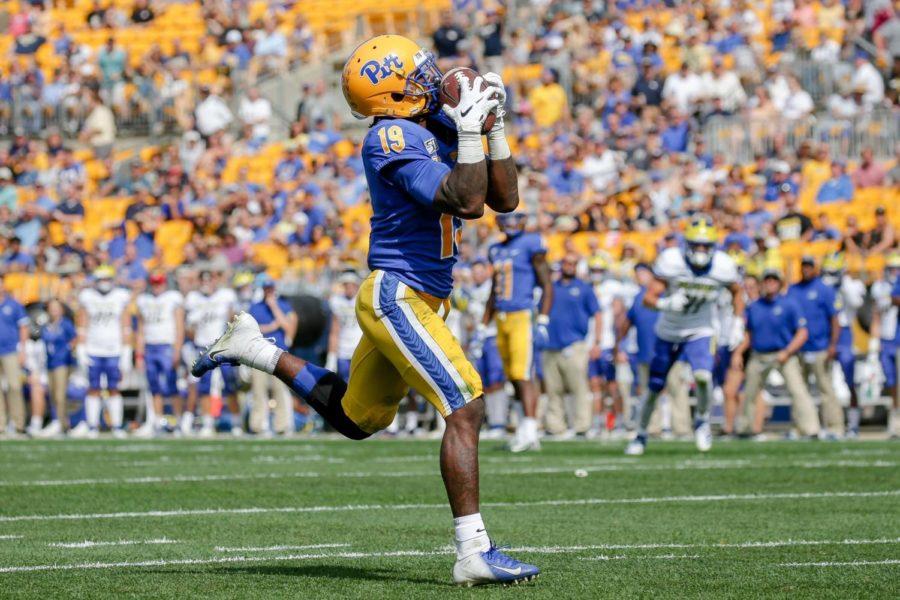 Sophomore wide receiver V'lique Carter (19) pulls in his first receiving touchdown catch out of a streak from the backfield during Pitt's 17-14 win over Delaware.

V’Lique Carter, who recently finished up his sophomore season for Pitt football, will enter the NCAA transfer portal, according to a Tuesday report from the Pittsburgh Post-Gazette.

Carter joined the Panthers as a three-star safety prospect from West Palm Beach, Florida, in the 2018 class. But his role changed once head coach Pat Narduzzi realized the young playmaker’s speed could be utilized on the other side of the ball.

After impressing as an offensive scout team player, Carter burst onto the scene midway through his first season with 137 rushing yards and two touchdowns on just seven carries in a 54-45 win over Duke. He finished the season with 25 carries for 209 yards — an impressive 8.1 yards per carry.

Carter entered 2019 listed as a running back/wide receiver but was never truly utilized as an offensive Swiss army knife. The change in offensive coordinators from run-dominant Shawn Watson to pass-happy Mark Whipple was not kind to Carter. Rather than take advantage of his explosiveness on the edges, Whipple elected to use the 5-foot-9, 185-pound speedster as a traditional back, giving him a steady diet of carries between the tackles.

The results were mixed at best — as part of a backfield committee that included junior A.J. Davis, first-year Vincent Davis and redshirt sophomore Todd Sibley Jr., Carter finished third on the team with 65 carries. He averaged only 3.7 yards per carry and didn’t score any rushing touchdowns. Carter did tack on 17 receptions for 183 yards and two touchdowns, including one game-winner against Duke in Week 6.

With all of Pitt’s backfield production returning — and with talented three-star prospect Israel Abanikanda being added to the crowd in 2020 — Carter felt it was in his best interest to take his talents elsewhere. He’ll sit out next season in accordance with NCAA transfer rules.