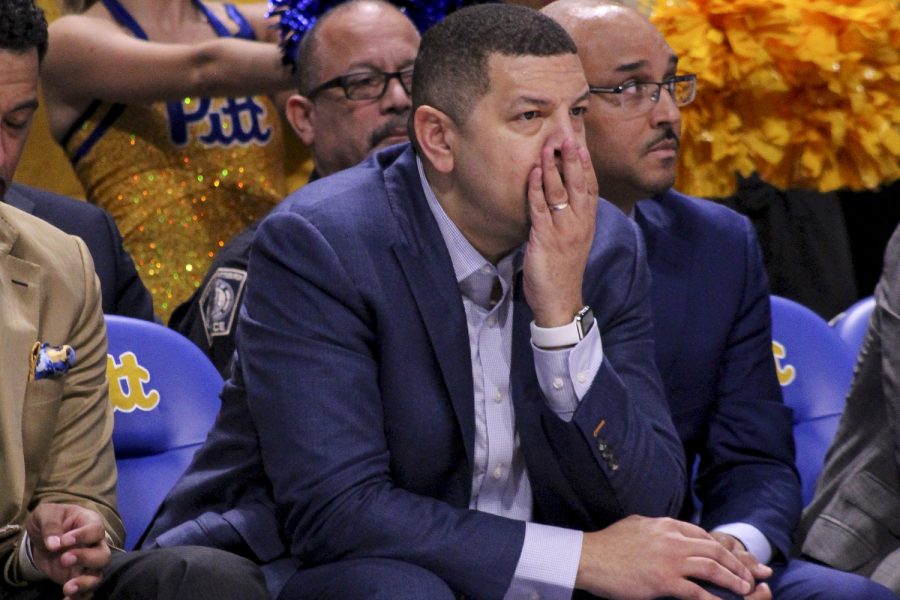 Coach Capel watches from the bench as penalty call dashes the Panthers’ hopes to upset No. 11 Louisville during the end overtime at Pitt’s 73-68 loss to the Cardinals on Tuesday.

With 21 seconds remaining in overtime and Pitt trailing by two, sophomore guard Trey McGowens missed a running layup. The ball bounced off of the rim and fell toward the middle of the paint. Louisville junior guard Malik Williams settled underneath the ball and as he went up, so did Pitt junior forward Terrell Brown.

This was a foul on #Pittsburgh where on what would’ve been a game-tying bucket for Terrell Brown? Terrible. pic.twitter.com/iMQXsracTx

Replays showed Brown made minimal contact with Williams, but a foul was called nonetheless. Williams made both free throws. Then, trailing by four, McGowens missed a 3-pointer. The Cardinals secured the rebound and their fifth conference victory.

A home crowd that was already displeased with the first 44 minutes of officiating continued to rain down boos as the final buzzer sounded.

When asked about the foul on Brown, McGowens provided few words.

But for all that was made of that one play, several others set up Tuesday’s frustrating and confusing ending.

Pitt led for 33:20 of game time, dwarfing Louisville’s 8:49 in front. The Panthers shot 48% from the field — including a blistering 50% from 3-point range in the first half. They assisted on seven of 12 made field goals and if not for an 8-0 closing run by the Cardinals, would have entered halftime with a double-digit lead.

The Cardinals took a brief two-point lead with 1:46 left in the half, but Pitt closed the half with confidence and poise uncommon in this year’s squad. Sophomore guard Xavier Johnson nailed a 3-pointer on the ensuing possession to reclaim the lead and graduate forward Eric Hamilton made a layup as the shot clock expired to give Pitt a three-point advantage entering halftime.

Sophomore guard Au’Diese Toney was stalwart in defending ACC Preseason Player of the Year junior forward Jordan Nwora. Nwora tallied only four points on 2-6 shooting in the opening period, as Toney’s play baffled even his own head coach.

“I don’t know,” Capel said. “I just think he does a good job … I think every time we’ve played [Nwora] … he just does a really good job guarding. I think Au’Diese is a heck of a defender.”

Toney’s defense was still strong in the second half, but after picking up his fourth foul with 12:11 remaining in the regulation, Nwora began to more closely resemble his true self. He only recorded eight points, but was 2-4 on 3-pointers despite being blanketed by Pitt’s best defenders.

But as the game progressed, Nwora’s eight points proved all the more valuable. The slow pace of the second half picked up after a McGowens 3-pointer put Pitt up seven with little more than three minutes remaining.

Led by Williams, Louisville proceeded to score seven straight points and tied the game at 61 with 48 seconds remaining. Another McGowens 3-pointer went wide at the horn and Pitt braced for overtime.

The Cardinals did not miss a beat in the final five minutes. The two teams kept pace through the first 2:30 of overtime, but in the end it was Louisville’s experienced roster that buckled down when the game was on the line. Cardinals head coach Chris Mack spoke highly of his team’s ability to close out games.

“I don’t think last year’s team could have pulled it out,” Mack said. “I think we throw around the word ‘toughness’ a lot and people always equate that to physicality … but it’s the mental toughness too. Being able to come back after three or four possessions in a row where you can’t get the ball to go in the basket and still have the wherewithal to defend how you should … block out and give yourself a chance … It’s not easy.”

Both teams proved who they were in the final minutes. Louisville, a team laden with graduate transfers, seniors and juniors, showed a much leveler head when executing down the stretch than Pitt, a team still growing into its own talent.

The Panthers made three of four from the charity stripe to enter the final half-minute down only two, but their inability to convert field goals in crunch time proved fatal. They missed their final four shots and Brown’s foul was the final blow.

Toney played a well-rounded game despite the loss. In addition to stout defense on Nwora, he scored seven points and collected six rebounds. McGowens led all scorers with 24 and first-year forward Justin Champagnie recorded an 11-point, 11-rebound double-double.

After playing two games in 72 hours, Pitt gets three days’ rest before welcoming UNC for a noon tipoff from the Petersen Events Center on Saturday.