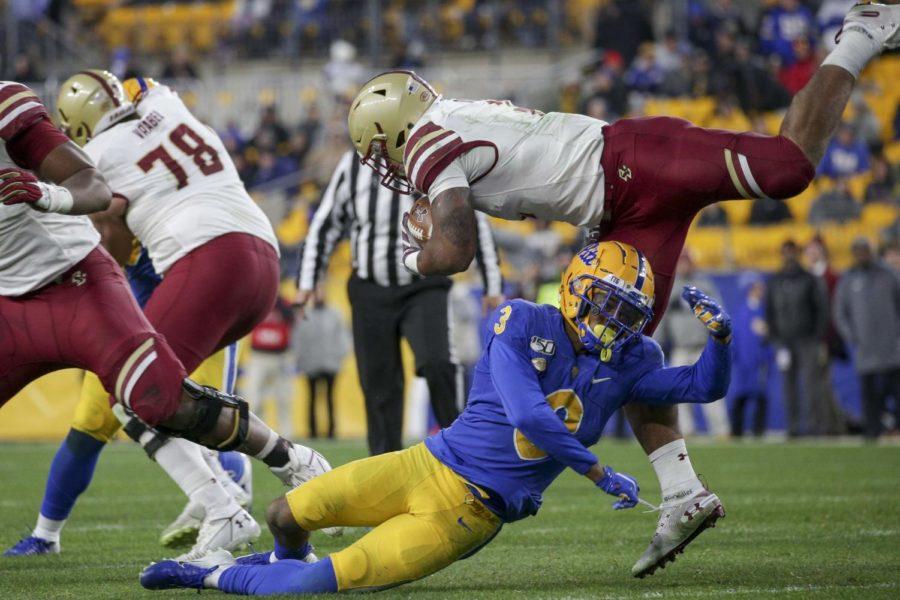 Senior safety Damar Hamlin (3) takes the Boston College halfback off his feet during Pitt’s 26-19 loss to the Eagles.

Most assumed Pitt senior safety Damar Hamlin had played his final down as a Panther when he walked off Ford Field after the Quick Lane Bowl. But head coach Pat Narduzzi revealed afterward that the team would attempt to gain a fifth year of eligibility for Hamlin, considering he only played three games in his first-year season due to injury.

Hamlin’s waiver request was granted by the NCAA Wednesday afternoon, meaning the star safety will return for Pitt’s 2020 season.

“We weren’t certain after our bowl game what the future would hold,” Narduzzi said in a statement. “We really appreciate the efforts of our compliance staff as Damar went through this process. I know Damar is ready to take full advantage — academically, athletically and personally — of his final year at the University of Pittsburgh.”

There was initially skepticism that Hamlin would be granted another year of eligibility. The uncertainty surrounding the situation stemmed from the fact that, for years, a player could not redshirt once he had seen any game action. Hamlin played three games in his first year and then became a regular starter for the next three years, ending any redshirt opportunity.

But the rules changed in 2018, allowing players of any year to play in up to four games and still qualify for a redshirt season. Knowing that Hamlin only played three games in 2016 before the rule was implemented, Narduzzi realized there could be some wiggle room to earn a retroactive redshirt.

Yet there was still a reasonable doubt that Hamlin would really return. For reasons that can’t be fully explained, the NCAA is very unpredictable when it comes to granting waivers. It has allowed players to play for questionable reasons while inexplicably barring others. Whether or not a player’s waiver will be granted is essentially one big, mysterious coin flip.

In this case, the coin fell in favor of the Panthers.

Hamlin, a Pittsburgh Central Catholic alum, led Pitt with 90 tackles and two interceptions in 2018. He formed a fearsome duo with Ford in the 2019 defensive backfield, coming in second behind the standout sophomore with 84 tackles while adding 10 pass breakups. He finished the season on a high note in Pitt’s bowl victory over Eastern Michigan, recording a season-high 13 tackles and an interception.

As the Panthers’ active leader in career tackles with 223, Hamlin will help lead a Pitt defense that should be among the best in the ACC — and the country — in 2020.