Satire | How to escape a conversation with a “Film Bro” 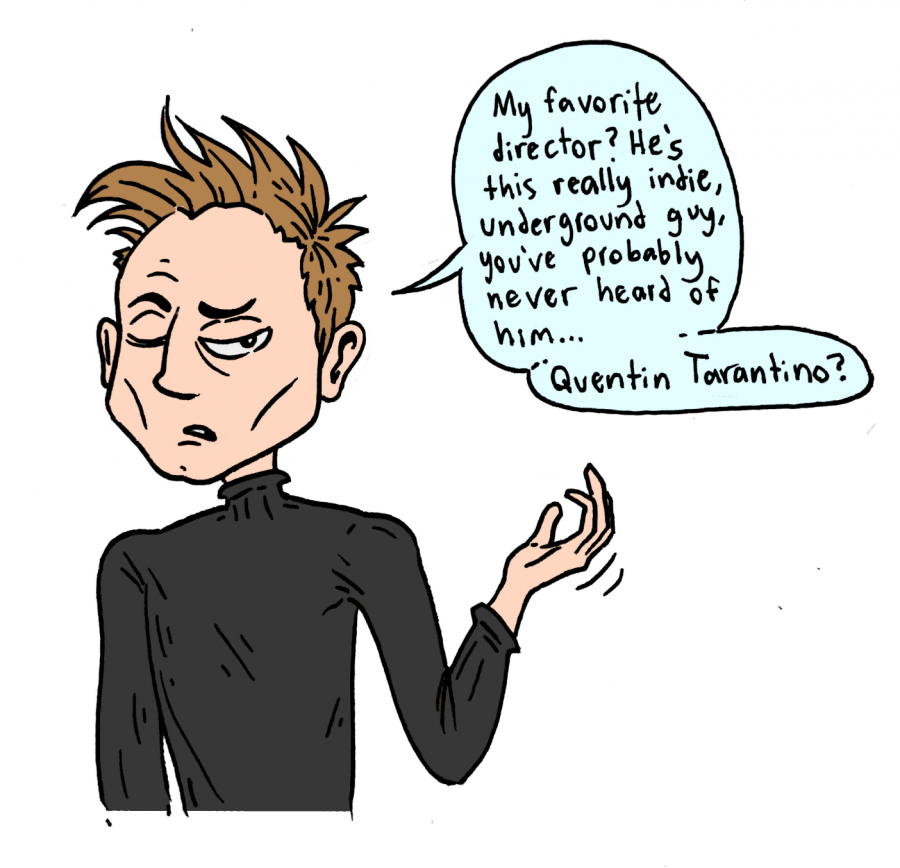 His wardrobe consists entirely of a rotating selection of flannels, nondescript hoodies and “clever” T-shirts referencing something he would just love to explain to you if you wanna grab a coffee sometime. “Ahem, ‘Han Shot First’ refers to a terrible directorial decision Lucas made in ‘Episode Four,’ wait — are you familiar with ‘Star Wars’?” He speaks in movie quotes and one-liners, exiting every room with a loaded pause and an “I’ll be back,” waiting for some schmuck to snort, “Ha ha, Terminator.” He has no problem at all with Roman Polanski — in fact, he thinks he’s a genius, and he’ll have you know the art and the artist are separate, good Lord. If you don’t instantly nod at whatever movie name he’s dropping, this guy will lean back in his chair, throw his arms in the air and say for everyone to hear, “How on Earth have you not seen ‘Spaceballs’?”

Basically, he knows everything about film — except for the name of a single female director aside from Sofia Coppola — and loves to tell you this. You poor uneducated girl sitting next to him in Film and Politics. Or maybe you’ve had the misfortune of running into him at a party and there you are, cornered lest for a can of White Claw you protect against your chest. You’ll find Film Bros everywhere, or a type like them in every major — you can’t escape.

Leaving a conversation with a Bro like this is near impossible. You could point somewhere far off, say “Oh wow, no way! That looks like it could be Scarlett Johansson!” But as much as he loves Scar Jo, she can wait — you simply must hear about the Will Smith movie he saw over the weekend. He will follow you down the hallway, interrupt conversations with your friends, hold you up after class because he really needs to explain to you how “Lost in Translation” isn’t racist, just a tad misguided. To officially end the one-sided “conversation” for good, you have multiple options.

You could argue with all of his points, prove him wrong with evidence and theory, but this takes too much time and rarely works. The scariest thing about a Film Bro is that he doesn’t think he’s a Film Bro. You have things to do — explaining basic social politics in the realm of film isn’t your job. Your dad says your job right now is school, and that’s going to school, not doing the schooling.
Redirect him to one of those online messaging robots that they’ve been working on in the AI community.
Tie Film Bro to a chair, pull his eye open “Clockwork Orange”-style and have him watch Julie Dash’s entire filmography. Her monumental tales about the intersectionality of gender and racial struggles will likely come off obscure to him, especially when paired with Dash’s feminine, commonly non-linear directorial style. For dessert, he can watch all those “chick flicks” he so hates. If he really wants to know Everything about film, he’ll have to see “Legally Blonde” and “Clueless,” films oh so absent of any merit whatsoever to him. Only when he says, “Oh my God, I am totally buggin’,” can you let him scurry back into the wild.
Take the crown off his head and burn it.
Run. Statistics show that Film Bros run an average 10-minute mile, slower if they’re hungover from a night of binge-watching Tarantino. Ask him a question to throw him off, like, “did Kathryn Bigelow sell out for directing ‘Zero Dark Thirty’?” and then sprint away. It’ll take him a while to answer this question — assuming he knows who Kathryn Bigelow is — so you have at least four minutes of a head start.
Throw a Blu-ray copy of “The Dark Knight” at his face. Everyone loves this movie. I guarantee he’d rather watch it than continue to lecture you on the modern merit of Westerns. Maybe you can watch it together. Duct-tape his mouth first so he doesn’t provide commentary the entire time.
Walk away. When Film Bro invariably follows you, side-stepping passersby in a weird half-jog while yelling about Wes Anderson, stick your arm out and clothesline him. Continue walking.
Find the nearest male-identifying human. Bribe him to become your Human Shield, standing in front of you and mouthing the words you say — albeit with a slight delay — in every conversation. If Film Bro sees another dude in front of him and not boobs and legs, maybe he will stop trying to educate you. Sometimes this won’t work — some Film Bros are even more insufferable than regular ones. In that case, create a magic circle and summon a demon of your choosing. A Demon Shield should scare anyone off.
Dare him to find out how many hotdogs he can fit in his mouth at once. This will become a matter of pride to him.
Call upon God.

Dear Big Guy, I know we’ve been having a rough patch and half the time I don’t even believe you exist. It’s hard to put faith in a higher power when I can’t ascertain why said higher power would let all this happen down on Earth, the war and poverty and Kardashians and Film Bros — but could you extend your girl one measly little lightning bolt, placed to the left of me? I promise I’ll stop using your name in vain whenever I have a hookup over. If you want, I’ll stop saying “oh God” in general. I bet it’s kind of annoying to be summoned whenever I drop a bowl of Fruity Pebbles or whenever yet another guy in my film classes tries to explain something elementary to me as if I have no clue what I’m doing. It’s humiliating. It hurts. They don’t listen when I try to tell them I’m just like them, I’m not a doll learning about Soviet propaganda film for kicks and giggles. So, please. Little lightning bolt. Right over there, farther left, right over —