Sorority recruitment comes to an end with chants and special outfits 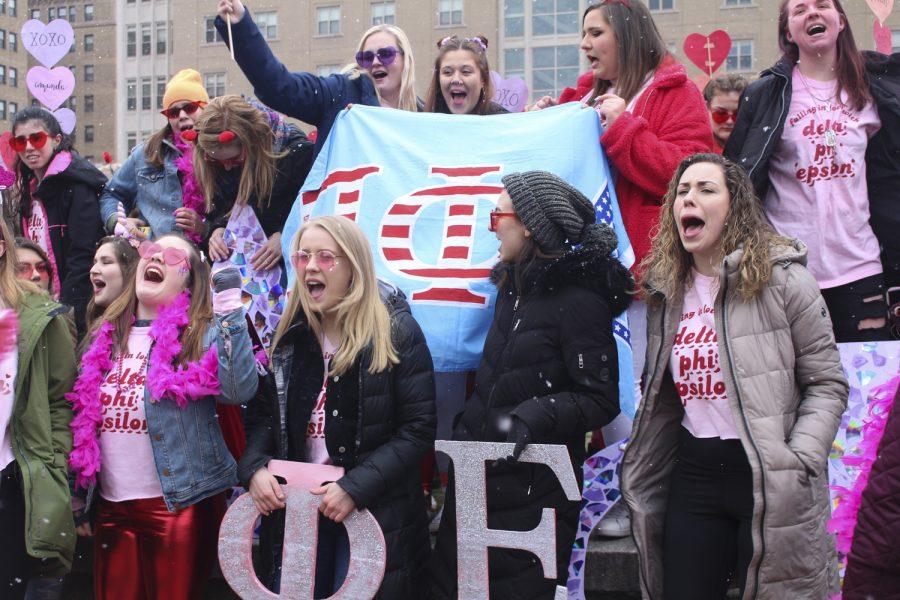 Outside of Soldiers and Sailors Memorial Hall on Sunday, amid booming chants and bright costumes, female students anxiously awaited an invitation to a sorority of their choosing as part of the annual Bid Day, marking the end of formal sorority recruitment.

Eva Gilbert, a first-year history and political science major and new member of Alpha Epsilon Phi, said she knew almost instantly that Alpha Epsilon Phi was the right sorority for her, even before she knew she made the cut. She was so confident in her decision that she decided to rush the sorority through the process known as intentional single preference, meaning that instead of picking two sorority preferences and being guaranteed a bid, she chose only one.

“I ended up knowing I didn’t want to be anywhere else, so I preffed one only, so if I didn’t get this one I wouldn’t have gotten a bid,” Gilbert said. “From the first conversation I had, it was so comfortable and so easy. It felt like my camp friends, and it’s just a great community of girls who welcomed us in so easily.”

Spring sorority recruitment is a two-weekend process that ran from Jan. 10-12 and Jan. 16-18 this year, ending with Bid Day on Sunday at Soldiers and Sailors Memorial Hall.

The rush process is conducted in “rounds.” On the first two days, rushees meet with each of the 10 Collegiate Panhellenic Association sororities. After these initial rounds, the rushees rated the sororities and the sororities decided which girls they wanted to invite back. On Sunday of the first weekend, rushees visited a maximum of seven sororities again, depending on who invited them back. On the second weekend, they revisited a maximum of five for rounds focused on explaining each sorority’s philanthropy and sisterhood involvement. Finally, the rush process ended with “preference,” where the women had to pick between their two top options. On Bid Day, rushees learned which sorority had chosen them.

Fraternity recruitment, which starts Tuesday, is a much more informal process that involves attending Meet the IFC Fraternities today at 8 p.m. in the William Pitt Union Ballroom, where potential new members meet five current members of each of the 19 Interfraternity Council fraternities. Then, rushees go to events specifically for the fraternities they are considering joining up until Jan. 29. Bid Day for fraternities is Jan. 31.

Many first-year students find the adjustment to college difficult. Gilbert was no different, but she said she decided to rush a sorority to help find a larger group of friends on campus.

“I’m trying to do it to find more of a community at Pitt. Adjustment was hard for me, so I’m just trying to find my place here and have a bigger support system,” Gilbert said. “I think I had a pretty small friend group from the start of my freshman year, so just to branch out and meet people who I am similar to.”

Sofia Sonnet, a first-year chemical engineering major, said even though the sorority process was tiring, she liked how it was designed and how inviting sorority members were.

“It was an easy process for me, because I feel like everyone in each sorority was so genuine and nice. The best part is meeting all the girls and getting the sense that you’re going to be part of something bigger and contribute more at your school which is cool,” Sonnet said. “The most stressful part is staying out of your head, because it’s really easy to be like ‘oh they didn’t like me I’m bad,’ but that’s not the case, it’s just not a good fit.”

Gilbert also said she recommended that following the slogan created by fans of the Philadelphia 76ers basketball team — “trust the process” — is perfect for sorority recruitment.

“This is so cliche, but trust the process,” Gilbert said. “I hated when people said that to me, but some of the sororities I liked on the first day dropped me on the second day. I just had to go with it and see who I clicked with.”

“Our process is a lot more laid back. That kind of fits our council better, because with 19 fraternities it would be hard to do formal recruitment,” Kornbau said. “We do have specific requirements for recruitment, though. They can’t occur between certain hours like midnight and 8 a.m., they can’t interfere with classes and they have to be at a third-party registered place or chapter house.”

Kornbau estimated that approximately 400 to 600 people will show up to Meet the IFC Fraternities, and while he can’t predict exactly how many people will sign bids, it will be more than the 170 bids signed last fall.

“It varies from year to year. In the fall, we had around 170 sign bids,” Kornbau said. “The bid number in the spring is usually a bit higher, because it’s the first semester that first-year students are eligible.”

The recruitment process in general, and eventually being part of Greek life, is something that Kornbau suggests for every student, because it has shaped his college experience.

“For me, personally, it’s very rewarding, because I went through this process of finding a chapter and a group of guys that I really click with, that added a lot of value to my college experience,” Kornbau said. “To be on the other side of that plan and overseeing it and seeing these guys find a group of guys like I did is awesome.”

Editor’s note: A previous version of this story referred to the practice of applying to only one Greek life organization for a bid using the informal term “suicide rush.” The practice’s formal name is “intentional single preference.” The article has been updated to reflect this change.