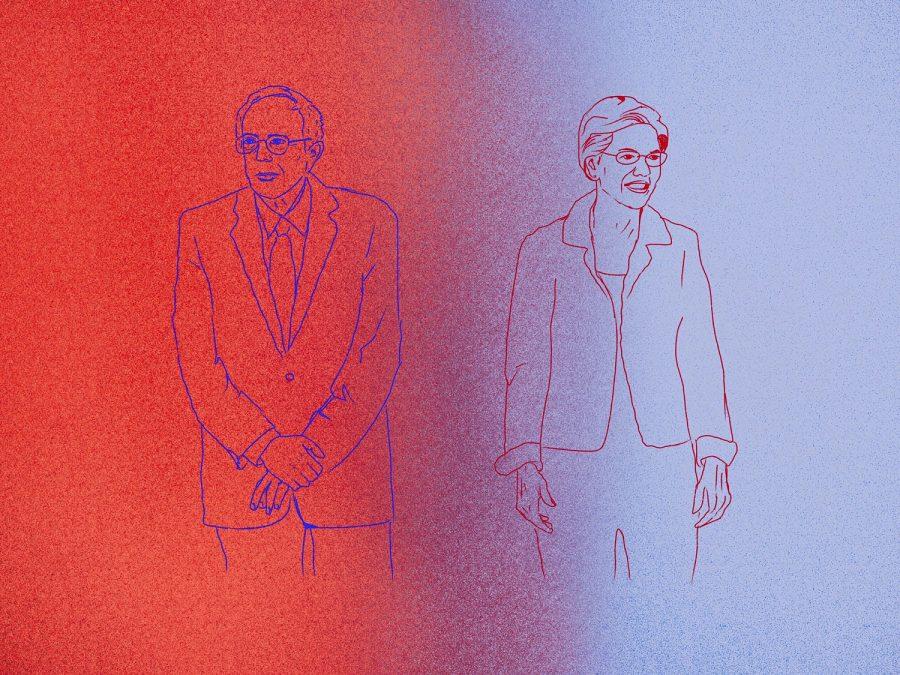 Once upon a time, it seemed as if we could pretend that Sens. Elizabeth Warren, D-Mass., and Bernie Sanders, I-Vt., were not foes, but partners with whom we could ride off into a beautiful sunset — made of debt forgiveness and health care for all — on a gallant steed of political courage.

But alas, not all dreams come true. A CNN report from Jan. 13, claimed that in a private meeting in 2018, Sanders told Warren he did not believe that a woman could be president. As Sanders vehemently denied the claim, tensions between the candidates escalated. The report marks a clear turning point in what has otherwise been a team effort to oust their more moderate rivals.

In light of this claim, progressives can no longer choose not to choose at all. They must actively participate in making decisions — not simply vote “present.” They can’t ‘Tulsi Gabbard’ it anymore. If democratic socialists do not unite behind a single candidate, they risk splitting the electoral pool in favor of moderates like Joe Biden or Pete Buttigieg. We’ve finally reached the fork in the road.

As much as some of us would like to, we can’t vote for two candidates to win the primary. It seems that even the candidates themselves are changing strategies, moving away from forming a united progressive front and toward publicly going after each other on the debate stage.

When a moderator brought up Sanders’ alleged comment during Tuesday’s CNN debate, he once again denied making such a comment. Warren stood by this accusation and said she “disagreed” with his alleged comment. The feud reached its peak after the debate ended, when Warren rejected a handshake from Sanders and, according to recently released audio, exclaimed, “I think you called me a liar on national TV.” The Vermont senator asked to discuss this issue at a later time, before accusing his newfound frenemy of lying as well.

It’s as close to a WWE fight as we’ll get from the 78-year-old New Yorker and 70-year-old from Oklahoma. Unfortunately for Conor McGregor, this seems to be the most important and influential match that took place last week.

It should be noted, however, that the Democratic Party must avoid a repeat of 2016. The looming feud between Sanders and Warren is slightly reminiscent of Sanders’ battle against Hillary Clinton, where some perceive that his critiques of the former Secretary of State eventually led his supporters to vote against her in the general election or not vote at all. In fighting for our votes, both progressive candidates should be wary of forging divides that permeate the election long-term. At the end of the day, both senators are more similar in policy and rhetoric than they are different. Amidst the turmoil, we must not forget that.

So progressive voters must learn to distinguish between the two candidates in a way that does not demonize one over the other. Resorting to arguments that are not based in policy — such as suggesting Warren is not truly progressive because she was a Republican until the 1990s or that Sanders should step aside to allow Warren to become the first female president — is not only an immature strategy, but also fails to actually help voters distinguish which candidate’s policies most closely align with their beliefs.

So far, it seems that Warren and Sanders’ plans diverge on two issues — implementing Medicare for All and national funding for college tuition.

On the issue of health care, both Warren and Sanders advocate for a single-payer option that would provide universal health care to all American citizens. Where they disagree, however, is how to get there. Sanders proposes a 7.5% payroll tax to help accommodate the massive amounts of funding needed to provide health care to every American. He argues this approach is “far more progressive” than Warren’s plan, which aims to allocate businesses’ existing health care payments to the Medicare program rather than raising taxes on the middle class. She combatted Sanders’ claim that this would only hurt employers by claiming her plan would actually lower their overall costs and eliminate human resources expenses associated with providing health insurance.

Both senators are also running on the platform of free access to public colleges and debt forgiveness. Both plans would be funded largely via taxes on the ultra-wealthy. Once again, their campaigns diverge in the small print. Jay Willis, staff writer at GQ and former law associate, explains how Sanders’ plan is a bit broader.

“Sanders, whose embrace of a free-college platform in the 2016 Democratic primary helped propel the idea into the mainstream, has a plan that is both more expansive and more expensive,” he said.

He’s committed to canceling the student debt for any American regardless of their income or wealth. Warren, on the other hand, proposes a means test that covers various amounts of debt based on household income. After $100,000, one less dollar is covered for every three dollars earned. So if you make $130,000 a year, you could recieve $40,000 in debt forgiveness. This program does not apply to the top 5% of earners — households who make over $250,000.

In short, Sanders would alleviate the debt of 45 million Americans from all socioeconomic classes. Warren’s plan would reduce the debt of 39.9 million, of whom 31.5 million would have their debts covered entirely, claiming the top 5% have the ability to fund education on their own.

Voters who feel stuck in the middle should focus on these nuances in policy to decide between the two candidates rather than slip into this trap of “he said, she said” and demonize the other. The time has come for Bernie and Beth to battle it out — hopefully with caution and respect. Progressive voters, choose your fighter.