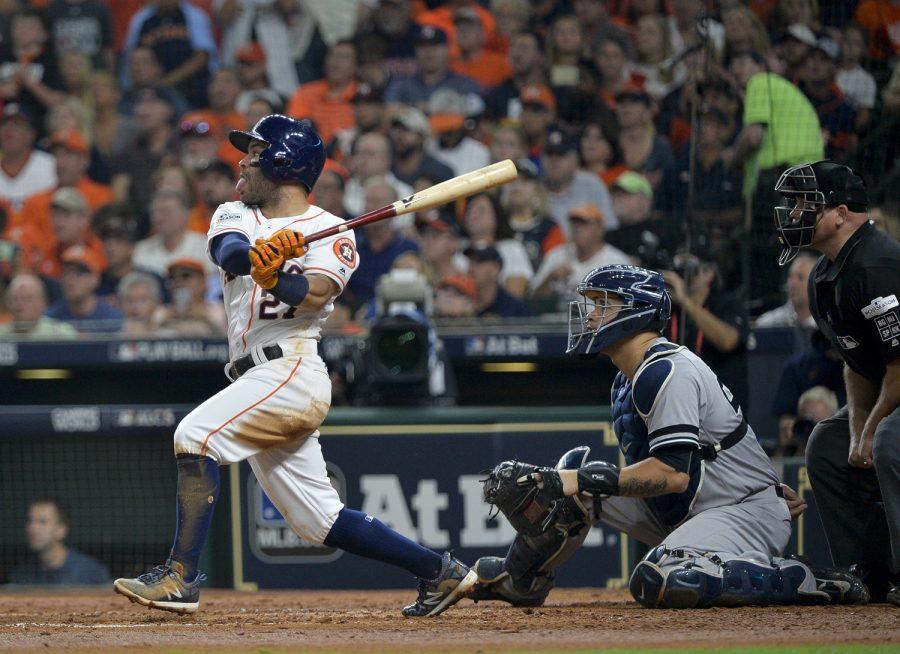 The Houston Astros' Jose Altuve hits a solo home run in the fifth inning against the New York Yankees in Game 7 of the American League Championship Series at Minute Maid Park in Houston on Oct. 21, 2017. The Astros won, 4-0, to advance to the World Series.

By Joe Melillo, For the Pitt News

The date is April 7, 2004. Barry Bonds digs into the batter’s box against Roger Clemens and strikes out looking — the two would never face each other again in an MLB game. At the time, each man is the best at his position and accumulating statistics at a historic rate. Both men end up setting several records while being outed as steroid abusers, and, as of 2020, neither man has been elected to the Baseball Hall of Fame.


Baseball has a long history of cheating — the 1919 Black Sox, Bobby Thompson’s shot heard ‘round the world and the steroid epidemic come to mind. While each of those scandals had implications that shaped the game for years after, they don’t compare to the Astros sign stealing scandal. The game has never seen a team institutionalize a method of cheating and make it their offensive philosophy. History must view the members of the 2017 Astros in the same light as known steroid users — with a giant asterisk.


Steroid users played the game in an era when most of their competition was also breaking the rules — Jose Canseco famously estimated that 85% of major leaguers were “juicing.” What separates the Astros’ scandal from the rest is that Houston appears to be the only team relaying signs to their batters in real time. Have there been other teams that have used video feeds to decode signs? Sure — the Commissioner’s Report suggests up to 10 other teams violated the replay rules.


A significant part of the report describes using covert methods of letting the batter know what pitch is coming, but a much larger question remains — did the sign stealing really provide a competitive advantage?


The short answer is an emphatic yes. FanGraphs provides plate discipline metrics such as O-swing%, Z-Contact%, and SwStr%. These statistics measure batters chasing pitches out of the strike zone, hitting pitches within the zone and swinging strike percentage, respectively. From 2016 to 2017 — when the Astros allegedly implemented the sign stealing system — they improved significantly in each one of these stats. They were chasing pitches less often, hitting pitches in the zone more often and overall swinging and missing less.


The numbers don’t lie — this scandal had an impact on the game equal to or greater than baseball’s steroid scandal. If we are going to be hard on steroid users, then we need to treat the 2017 Astros with the same ferocity. Players like Jose Altuve, who hit .472 at home in the 2017 playoffs compared to a measly .143 on the road, should be banned from the Baseball Hall of Fame. Altuve’s MVP and World Series ring have now both come in a season where his team was proven to be cheating.


Barry Bonds — the game’s biggest steroid abuser — has seven MVPs and has been excluded from the Hall of Fame because he was breaking the rules in those years.

The Hall of Fame should be reserved for those select few players who played the game with an exceptional blend of on-field success and integrity. It’s a place for heroes like Hank Aaron, who received death threats for breaking the home run record, or Jackie Robinson, who put up with constant abuse because of his race. It’s a place for players who play the game fairly.


Steroids? Sign stealing? Let them be remembered only for their infamy, and keep the Hall of Fame a sacred place for the players who were great by their own merit.