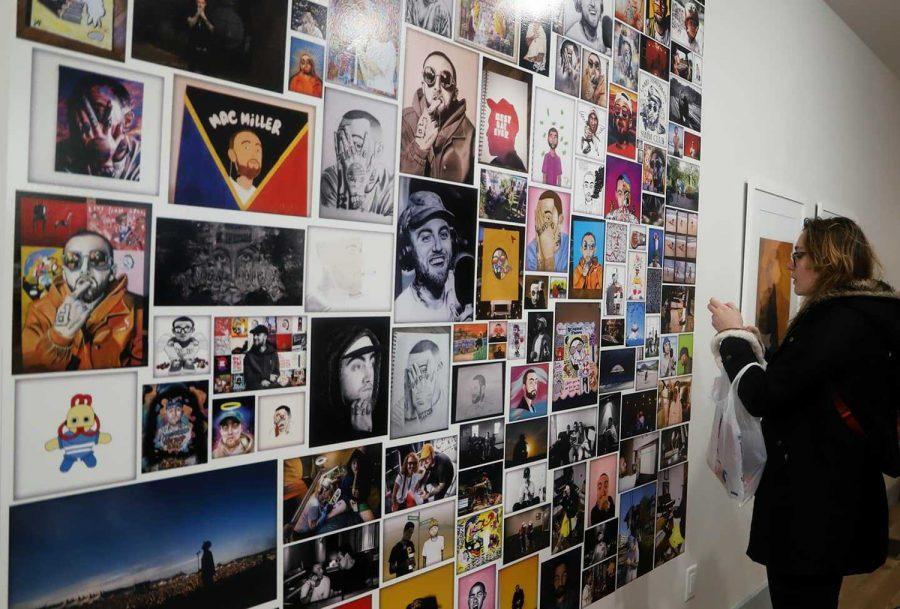 A gallery to commemorate the release of Mac Miller’s posthumous album “Circles” was set up in Pittsburgh’s North Side on Friday and Saturday.

The album, which is the sixth record in Miller’s discography, kicks off with the titular song. It features a smooth, deep acoustic guitar and very light sounding cymbals in the background. Miller’s deep voice sings the words, “Well, this is what it looks like right before you fall / Stumblin’ around, you’ve been guessing your direction.”

In a statement on Jan. 8, Miller’s family announced the release of his posthumous album  “Circles,” and revealed that at the time of his death in Sept. 2018, Miller was “well into the process” of recording the companion album to his last release, titled “Swimming.”  Miller’s producer Jon Brion continued to work on the songs after his passing, keeping their many conversations about the new album in mind. “Circles” was officially released to the public on Friday.

“Good News” — the first single released off the album — dropped Jan. 9, surprising fans with the “good news” of new Mac Miller music and a new album.

The single introduces a tone similar to “Circles,” — it’s a slow, more ballad-like take on Mac Miller’s typical hip-hop and rap tunes. Again, the lyrics might sting for fans who are familiar with Miller’s past.

Throughout his career in the music industry, Miller was open about his struggles with substance abuse and addiction. Miller was found unconscious in his Southern California home on Sept. 7, 2018, after a drug overdose. One year later, police arrested a drug dealer in connection to Miller’s death and found that he sold Miller oxycodone laced with fentanyl.

Listening to “Good News” may now warrant feelings of heartache for fans. The lyrics seem to share Miller’s unhappiness with his life at the time of his death — almost like a silent cry for help.

“Why can’t it just be easy? / Why does everybody need me to stay? / Oh, I hate the feeling / When you’re high but you’re underneath the ceiling,” Miller sings in the first verse.

The lyrics seem to speak to the depression that comes with addiction. Miller continues the song with words about the expectations he felt from the public.

It’s almost impossible to listen to this album and analyze these lyrics without imagining Miller’s struggle. As a fan and fellow Pittsburgh native, Miller’s passing was an incredibly sad thing to watch. His fanbase here in his hometown was, and still is, so deeply dedicated to him, his story and his music.

I thought the songs from “Swimming” — such as “Self Care” and “2009” — were tough to listen to after Miller’s death. The songs from “Circles” take these feelings to the next level. The song “Blue World” on “Circles” features an introduction that will leave many lifelong fans heartbroken.

The song starts with what sounds like a barbershop quartet singing the words, “it’s a blue world without you.” The track then turns into one of the more upbeat tunes on the album, with lyrics that I read as Miller alluding to a possible recovery.

“Yeah, well, this mad world made me crazy / Might just turn around, do one-eighty,” he sings to open the song.

The entire “Circles” album works as a great companion to “Swimming.” “Swimming” featured plenty of slower, emotional songs, which was a departure from his past party hits like “Party on Fifth Ave,” “My Favorite Part” and “Dang!”

“Self Care” was the biggest song off of “Swimming,” with over 189 million listens on Spotify. The song radiates this feeling of being lost, with Miller rapping lyrics like, “I switched the time zone, but what do I know? / Spendin’ nights hitchhikin’, where will I go?”

That lost feeling sticks all throughout “Circles,” with Miller’s talent as a lyricist sticking out as the highlight of the album. His songs continue to tell the narrative of his struggles. The album closes with another emotional song, titled “Once a Day.” The song’s lyrics allude to a relationship, but small pieces of the song also touch on Miller’s drug problem.

Miller’s producer shared that this was the hardest song to remaster following his friend’s death, saying that just hearing him record it the first time was emotional. Brion was waiting outside the studio as Miller rapped and sang.

“I bawled my eyes out. Heard it twice in a row. I kind of poked my head around the door and said, ‘Oh, I heard a little bit of that. That sounds good. Just do a double of that keyboard just right now while the sound’s up. Okay, cool.’ Boom,” Brion shared in an interview with Genius. “Ran out into the hallway and cried again.”

This seems to be a shared experience for many fans listening to “Circles.” Many fans took to Twitter to share their love for Mac Miller, the new album and how much they miss their idol.

User @ohyeahedgar shared, “Finally listened to Circles.. so special. Gave me chills, had me crying in the car.. rip to an honest soul Mac Miller.”

It’s hard to listen to “Circles” without thinking about what could have been, concerning the rest of Miller’s life and career.