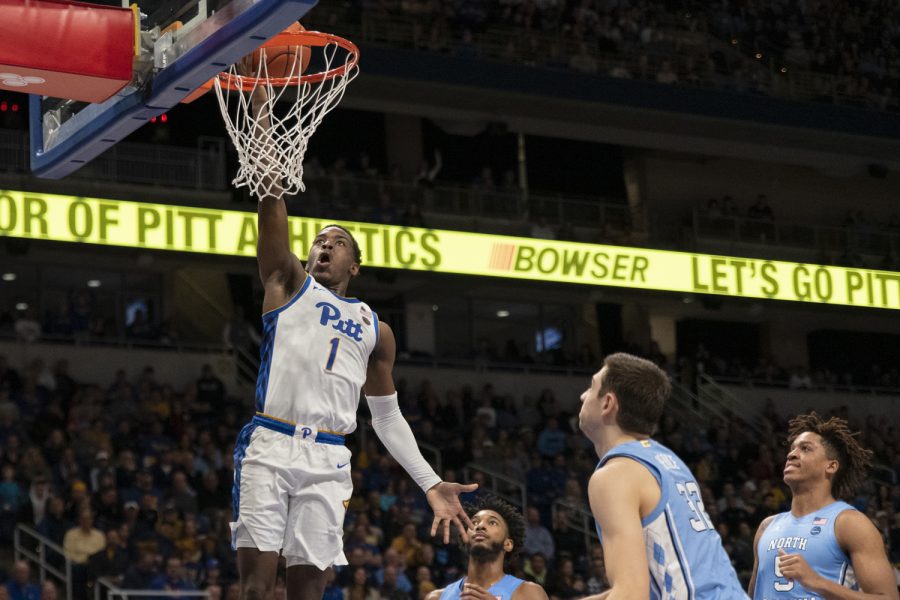 By Tyler Mathes, For the Pitt News

During Robinson’s senior season, he averaged five assists per game and only turned the ball over 1.3 times per game. With a point guard who was careful with the ball, the team averaged 16.6 assists and only 11.7 turnovers per game in 2015-16, an assist-to-turnover ratio of 1.42. In the past three seasons, Pitt has had team AST/TO ratios of 1.19, 0.9 and 0.86, which, to put it lightly, is horrendous.

The biggest difference outside of Dixon taking a new job has been the issue of taking care of the ball. Other than 2017-18, Pitt’s team scoring average hasn’t drastically changed in the past three years, but team turnovers have increased in the same time span.

Any time a team is averaging more turnovers than assists, something needs to change. Since Robinson’s departure, Pitt has been desperately searching for a lead guard who can take care of the ball like Robinson did. Now in their sophomore years, the spotlight shines on Xavier Johnson and Trey McGowens.

Last year, Johnson averaged 4.5 assists per game, which isn’t bad for a first-year point guard, especially when you factor in his 15.5 points per game. But Johnson’s production was virtually negated by the four turnovers per game he averaged last season.

Much of that can be chalked up to inexperience and adjusting to the speed of the game, but it still leaves him at a 1.125 AST/TO ratio. Also, in his first year, McGowens poured in 11.6 points per game and dished out 1.7 assists but added another 2.4 turnovers each game, leaving his assist-to-turnover ratio at 0.71.

Going into the 2019-20 season, Pitt was looking for the sophomore guard tandem of Johnson and McGowens to protect the ball much better than they did the previous season. A point guard whose assist-to-turnover ratio is below 1.5 can’t be considered safe with the ball. In the first half of this season, Johnson and McGowens are taking steps in the right direction. The duo has each upped their assist numbers and X, as he is called by teammates, has improved slightly in the turnover department. However, with the ball in his hands more, McGowens has also turned it over more than last year.

Pitt can fall back on the combined 25.5 points per game the pair averages, but the question remains — how long can Pitt hold up with its turnover troubles? Johnson came into the season with NBA hopes carrying over from last year, but with his scoring production taking a hit and his assist-to-turnover ratio still hovering around 1.29, it seems he’ll likely be back for his junior season.

When looking at elite guards in college basketball, we see the major discrepancies between them and Pitt’s starting backcourt. For example, Tre Jones is Duke’s starting point guard who averages the same number of turnovers as McGowens, yet adds 3.6 more assists each game. Cassius Winston, perhaps the best point guard in college basketball, averages 1.3 more assists and 0.7 fewer turnovers per game than Xavier Johnson.

One could argue that these comparisons are unfair to Johnson and McGowens — yet they both hope to be NBA guards some day. And for Pitt to get back to its Big East glory, it will need its starting backcourt to be much better at taking care of the ball. The Panthers believe they have two elite guards running their offense, but there is still plenty of room for improvement during the back end of the season. An ACC team averaging a 0.97 AST/TO ratio can get much better as the year goes on, and it begins with the starting guards averaging at almost half of those turnovers.

Pitt is still averaging more turnovers per game than assists, and still has a long way to go to get back to where they were in Robinson’s final year. The team can take solace in the fact that McGowens has increased his assist numbers, and even with the increased turnovers, his assist-to-turnover ratio has now broken past one that is the break-even point for this statistic.

It should be noted that when the Panthers play at home, both McGowens and Johnson take care of the ball much better, averaging 0.7 and 2.3 less turnovers per game, respectively. That would seem to be a factor in Pitt being six games better at home than on the road so far this season.

In the second half of the season, Pitt needs its starting guards to limit the turnovers, even with a challenging ACC schedule ahead of them.