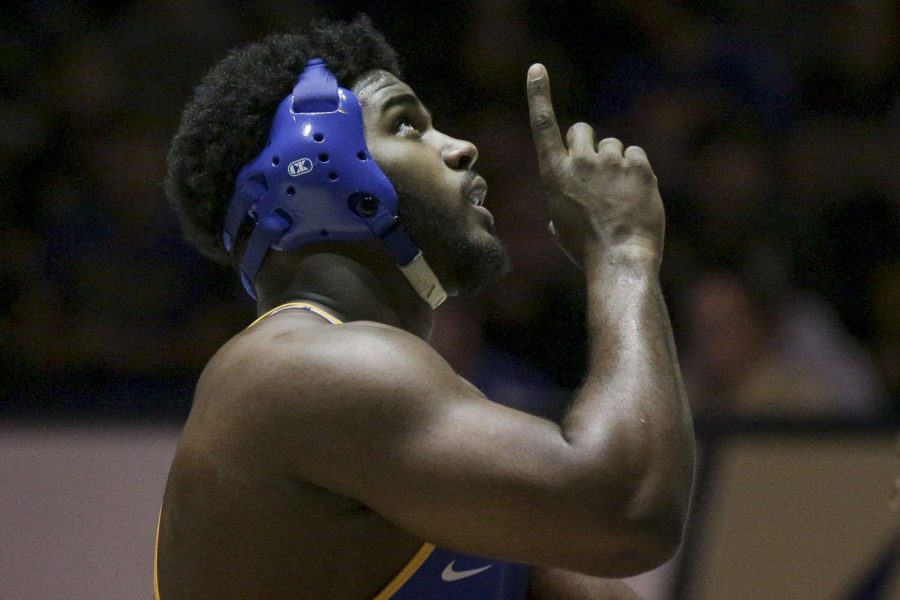 Senior Demetrius Thomas currently sits at No. 8 in the NCAA heavyweight division.

It’s not often that a Pitt team can be considered among the best in its sport.

The men’s basketball team, though improving, hasn’t been ranked since Jamie Dixon left in 2016. Pitt men’s soccer broke into the NCAA Tournament for the first time since 1965 but met its end in the second round — which, despite rising as high as No. 2 in the national rankings, is also when the volleyball team met its sobering end. And Pitt football hasn’t finished a season ranked better than No. 15 since Dan Marino graduated in 1983.

But one Panther team has emerged this season as a formidable force in collegiate athletics, though they partake in a sport that generates little fanfare in comparison with Pitt’s other big-budget behemoths. There have been virtually no students in the crowd at Fitzgerald Field House, and I propose Panther fans rally around their best team of late — Pitt wrestling.

The No. 10 wrestling team has an overall record of 5-2, only suffering respectable losses to No. 4 Ohio State and No. 8 Oklahoma State. The Panthers have thoroughly beaten lesser opponents like Campbell, West Virginia, Drexel and Maryland by a combined score of 117-22. They also squeaked out a tight, one-point victory over No. 11 Lehigh. These performances are even more impressive considering that only two of those meets were at home.

Pitt has also performed well at national tournaments. At the Michigan State Open, 12 of the team’s wrestlers earned spots on the podium with three of them — redshirt first-year Cole Matthews and redshirt sophomores Micky Phillippi and Nino Bonaccorsi — finishing in first place.

At the Chattanooga Southern Scuffle, the Panthers finished an all-time-best fourth as a team and saw six of their wrestlers earn placements on the podium.

Individually, Pitt boasts impressive pieces all throughout its lineup. Two wrestlers in particular stand out among the rest — Phillippi and senior Demetrius Thomas. Phillippi has established himself as one of the best 133-pounders in the country, currently ranked No. 6 with a 16-1 record. Thomas has brought his own ranking up to No. 8 in the heavyweight division as he looks to rebound from last year’s disappointing finish at the NCAA tournament.

A quick note about Phillippi — he has the strongest shot to place near the top at the National Championships this year. His weight class is more up for grabs than usual due to many of its top wrestlers choosing to take an Olympic redshirt and train for the 2020 Summer Olympics in Tokyo. With a few key wins and little bracket luck, Phillippi may find himself in the finals at Nationals come March.

Past Philippi and Thomas, 184-pound Bonaccorsi and redshirt junior Jake Wentzel have become real threats as well. They boast records of 14-2 and 13-2, respectively, and stand at No. 9 and No. 11 on the NCAA rankings. They’ve become solid complementary pieces and have been vital to the team’s recent run of success.

The team even has a few promising first-year wrestlers being groomed to break into the lineup in the coming years, and some of them already have. Matthews and classmates Louis Newell and Luke Kemerer have made great strides as the season has progressed. All three have been thrust into high-pressure roles as starters in the lineup, and all three have proven they are up to the task, with individual records of 10-4, 7-6 and 6-5, respectively.

Promising first-years Austin Cooley, Colton Camacho, Ryan Sullivan and Jared McGill were all highly regarded recruits that the University of Pittsburgh managed to steal away from its competitors, and they haven’t even seen the mat yet. Three of those four had incredible high school careers with more than 100 wins, and they all placed very highly at their respective state tournaments.

To bring it all together, Pitt brought in a new head coach in former NCAA Champion and Pitt graduate Keith Gavin in 2017, and the program hasn’t looked back since. After arriving, Gavin turned the program’s dual meet record around from 4-11 in his first year to 13-3 last year, which included a fourth-place finish at the ACC Championship.

Everything is coming together at the right time for this year’s wrestling team, but the school has yet to give them much attention. Pitt may have something special here in the current program, and it’s time for Panther fans to take advantage of the best winter team at their school.

Wrestling has never been the most popular sport, and it probably never will be. But while the football and basketball teams are disappointing thousands of fans in their enormous stadiums, the wrestling team has been impressing dozens in the Field House. If Panther fans really want to show support for their sports teams, they need to give wrestling a shot, because frankly, they’re all they’ve got right now.