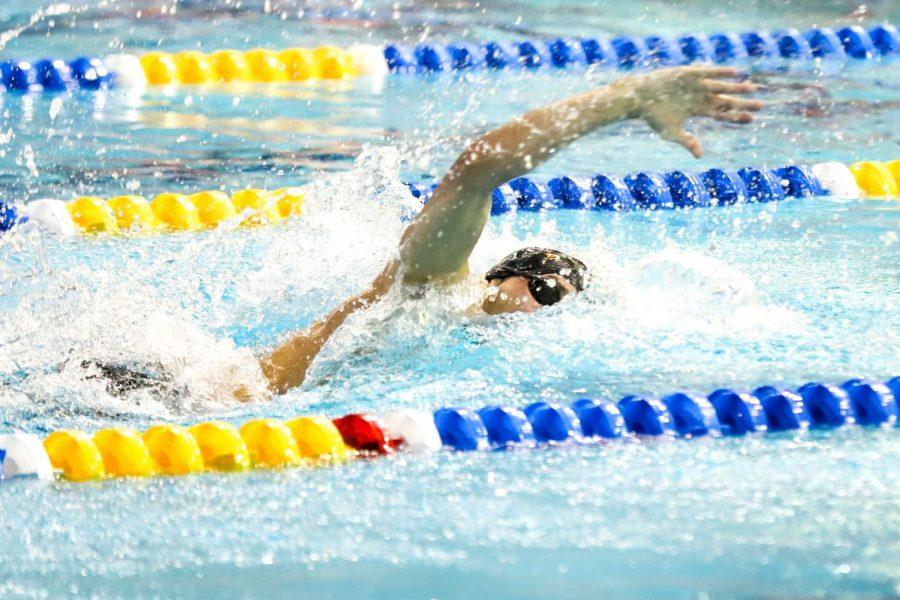 Junior Blaise Vera holds Pitt’s school records in the 50- and 100-yard, as well as the 100-yard butterfly.

By Henry Jackson, For the Pitt News

In its seventh season competing in the ACC, the Pitt men’s swim team is looking to make a statement. And with a squad of veteran swimmers manning the lanes, the Panthers just might have the ability to make that statement this year.

After setting 17 school records at last year’s ACC Championships — and with every single one of those record-setters returning this season — the Panthers have positioned themselves well for another breakthrough season. Head coach John Hargis spoke to his squad’s development Friday afternoon, with his Panthers fresh off a dominant home victory over Division III Denison.

“We want to build off each year. Up to this point, we’ve gotten better every year, and that’s what we want to continue to do,” fourth-year head coach John Hargis said. “To continue to have a very championship-minded program.”

Much of the success Pitt swimming has experienced in recent years can be attributed to Hargis. Through ardent recruiting and the building of a more competitive culture within the program, Pitt has managed to attract a higher caliber of swimmers the team was previously lacking.

Pitt has focused especially on building a stronger sprinting group, the most explosive type of race. Many of the school records set last year came in 50- and 100-yard races, and Hargis has challenged his swimmers to be “intensity driven.”

One such swimmer is junior Blaise Vera. Last year, Vera set four school records and swam on four school record-setting relay teams at the ACC Championship. He was also one of the few Pitt swimmers to swim at the NCAA Championship, where he finished an impressive 24th in the 100-yard freestyle as just a sophomore.

Vera was a highly touted swimmer coming into Pitt, ranked as the top swimming prospect in Mississippi as a senior in high school. He even qualified for the 2016 U.S. Olympic Trials in the 50-meter freestyle, but it was in his first year at Pitt where he began to see drastic improvement.

“It was a lot more focus on details … and understanding my swimming more than I was in the past,” Vera said. “Before it was just get in the water and just try and go fast, now it’s working on details … also making sure I was eating right, doing what I needed to do lifting-wise.”

Vera hasn’t slowed down this season, and briefly held the nation’s best 50-yard freestyle time after a 19.10 sprint at the Purdue Invite on Nov. 21. Associate head coach Justin Andrade noted that Vera’s progression into an elite swimmer hasn’t happened through mere chance.

BEST TIME IN THE NATION ⏱️

“He’s been such a big student of the sport. We’ve seen him develop on a daily basis. He asks a lot of questions and he’s very into what we do in training,” Andrade said. “I think that’s one of the things that sets him out, just how much he’s willing to question the norm of what we do every day, and find ways to get better.”

Naturally, Vera’s success has been a major boost as Pitt attempts to move its program into uncharted waters. But the Panthers do not rely solely on a single swimmer, boasting a lineup stacked with talented upperclassmen.

This season, the team has seen quality swimming from senior Samy Helmbacher, who holds three school records, junior Armin Remenyi, sophomore Cooper van der Laan and senior Eben Vorster — all of whom are also international students. After a victory over Notre Dame earlier this season, the Australian van der Laan described the uniquely American blend of school and sport that most countries abroad lack.

“Back home is nothing like this. You swim for yourself back home,” he said. “To swim for Pitt, it’s amazing. The team atmosphere, with everyone around each other, it’s amazing.”

In fact, Pitt is host to a whole squad of international swimmers. Hargis explained that the coaches travel the world when recruiting, and his efforts have landed swimmers from five continents. The team includes swimmers from Australia, Brazil and France, along with a number of Eastern European swimmers which leave the roster resembling an NHL lineup.

Though Pitt’s swimmers hail from all over the world, once on campus they become part of a close family.

“I’d say it’s a very tight-knit team. Especially over the past two years since I’ve gotten here,” Vera said. “My freshman year we weren’t as close — people were still shy with the coaches changing. But after that we all grew up together, started doing a lot more team bonding and hanging out outside of swimming. These past two years have really just become family.”

The team’s tight-knit nature is also a major boost during practice and training. Friendly competition is part of the reason swimmers such as Vera and Helmbacher have shown so much progress. The coaches especially have been delighted with their swimmers’ in-house competition.

“I think it’s fun,” Andrade said. “It’s great they compete with each other as we continue to grow and build and get better.”

But nothing comes easy in ACC swimming. Pitt is held to a higher standard by perennial powerhouses such as NC State, Louisville and UVA, who dominate the treacherous waters of the ACC.

If Pitt, who is currently ranked just ninth in the conference, wants to make a major move upward, it must continue on its linear path of improvement. The Panthers are not swimming as fast as they were at this point last season, and the school records set at last ACC Championship have yet to be eclipsed this season.

But with two consecutive home meets coming up and three remaining in total, it is yet to be seen how the Panthers will look at the ACC Championship. Swimmers always save their best swimming for the biggest stages, and with the 2020 Tokyo Olympics in sight, the Panthers will certainly be hungry.

In the short-term, Hargis and his staff are willing to deal with the dual-meet losses that come within a stacked ACC conference as long as they see improvement each race. With a vision in place and individual results starting to shine through, the goal of having a nationally competitive swim program is within reach for the first time in years.

“These kids want to represent this wonderful university to the best of their ability, and they do it every day, twice a day, starting at 6 a.m. and going again from 3 to 5 at night,” Hargis said. “It’s a matter of pride to them. They obviously love the sport, they love the University and we want to take the program to heights this university has never seen before.”