The ‘Art’ of Storytelling: Pitt students find their voice by combining art and social media businesses 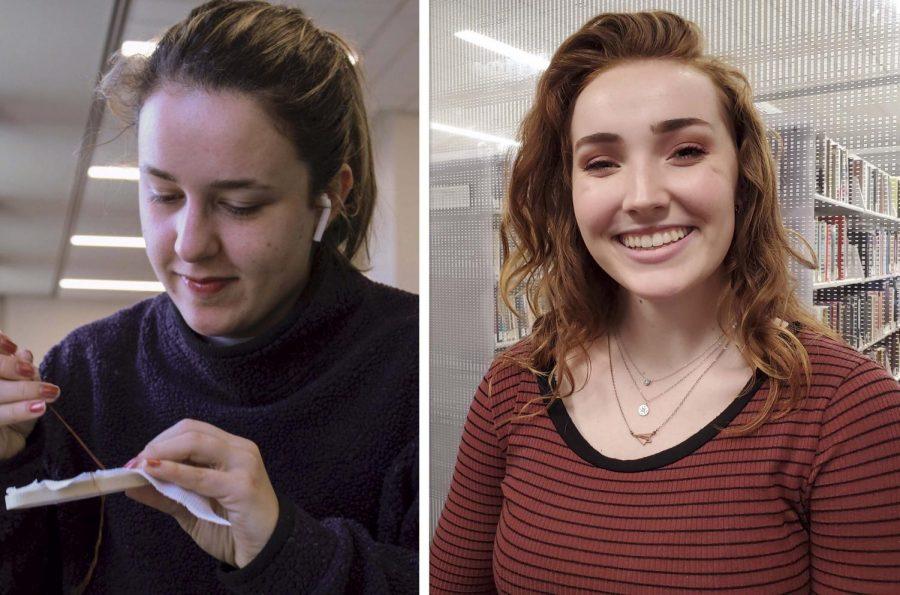 A simple, black honeybee is embroidered delicately at the top left corner of a bright yellow, thrifted T-shirt. The shirt is modeled by a girl in high-waisted shorts, and within minutes of it being posted on Instagram, it’s sold to a happy customer.

For some Pitt students, a love of crafting, art and storytelling has manifested itself into a small business that generates them more than some extra cash — it’s helping them connect with their families and build lasting friendships.

The summer before her first year at Pitt, Sarah McLaughlin, a first-year nursing major, was searching for a way to tell her story through her love of art and drawing. McLaughlin wanted to translate her art into something more functional while also finding a way to share her work with others, so she decided to combine her love of embroidering with repurposing thrifted goods, giving a new spin to these second-hand clothes.

New to entrepreneurship, McLaughlin started her Instagram page @Thredheadd in June 2019. She had embroidered her first shirt and posted it on her personal Instagram page for sale — a follower purchased it in just 12 minutes. Frustrated by her inability to share her art with the world, McLaughlin said she knew that starting her Instagram page would fulfill not only her artistic desires, but would also provide extra income she would need as she was about to enter her first year of college.

“My main goal was to have some way to make art and share it with others while putting a new spin on thrifted clothes, but I was also a broke kid about to go into college so the monetary aspect was definitely a benefit,” McLaughlin said.

Pitt senior Cecilia Kahle also sells her art on Instagram, though in a different form — cross-stitching. In 2017, she created her now lively page @cecandastitch — the account now has 562 followers.  As a nursing major, Kahle said she is used to being occupied with something to do. She wanted to find a way to occupy her time during her winter break sophomore year and found cross-stitching as a nice way for her to be stimulated, but also very calm.

Around this time, Kahle began to venture out into doing more custom work, and ultimately started her transition to the business side of cross-stitching — as opposed to only creating them as gifts, like she did in the past. As she started to develop her Instagram page and people began reaching out to her to purchase her creations, Kahle said she increasingly took to her page to both showcase her latest cross-stitch and to advertise that she would be selling it as well.

“I never had the end goal of making money or [using it] as something I depend on for my living — which makes me really respect artists who do depend on it for their living,” Kahle said. “Fun is my number one priority. If I make a little bit of money that’s like, a really great perk and really nice and flattering but it’s also — I try to remember where it started, and it just started as gifts.”

Kahle picked up her first needle and thread during her senior year of high school to create her first ever cross-stitch. Coming from a very creative family, Kahle learned to cross-stitch from her mother, who always carries a craft with her — whether she’s quilting, cross-stitching, or embroidering.

“I think it runs in the family a little bit,” Kahle said. “It’s also the best hobby — very biasedly I think that. I pick it up as easily as I pick up my phone — and I try to pick it up more than my phone as much as I can.”

McLaughlin’s craft also keeps her busy — she typically creates one to two custom pieces each week. While most of her customers, who are mainly Pitt students, tend to request original designs, McLaughlin sometimes gets requests for duplicates of pieces she’s already made. But she said she strives to maintain her originality — often marked by natural designs like flowers, bees, mountains and the sun — even within her duplicates by changing up the colors of the designs and adding different small details.

“I try to change up the colors or I’ll add little touches,” McLaughlin said. “Either way all of my designs are original unless a customer asks for a replica of a photo design.”

While McLaughlin strives for originality in her art, Kahle sees her cross-stitches as a means to tell a story. Whether she’s telling the stories of others through custom work that is requested from buyers, or using her stitches to display feminist messages, like “Empowered Women Empower Women,” Kahle takes full advantage of her skill and passion to create something more meaningful than how it may appear.

“For centuries it’s [cross-stitching] been ‘women’s work’, so it’s cool when I add feminist messages in the cross-stitch, because it’s kind of a lot of symbollism of like — women have been told for centuries that the only type of art or work that they can do is sewing and knitting and that type of thing,” said Kahle. “But now I’m kind of like ‘ha, but look what I can say’ when I’m doing it.”

When it came to having her story told through an artistic medium, it was a no-brainer for Marlo Postufka, a first-year German major, who felt immediately drawn to Kahle’s cross-stitches. After suffering a tragic loss of a close family friend in 2018, Postufka said she was able to find some sort of light from the situation, as it united her and her now-boyfriend. Since suffering the loss, Postufka always felt hesitant to talk about her story with others — until she met Kahle.

“Cece was the sweetest person ever about it and she wanted to make sure it was perfect for me — which was really important to me because she didn’t know it at the time but it is a really difficult story and something I didn’t want to be messed up with,” Postufka said.

Postufka always felt drawn to personalized gifts because of the meaning they hold. As her relationship’s one-year anniversary approached, Postufka felt instantly attracted to the idea of purchasing a cross-stitch of Chinese lanterns with their anniversary date to represent when they truly formed a connection, not only because of how unusual and durable the gift is, but because of the artistic medium’s way of representing stories.

“Cece really wants to just know her customers and know their stories. She doesn’t do it just because it’s a business for her, she does it because she wants to make people happy,” said Postfuka. “She really brings stories and feelings and emotions to life.”