A way-too-early prediction of Pitt’s 2020 season 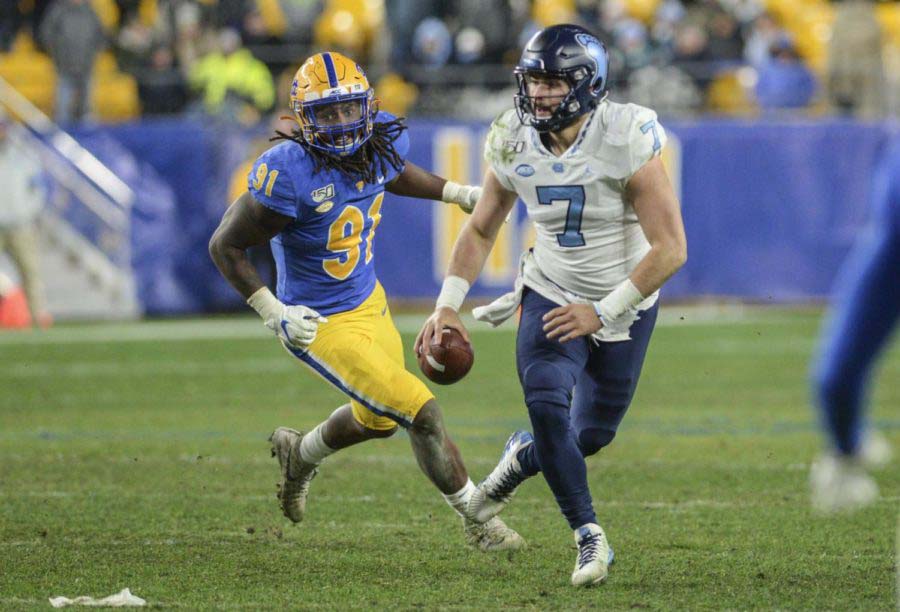 The Panthers are bringing back 17 starters, including defensive studs Paris Ford, Jalen Twyman, Damar Hamlin and Patrick Jones II, for the 2020 season.

Pitt football’s 2020 schedule was finalized Wednesday morning as the Atlantic Coast Conference released its full slate of matchups. Now that the Panthers’ matchups are set in stone, it’s time to wildly speculate on how their season will unfold.

Predicting the outcome of Pitt football games is an admittedly fickle task. Last year, the Panthers took down a red-hot UCF team but also fell to below-average Miami and Boston College squads — and needed a late game-winning drive just to beat Delaware, a middling team in the FCS.

While the Panthers are often unpredictable on a week-to-week basis, it’s actually not hard to guess how many games they’ll win over an entire season. In my preseason prediction last year, for example, I nailed Pitt’s 7-5 regular-season record despite whiffing on half my individual game predictions.

Pitt has won between six and eight games every year since 2010, with the exception of a 5-7 season in 2017. Over the last decade, you’ve basically had the same odds of accurately predicting Pitt’s overall wins as you would winning a game of rock, paper, scissors.

But with the Panthers bringing back 17 starters — including defensive studs Paris Ford, Jaylen Twyman, Damar Hamlin and Patrick Jones II — fans have begun to cautiously murmur about the prospect of a mystical nine-win season.

There’s no denying that the defense is legit. But Pitt’s ability to score points on offense will be what determines if the program can take a stride forward. The jury is still out on offensive coordinator Mark Whipple’s pass-happy system that saw the Panthers average a pitiful 21.2 points per game last season — 114th out of 130 FBS teams.

So, will a top-10 defense be enough give Pitt just its fourth season since 1984 with nine or more wins? Or will the offense remain anemic and spoil any hopes of cracking the top-25 rankings? Continue on, dear reader, to learn the answer.

Make no mistake — the Red Hawks of the lesser-known Miami are no pushover. They beat Central Michigan last season to win the highly competitive Mid-American Conference and finished with an 8-6 overall record.

The Red Hawks are led by rising sophomore quarterback Brett Gabbert. You might recognize the name — he’s the younger brother of famed NFL flameout Blaine Gabbert. The younger Gabbert didn’t exactly light it up in his first season, throwing just 11 touchdowns and eight interceptions.

Gabbert will struggle mightily against a stacked Pitt secondary as the Panthers take care of business in their home opener.

Hailing from the Conference USA, the Thundering Herd finished last season with an 8-5 overall record and shared two common opponents with Pitt — Ohio, who they beat 33-31, and UCF, who bested Marshall 48-25 in the Bad Boy Mowers Gasparilla Bowl.

Pitt has only played Marshall once before, a 2016 matchup at Heinz Field that the Panthers won 43-27. This one should go about the same way.

Richmonds is an FCS team who has finished each of the last two seasons with a losing record. If the Panthers fall to them at home, Narduzzi should be fired before he gets off the field.

There’s no good reason to pick the Panthers to lose this one. They’ve had Duke’s number since joining the ACC, beating them in six of seven meetings. The Blue Devils went 5-7 last season and aren’t expected to improve drastically in 2020. Pitt wins at Heinz Field to stretch its win streak to four games.

I’m picking Pitt to lose here if for no other reason than I can’t picture them winning five straight games. Plus, in the same way that Pitt has made a habit of beating Duke, Miami has consistently gotten the better of the Panthers, maintaining a 5-2 series advantage in ACC play.

Defense has never been an issue for the Hurricanes, but they finished last year with an underwhelming 6-7 record thanks to a sluggish offense that averaged just 22.6 points per game. Those scoring woes should be eliminated entirely, however, thanks to two crucial additions this offseason — graduate transfer quarterback D’Eriq King from Houston and offensive coordinator Rhett Lashlee from SMU.

King was one of the nation’s most dynamic quarterbacks at Houston in 2018, when he accounted for an FBS third-best 50 touchdowns while throwing for 2,982 yards and rushing for another 674. With Lashlee, who guided the seventh-highest scoring offense in the FBS last season, calling the shots, Miami’s greatest weakness is now a strength. Pitt loses its first game of 2020 in a tough road environment.

I know, I know. The Fighting Irish are set to be one of the best teams in the country in 2020, with a realistic shot at making the College Football Playoff. There’s no way Pitt could possibly beat them.

But hear me out — with one of the best defenses in college football, Pitt will have at least a chance to beat any opponent on its schedule. For the Panthers to pull off the upset, they’ll have to harass redshirt senior quarterback Ian Book and rely on a couple splash plays on offense to pull ahead.

It’s a tall order considering Notre Dame was one of the most complete teams in 2019, ranking No. 13 in scoring offense and No. 12 in scoring defense. And after throwing for 3,034 yards, 34 touchdowns and six interceptions in 2019, Book should appear on most preseason Heisman watch lists.

It’ll come down to the wire, as 10 of the past 12 Pitt-Notre Dame games have been decided by single digits. But the Panthers are no strangers to playing the role of spoiler, and they’ll utilize a little Heinz Field magic to beat a top opponent for the second straight season.

The Yellow Jackets were due for a rough year in 2019 after switching from long-time head coach Paul Johnson’s patented triple-option to the scheme of new coach Geoff Collins. They showed flashes of potential, including a 28-21 road win over Miami, but still finished the season with an ACC-worst 3-9 overall record.

Collins might have Georgia Tech heading in the right direction, but the program is still years away from completing its rebuild and competing with top teams. Pitt wins this one by double-digits at home.

After decades of serving as a bastion of football consistency, Florida State has fallen into disarray. The Seminoles went 5-7 in 2018 and 6-7 in 2019, marking the first time since 1976 that they had consecutive losing seasons.

After just one full season at the helm, head coach Willie Taggart was fired last season with four games left to go. Despite playing in a typically tough away atmosphere, the Panthers will take advantage of a Seminoles team lacking continuity and an identity.

This one could really go either way. The Hokies bring back most of last year’s 8-5 team that embarrassed Pitt 28-0, including talented signal-caller Hendon Hooker.

There are two factors, however, that fall in favor of Pitt — homefield advantage and the departure of long-time Virginia Tech defensive coordinator Bud Foster. The Panthers are 5-1 all-time against the Hokies at Heinz Field, with their last win coming in a 52-22 rout in 2018.

And with the almost mythical Foster no longer roaming the sideline for the first time since 1987, it’s possible Virginia Tech experiences a minor dip in production. At the very least, his retirement means TV announcers will have to find something else to talk about.

The true first-year quarterback had a remarkable season in 2019, throwing for 3,641 yards, 38 touchdowns and seven interceptions. His potential is scary, and he’ll haunt Pitt and its fans for years to come. The Panthers broke their UNC curse in 2019, but notching consecutive wins over a Tar Heels team improving quickly under head coach Mack Brown is a dubious proposition.

Virginia has never been a very exciting team but managed to ride the coattails of its talented senior class — headlined by quarterback Bryce Perkins, linebacker Jordan Mack and defensive back Bryce Hall — all the way to an ACC Coastal title last season.

Those players are gone now, along with the Cavaliers’ luster.

Though head coach Bronco Mendenhall retains much of last year’s Coastal-winning core, it still has the feel of a rebuilding year in Virginia due to the departure of that star trio. Pitt adds a win on the road.

Can you think of anything more Pitt-esque than losing to a mediocre Syracuse team in the season finale? I can’t. Turnovers, penalties and inexplicable miscues will have Panther fans ripping their hair out just as they started to think their team could do no wrong.