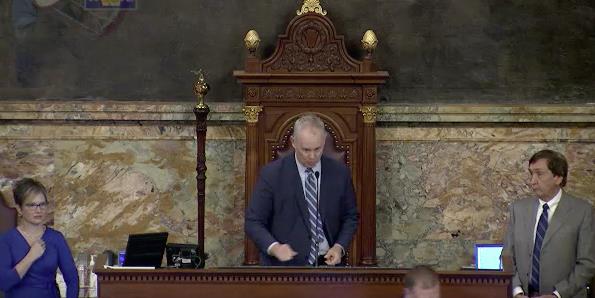 The speaker of the Pennsylvania House of Representatives, Mike Turzai, R-28, announced Thursday that he will not seek re-election this year and instead work in the private sector. He made the announcement at a press conference in McCandless, located about 30 minutes north of Oakland.

Turzai said he makes his decision about running for office with his family each year, and decided this year that it was time to leave.

“Every two years, we check it out,” Turzai said “Over the course of this year, we said, you know, it may be time for others to take the torch … to pass it on.”

He said at the press conference that he has neither plans to resign immediately nor a current offer for a job in the private sector.

“I’d like to be on that other side of that line, where I’m actually in the middle of it,” Turzai said. “To create those jobs and see an organization thrive and to have people just do their best to take care of their families and give back to their communities.”

Turzai served nine terms in the House, winning his first seat in a 2001 special election. He became majority leader in 2011 before moving to his current position as speaker in 2015. He also briefly ran for governor in 2018, before then-state Sen. Scott Wagner ultimately earned the Republican nomination.

House Minority Leader Frank Dermody, D-33, said in a statement that he and Turzai have been friends for decades.

“While the political battles go on, I understand and respect his choice to go down another path in the future,” Dermody said. “House Democrats will continue working to achieve our plan for Pennsylvania and expect the speaker to preside over the House fairly.”

During his career in the state House, Turzai has consistently advocated for pro-business, anti-tax policies such as additional tax credits for private school scholarships and not taxing Pennsylvania’s burgeoning natural gas industry. He has also pushed for privatization of the state-owned system of liquor stores operated by the Pennsylvania Liquor Control Board.