Pittsburgh Against Fascism in India holds protest at Frick fountain 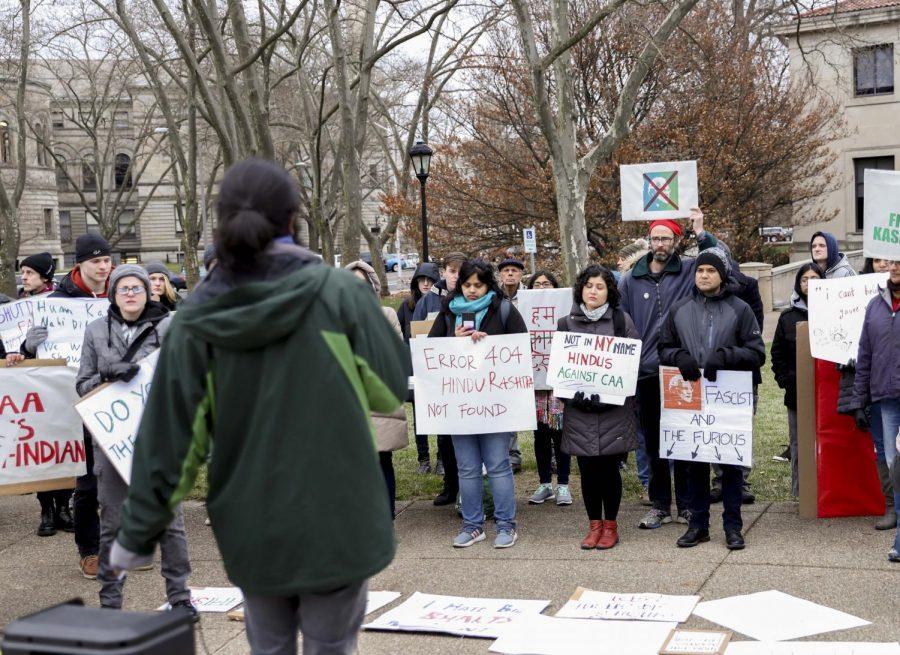 Demonstrators gather around Abhishek Viswanathan, a second-year PhD student studying Information Science, to listen to his speech about the importance of protesting in places like Pittsburgh as well as India against fascism.

Dozens of Pitt students, faculty and community members gathered on a cold Sunday afternoon around the fountain outside the Frick Fine Arts Building to chant “Aazaadi, Aazaadi” — “freedom” in Hindi — for India’s population of nearly 200 million Muslims.

Pittsburgh Against Fascism in India organized the event to protest growing fascism in India. The group also hosted a three-hour teach-in last Friday at Posvar Hall. About 200 people attended to learn more about India’s current political state, including country-wide protests and recent attacks on universities, such as the Jan. 5 attack at Jawaharlal Nehru University in New Delhi.

The protest coincided with the 70th celebration of Indian Republic Day, a national holiday commemorating the day when the Indian Constitution was enacted. The protest in Pittsburgh was just one of many worldwide protests against the recently passed Citizenship Amendment Act, which grants citizenship to many religious minorities throughout India, but excludes Muslims.

India’s prime minister, Narendra Modi, is a member of the Bharatiya Janata Party. Since entering office in 2014, Modi and the BJP have pushed for nationalist Hindu values, often disenfranchising the country’s Muslim population.

Silpa Mukherjee, a doctoral candidate in Pitt’s film and media studies program, had a very personal link to the attack on JNU earlier this month — two of her former professors were injured by the attackers. In her eyes, the protest Sunday was a great success.

“The spirit of it lies in the solidarity, people standing close to each other, sharing that kind of closeness and warmth and energy. There was so much energy today, even outside in a big space,” Mukherjee said.

Abhishek Viswanathan, a second-year doctoral student studying information science, spoke at the protest about the importance of protesting the act not only in India, but in places like Pittsburgh as well.

“Ours is not the only protest happening on the 26th of January,” Viswanathan said. “Across India, there are thousands of people in thousands of places joining together to protest this.”

After organizers passed signs with various sayings such as “Free Kashmir” and “No Modi-fying the constitution,” the protest began with improvisational chants led by Mukherjee and Sritama Chatterjee, both Pitt grad students.

Chatterjee, a doctoral candidate in the English department, said the chants were advocating for freedom for all people in India, especially those currently held in detention camps.

“Pittsburgh is one of the cities joining a global movement against fascism,” Chatterjee said. “In India right now, there are detention camps being built and people have already died inside these camps.”

Viswanathan pointed out how this violence — holding people who cannot prove that they are citizens if their name does not appear on the National Register of Citizens — infringes on many people’s rights.

“The constitution of India has a preamble that designates India as a sovereign socialist secular democratic republic,” Viswanathan said. “Some of those rights are under assault right now.”

Uma Satyavolu Rau, a senior lecturer in the English department, read the preamble — which specifically secures liberty of thought, expression, belief, faith and worship — and pointed out the hypocrisy in the CAA targeting specific religious groups.

“I always took for granted that we would believe in the things this says,” Rau said, before reading the document.

The many speakers at the protest continued to emphasize the importance of solidarity. Krystle Knight, a community organizer for the Thomas Merton Center, a Pittsburgh-based non-profit which seeks to raise social justice questions, was one of these speakers.

Knight added that Americans should be aware of the issues in India and in other countries, since what happens around the world can affect them, too.

“There’s this global fascism that’s on the rise. Maybe you’re not directly impacted by it right now, but our liberation is bound within one another,” Knight said. “None of us will be free until all of us are free.”

Chatterjee said it was encouraging for her to see people from many different nationalities attend the protest, not just Indians.

“I think this is a situation not just exclusive to India,” Chatterjee said. “It’s a problem that is worldwide.”

For Viswanathan, the Sunday protest gave him hope that the movement against fascism was picking up speed.

“I was really happy to see the outpouring of support from everyone. I think more people now get it — it being that we need to put out a strong front of resistance to the rise of global fascism and the marginalization of oppressed groups and minorities,” Viswanathan said.

Pittsburgh Against Fascism in India organizers said they plan to continue their work past the Friday teach-in and Sunday protest. In the upcoming weeks, the group will hold open dialogues and brainstorming sessions around campus to discuss updates on the CAA and fascism in India.

“Individuals can feel powerless, but my hope for the future is that people actually see that there’s strength in numbers and our struggles are all interlinked,” Viswanathan said. “I think that’s what we saw today.”