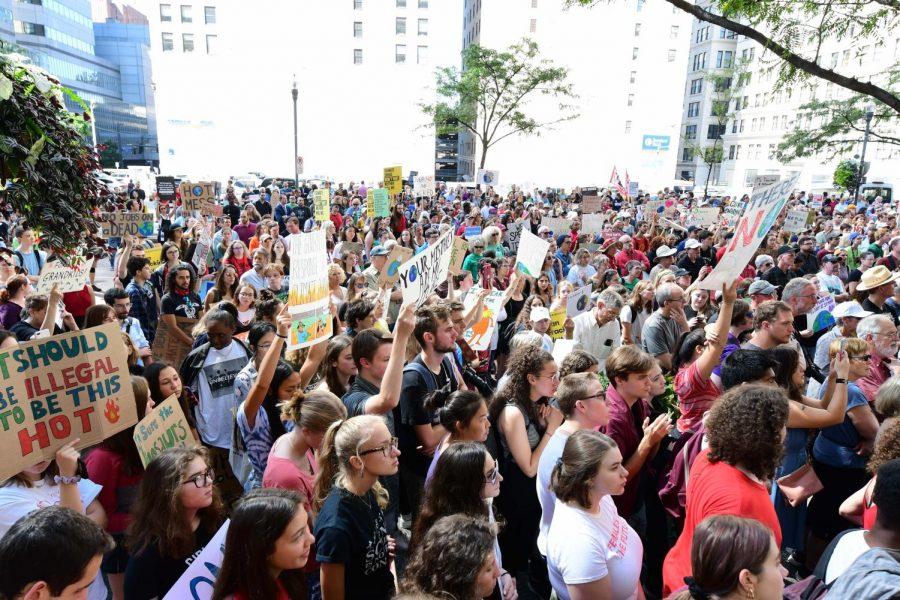 The climate march in Pittsburgh fills the street outside the City-County Building in September 2019.

An Associated Press photo of four climate activists went viral over the weekend. The reason? All the girls pictured were white, though if you look closely, you can see Vanessa Nakate, a Ugandan climate activist, cropped out of the photo.

The photo — which included activists Greta Thunberg, Loukina Tille, Luisa Neubauer and Isabelle Axelsson — sparked a debate not only about blatant racism, but also a much larger issue within the climate change movement. Studies show people of color are disproportionately affected by the climate crisis. But it’s also true that they are represented in the movement far less than white people. A more diverse representation is needed in the climate movement, and recognition of people of color — who are also leading the movement — is vital.

Communities of color are more likely to breathe polluted air and be located in close proximity to coal plants and other toxic waste sites, according to Green America. When the BP oil well burst in the Gulf of Mexico in 2010, BP hired private contractors to clean up the tar and refuse from the polluted coastline, Michael Bullard, a professor at Texas Southern University, found in his research. Most of the waste “was trucked to landfills mostly in black communities in Louisiana and Alabama and Florida,” he said. Bullard says this using black communities as a wasteland was a case of history repeating itself, too.

Recently, Pulitzer Prize finalist Elizabeth Rush published an entire book about the climate crisis — specifically rising water levels and their disproportionate effect on communities of color. She documents cases like this on Staten Island in New York, Miami, Maine and all along the West Coast.

The problem with representation isn’t a lack of people of color working in climate activism. While Thunberg has become the center of the youth climate movement, there are actually plenty of students of color who have been doing the same amount of work as Thunberg, for the same amount of time. They’ve just been pushed to the sidelines by the media.

Take, for example, Jamie Maragolin, a 17-year-old first-generation American who is queer, Jewish and Latina. She’s a co-founder of the climate action organization Zero Hour. There’s also Mari Copeny, from Flint, Michigan, who wrote to Barack Obama in 2016 and asked him to help with their water crisis. And Xiye Bastida, born outside of Mexico City, where flooding, due to environmental destruction, was the norm. She skips school every Friday to protest at the United Nations as part of Fridays for the Future initiative. Her passion is keeping indigenous people at the forefront of the climate conversation.

And of course, one of the many other activists of color is Vanessa Nakate, the girl who was cropped out of the AP photo. For several months, she protested alone about the climate crisis outside the gates of the Parliament of Uganda. Nakate founded the Youth for Future Africa and the Africans Rising.

This isn’t to say that white people shouldn’t speak up in the climate movement. But equal representation and media attention should be given to the people of color, who are taking an equal part in the movement — especially when they are the ones at the forefront of the climate crisis.