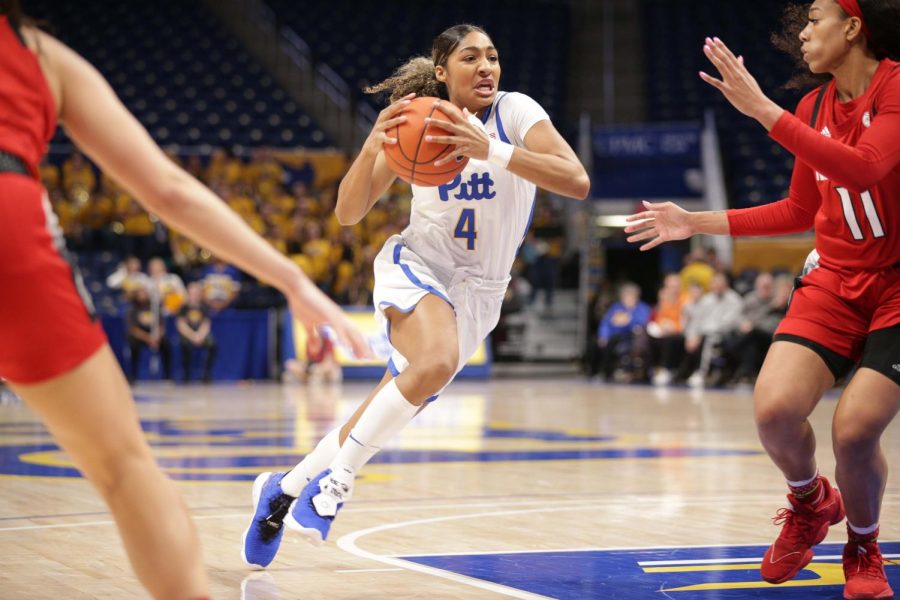 With the loss to No. 5 Louisville, the Panthers (3-16 overall, 0-8 ACC) extend their losing streak to 12 games on the season and remain winless in conference play in womens’ basketball.

Pitt women’s basketball took on No. 5 Louisville — another of the ACC’s elite — on Sunday and was outplayed easily on both ends of the court, leading to a 83-49 blowout defeat on the road.

With the loss, the Panthers (3-16 overall, 0-8 ACC) extend their losing streak to 12 games and remain winless in conference play. The Cardinals (19-1 overall, 9-0 ACC) had four scorers lead the team — tied at 12 points each, six players in double digits — dwarfing the Panthers’ one double-digit scorer. Pitt even had four players see minutes and fail to score.

Pitt started off on top, leading 7-4 in the first two minutes of the first quarter, thanks to layups from first-year guard Dayshanette Harris and junior center Cara Judkins as well as a 3-pointer from redshirt senior guard Aysia Bugg.

The Cardinals were able to change the game in their favor by employing the press after going down early, causing the Panthers to turn the ball over six times, rush possessions and take bad shots.

Despite going down, Bugg hit her second 3-pointer of the quarter, the 102nd of her career, moving her to 10th place in school history for all-time 3-pointers made.

Pitt started the second quarter by going back to its original game plan — slowing the game down to exploit Louisville’s defense. This helped Pitt to keep Louisville within eight at the media timeout, with 4:31 remaining.

But, just like the first quarter, Louisville went on a run, 13-4 this time, to close out the period and lead 41-24, earning full control going into the second half.

Louisville was extremely efficient in the second quarter, shooting 64.3%, far exceeding Pitt’s 5-23 shooting from the field and an abysmal 12.5% from behind the arc.

The Panthers trailed the rest of the game, struggling to score and defend against a much more experienced and talented Cardinals team. It also didn’t help that the Panthers turned the ball over nine times in the third quarter.

The Cardinals continued to score in the third quarter, shooting 52% from the field and taking advantage of opportunities from the free throw line, making six of their eight attempts.

Louisville was able to establish a 30-point lead at the end of the third quarter, allowing the Cardinals to slow the game down going into the fourth quarter for the victory.

The bench was crucial to the Cardinals’ success throughout, adding 24 points, while the Panthers could only get five points from their non-starters. This is why the fourth quarter was still in favor in the Cardinals, 17-14, despite the star players sitting out for most of it.

Pitt was only able to make nine of its 30 shot attempts. The Panthers’ slim success in the second half came from the foul line, where they shot 83.3% in the fourth quarter.

The lone Panther standout player was Harris, who has led the team in scoring these past two games, earning 18 against Louisville and 17 against NC State in the previous game.

Harris has been one of the few bright spots for the Panthers, with her two most recent performances coming as welcome indicators of her future as the face of the program.

Pitt will return home to start a three-game homestand beginning with a Thursday night game against Duke. Tipoff is scheduled for 7 p.m. at the Petersen Events Center.