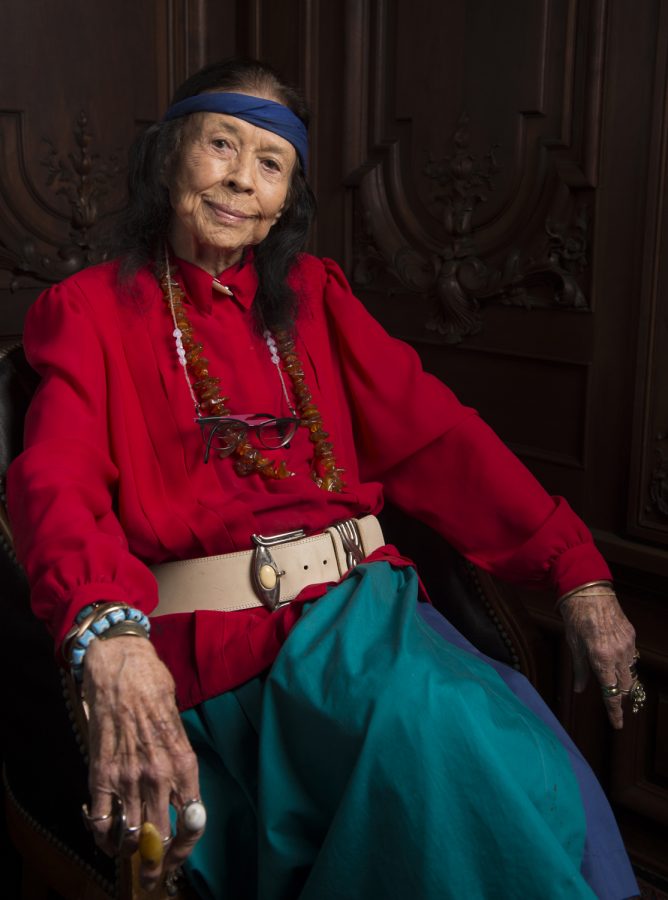 Maxine Bruhns served as the Nationality Rooms director for 54 years before retiring in the beginning of January.

She watched the international news on BBC and Al Jazeera America, looking for developments to fill her staff in on. Each morning, according to her assistant Maryann Sivak, she greeted those working in her office with a salutation in a different language, and then she taught them the correct response. Her life before becoming the director of Pitt’s Nationality Rooms shaped the legacy that she will leave behind.

Maxine Bruhns, Pitt’s former director of the Nationality Rooms, officially retired on Jan. 1 after a 54-year career at the University. Bruhns, 96, is the second person to ever hold this position. According to Cristina Lagnese, Nationality Rooms scholarship administrator and head of nationality room committee relations, a job posting will be available soon and then the vetting of candidates will begin. Bruhns did not respond to interview requests for this piece, though many of her colleagues and friends described her impact at Pitt.

E. Maxine Bruhns, originally E. Maxine Moose  — of Grafton, West Virginia — attended West Virginia Wesleyan College for one year before leaving to work in an aircraft factory after the Pearl Harbor attacks. She received a philosophy and psychology degree from the Ohio State University in 1946.

After college, she met and married Fred C. Bruhns. Together, they traveled around the world while Fred worked for the International Refugee Organization to resettle refugees. While traveling — living in places like Lebanon, Jerusalem, Vietnam, Cambodia, Iran, Greece and Gabon — Maxine taught English, learned the native languages and acted in local theaters. The couple moved to Pittsburgh in 1965 so that Fred could finish his Ph.D and teach at Pitt’s Graduate School of Public and International Affairs. According to Sivak, it was at this time that Maxine became the second director of the Nationality Rooms.

Michael Walter, the Nationality Rooms tour coordinator, the advisor to the Quo Vadis club and a 1994 Pitt studio arts alum, said Bruhns revamped the position into what it is today.

“Once she got the position, it became her entire life. At the time, the Nationality Rooms program was kind of moribund. There weren’t new rooms being created, there wasn’t reaching out into the communities and forming new committees,” he said. “[Maxine] had described it to me as a part-time, two-day-a-week job in a broom closet in Bruce Hall. And then from there, she transformed it into a living program again.”

Under her tenure, 12 new Nationality Rooms were built, including the Israel heritage, Armenian, African heritage, Ukrainian, Austrian and Japanese rooms. Two more rooms — the Finnish room and the Iranian room — are currently in the works. Bruhns traveled to almost all of the countries that now have rooms, aside from Wales, Switzerland, Korea and the Philippines.

Dr. Heinz Kunz, a professor emeritus at the University’s medical school and former member of the Swiss room council, said Bruhns always made time to get to know international ambassadors and students so that everyone could have the opportunity to learn about other cultures.

“She continued, her staff too, that these rooms became known to not only sight-seeing people, but to the young people around, to the students,” Kunz said. “I think that the way the world is right now, the ups and downs everywhere, especially in politics, I think it’s important that students learn the cultures of other countries.”

The Nationality Rooms scholarship program was created by Ruth Crawford Mitchell, the founding director of the rooms. But under Bruhns’ direction, the amount of Scholarships for Summer Study Abroad recipients grew from three to 54, plus several grants, in 2019.

Lagnese said Bruhns loves to go out and experience the world herself and attributes that to the growth in the scholarship program.

Sivak said Bruhns’ commitment to educating students about other countries did not stop at the Nationality Rooms scholarship program. She personally donated more than $2.5 million to Pitt, as well as funding four scholarships to her high school alma mater, Bridgeport High School, for women in their senior year and four summer study abroad scholarships at West Virginia Wesleyan College.

Bruhns spent time not just educating people, but also building personal relationships with them. Jennie-Lynn Knox, whose father was one of the founding members of the Irish room, said that Bruhns was more than just a colleague to many — she was a close friend.

“When there were events going on when I was little, I used to tag along with Dad, so I was always with them. She’s so much fun — her quirkiness is just grand,” Knox said. “She’s one of those people who says ‘jump,’ I say ‘how high.’ She’s made me a stronger woman. She believed in me.”

Mark Nordenberg, Pitt’s chancellor emeritus, recounted that at each chancellor’s concert in December, Bruhns would introduce him to international students on scholarship.

“That may seem like a little thing, but you know, even in that social setting, she was so committed to making certain that those students made connections with everyone they could and got the most out of their experiences here at Pitt,” Nordenberg said. “That really is reflective of the approach Maxine took to her work.”

“She was very open-minded and she always said that we all came from somewhere to America and that we need to see the richness that the immigrants, each culture, brought to enrich American culture,” Sivak said.

On the Cathedral of Learning’s third floor, there is a display documenting Bruhns’ life and her work at the University. In her days of retirement, according to Sivak and Walter, Bruhns plans to stay busy by writing a book, creating a foundation, editing articles and papers for those in the department and continuing to donate to charities, especially those focused on animal rights.

Nordenberg said the legacy Bruhns is leaving behind is a major part of University history.

“She also will be leaving the power of her own example, of how to maximize the presence of these rooms in order to build relationships that will be beneficial in a range of ways,” Nordenberg said. “She has had an ability to bond with all kinds of people, to connect them to the University and the programs of the University that is distinctive and certainly will be missed.”