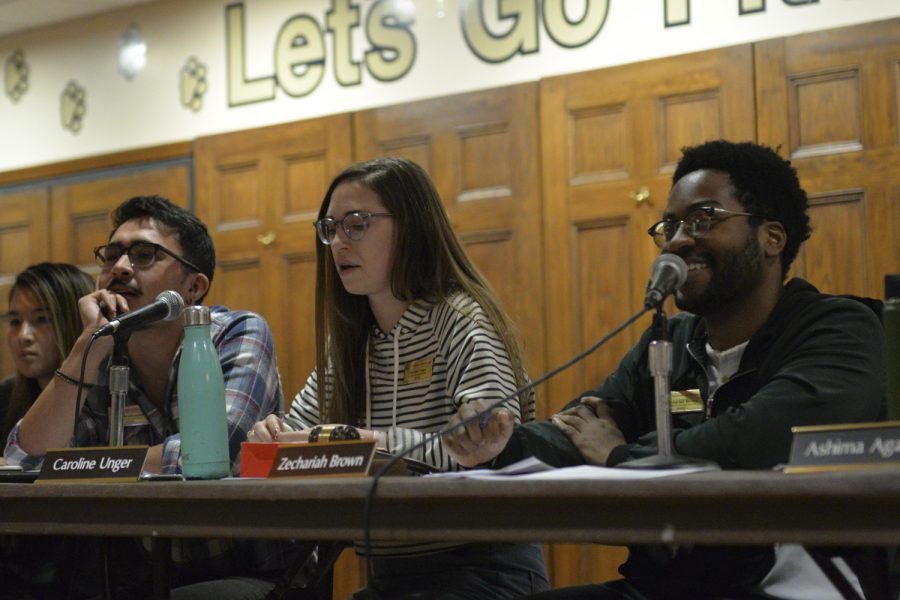 SGB has yet to reach a compromise with the SORC on the Center’s new naming guidelines for student organizations that were introduced last semester.

By Anushay Chaudhry, For The Pitt News

Student Government Board kicked off their meeting Tuesday night with an announcement from President Zechariah Brown that he had met with SORC coordinator Lynne Miller to discuss SGB’s proposed solutions to new naming guidelines.

According to Brown, he met with Miller last week, but declined to elaborate on the content of the meeting. As of now, SGB’s proposals have been brought directly to Dean of Students Kenyon Bonner for review, Brown said.

SORC’s registration guidelines prohibit the names of independent student organizations from including University trademarks or wordmarks like “Pitt” and “Panther,” instead encouraging clubs to use phrases such as “at Pitt” or “at the University of Pittsburgh.” According to a proposal from SGB, the naming guideline is said to potentially affect 15-18% (117) of student organizations on campus.

The board released three possible solutions to the problem at its Nov. 5 meeting, with its preferred solution being to utilize SORC to approve names and marketing materials for clubs that want to “co-brand” — allowing the use of University trademarks or wordmarks as long as sponsorship is not implied or stated.

Following Brown’s opening remarks, board member Cedric Humphrey said he met with the associate dean of the Dietrich School of Arts and Sciences, John Twyning, to discuss possible future policy changes that would allow students to be paid for internships while also receiving academic credit. DSAS policy currently prevents students receiving academic credit from internships to be monetarily compensated as well. Those who do take on internship credit when they are not taking other classes still have to pay additional student fees.

“Students have to pay the University tuition if they want to receive internship credit which includes a technology fee, transportation fee and wellness fee which is automatically applied to student’s tuition even if they are not on campus during the summer and don’t necessarily need to be paying for that,” Humphrey said after the meeting.

Community and governmental relations chair Tyler Viljaste announced that his committee will be hosting an Immigrant and Student Resources Panel on Feb. 11 from 5-6:30 p.m. in WPU Dining Room A.

“It’s going to feature a lot of University departments like the Office of International Studies, Pitt police and some representatives from different cultural organizations who are going to talk about different issues in the immigrant community,” Viljaste said.

Elections chair Nick Bibby reminded students running for SGB positions this spring about the campaign workshops being held Saturday and Sunday from 1-1:30 p.m. at WPU 848 in the SGB conference room.

Additionally, Bibby mentioned a finalized campaign finance plan that was discussed with Brown and SORC. The initiative will offer $125 in grants per candidate, meaning that a group of four candidates running together in a slate can receive up to $500 in funds.

“This election financing system is very important to elections chair Bibby and myself, as a candidate who ran and dealt with the financial constraints of not always being able to afford everything that you’d expect in an SGB presidential or board campaign,” Brown said after the meeting.

Newly elected judicial chair Stephen Jacobus met with Brown before the meeting to discuss possible changes to the Constitution and the Governing Code regarding policies affecting students in the College of General Studies and their eligibility to run for board and committee positions. This issue was brought before the board last semester, and Jacobus said that he is hoping for a vote that allows CGS students to participate in SGB activities next week.

Additionally, Brown discussed Resolution B.R.2020.07, titled Statement of Support for Sami’s Law, which is co-sponsored by the Pennsylvania Association of State Related Students. The House bill, Sami’s Law, was introduced after the passing of New Jersey resident Samantha Josephson, a student at the University of South Carolina, who was kidnapped and murdered by a man who claimed to be her Uber driver. The legislation aims to require that rideshare drivers have a front and rear license plate, a scannable quick response or similar code on the windows for riders to verify that they are entering the correct vehicle, among other instruments meant to protect riders.

“The University of Pittsburgh Student Government Board, on behalf of the over 100,000 students at the Pennsylvania state-related institutions represented by the Pennsylvania Association of State Related Students (PASS), urges Congress to pass [Sami’s Law],” the document reads.

American Marketing Association
$4,985
$4,976.70
AMA is requesting for registration, airfare, lodging and miscellaneous costs to attend a competition in New Orleans.