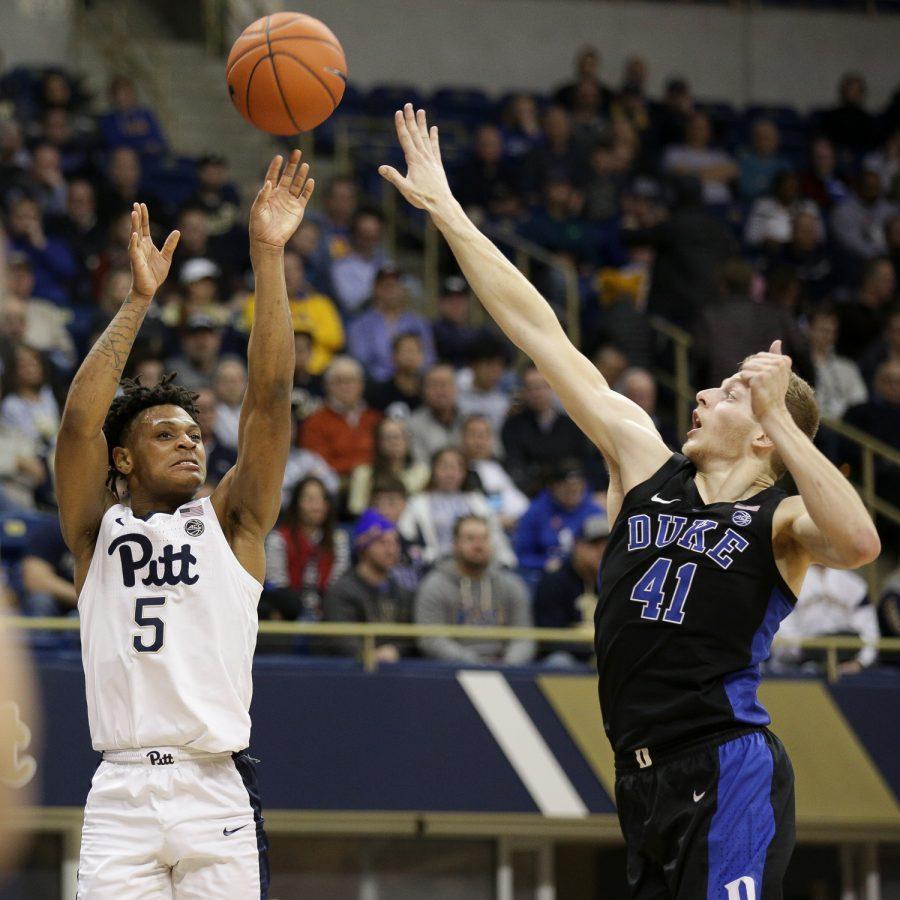 On another somber night of basketball following the tragic death of Kobe Bryant on Sunday, Pitt men’s basketball head coach Jeff Capel and the Panthers traveled to Cameron Indoor Stadium to take on No. 9 Duke Tuesday night. Capel looked to show that after a mediocre — yet simultaneously promising — first season, his team may be ready to put up a fight against the big dogs of the ACC.

The Panthers indeed brought the fight, battling back from an 18-point deficit to draw within three points late in the game. But even a career-high 27 points from sophomore forward Au’Diese Toney wasn’t enough for Pitt to steal a win against the Blue Devils (17-3 overall, 7-2 ACC), and Capel fell 79-67 in his return to the place where he played and coached for more than 10 years.

Before tipoff, Duke held a moment of silence for Bryant and his 13-year-old daughter Gianna, who both died in a helicopter crash in Calabasas, California, Sunday morning. The silence lasted 24.8 seconds in honor of the two numbers Bryant wore during his 20-year career for the Lakers, 24 and 8.

Both teams also wore commemorative warmup jerseys with the number 8 on the front and 24 on the back.

Once the game got underway, Pitt employed its signature hard-nosed defense, slowing Duke’s scoring pace while also struggling on offense. From the tip, though, first-year Duke center Vernon Carey Jr. showed he would be a problem for the undersized Panthers. The 6-foot-10, 270-pound behemoth scored 11 of the Devils’ first 13 points.

Pitt was not to be denied either. A transition 3-pointer from the first-year forward Justin Champagnie and a dime from Toney to junior center Terrell Brown cut an early Duke lead to two. Toney followed that up with a contested three to give the Panthers a 12-9 lead. The game’s first 11 minutes saw seven lead changes.

Momentum began to shift in favor of the home team when, with 8:33 remaining in the first half, sophomore Duke guard Tre Jones used his off arm to get to the rim and score.

In a display of anger and emotion due to what he believed to be a missed offensive foul call, Capel rushed over to the official and placed his hands on him, earning a technical foul that sent Jones to the free-throw line.

Duke proceeded to unleash a barrage of shots from beyond the arc. Choosing to play off rather than getting beat to the rim, the Panther defense watched as Duke nailed four threes in a row to crack open a 40-28 lead.

A highlight reel alley-oop from sophomore guard Trey McGowens to Toney briefly silenced the Cameron Indoor crowd, but the Blue Devils maintained a comfortable 11-point lead and went into the halftime locker room up 45-34.

The Blue Devils effectively shut down McGowens and fellow sophomore guard Xavier Johnson for the first 20 minutes, as the two combined for only seven points. Meanwhile, Toney went into the break with eight points on several impressive plays.

Duke opened the second half with yet another three to extend its lead. But if the Blue Devils’ impressive 3-point shooting defined the first half, then their ball movement defined the second half. Pitt’s defense couldn’t keep up with the speed of its ACC foe as Duke got to the rim at will. A Carey dunk and a putback slam from first-year guard Cassius Stanley extended the lead to as many as 18 points.

The Panthers started to find their groove on the other end of the floor, with Toney and Johnson speeding up the pace and getting to the rim in transition. Toney added another highlight-reel dunk to his mixtape from the game and drained another 3-pointer, picking up the slack of his fellow sophomore stars.

As Capel’s squad has been wont to do since he took over, the Panthers clawed back to bring the deficit to single digits. Johnson dished an assist to Toney for a 3-pointer and Pitt forced a turnover to give Champagnie a wide-open dunk, forcing Duke head coach Mike Krzyzewski to call a timeout with his team’s lead narrowed to five.

With Pitt down 70-65 with just under four minutes to go, Duke got its lead back to double digits in a hurry. A Stanley three, a Duke block on the other end and a mind-boggling Pitt turnover on its next possession sunk the Panthers’ valiant comeback attempt.

In the end, despite Toney’s monstrous game, Duke’s nine threes from six different players and Carey’s dominance ultimately sealed the deal. Quiet games from Johnson and McGowens — only 11 combined points — prevented Pitt from putting together a complete offensive effort to combat the depth of the Blue Devils and Carey’s 26-point outing.

The Panthers (13-8 overall, 4-6 ACC) get another shot to match last year’s win total when they host the Miami Hurricanes at noon on Super Bowl Sunday.