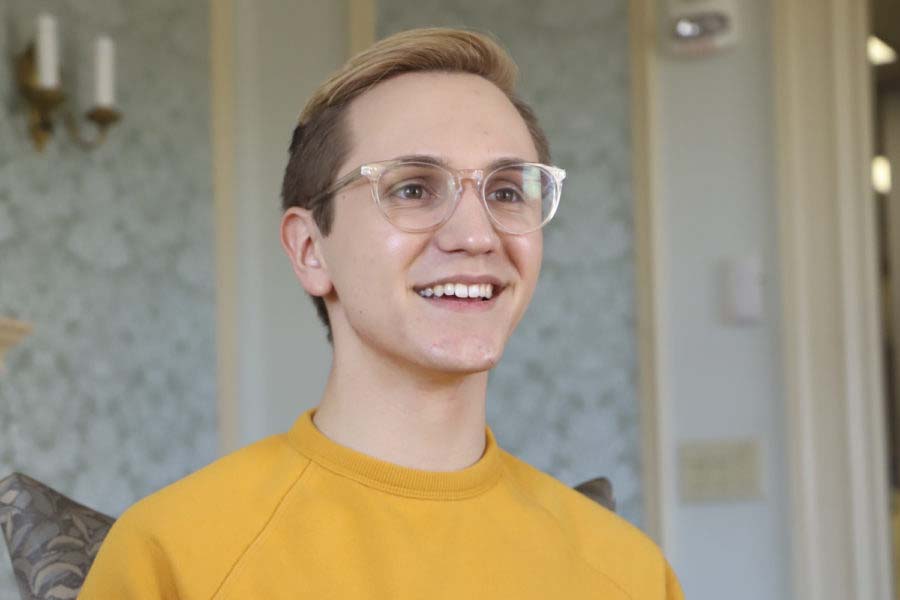 Junior Stevie Kisty has been voted Best RA two years in a row in the Pitt News’ “Best Of” survey.

Emily Hearty, sophomore bioengineering major and Brackenridge resident assistant, said Stevie Kisty was more than just her RA her first year — he was a personal inspiration.

“Stevie’s programming and his attitude and the fact that he really cares and has conversations with his residents, he was definitely the glue that stuck all of us together the first couple of weeks and caused us to become really good friends,” Hearty said “I’m an RA now, and he inspired me to be an RA.”

For two years in a row now, Kisty has been voted Best RA through The Pitt News’ “Best Of” survey. Each November, a survey is open until winter break with a variety of options for students to nominate as the best around the University, Oakland and Pittsburgh.

Stephen “Stevie” Kisty is a junior economics and biology major from Pittsburgh. He volunteers at UPMC Presbyterian Hospital and researches evolutionary ecology. Kisty has served both of his years as an RA in Sutherland Hall West — Floor 9 last year and Floor 6 this year — as well as living there his first year. This year, he is serving as Sutherland Hall’s lead RA, meaning that he has additional responsibilities like monitoring the team dynamic, overseeing other RAs and scheduling duty tours.

Kisty said in an interview with The Pitt News and WPTS Radio that his first “Best Of” win last year helped confirm what was working in his RA style, so that he could refine and focus on it for this year.

“I thought last year I didn’t deserve it, and I feel the same this year, but I am so happy and so thankful,” Kisty said. “It really confirmed to me that everything I was doing was right, and I should continue doing the things I know I do well. I just kind of took everything I did last year and applied it to this year, and it’s working again so far.”

Some things have changed, though. Kisty explained last year that one of his favorite programs, a Bob Ross painting night, was not only fun for his residents but a lesson for him in planning. As a self-described type-A personality, he was thrown for a loop when all of his planned University partners and outside vendors fell through and were not able to help out with his program.

Although everything worked out in the end, this program shaped Kisty’s RA style for this year. He learned that he needed to have a little more flexibility in planning programs and activities for his residents. Now, he’s less rigid in his planning and schedules events based on what his residents want and need at that time.

For Kisty, his current position is more than just a job description. He said being an RA is all about building up interpersonal relationships with different kinds of people.

“I know a lot of people have this visual of us. We’re the big jerks on campus who bust down doors and stuff, but like, yes that happens occasionally, but that’s the part of my job that I don’t like the most,” Kisty said. “At the center of it, being an RA is all about being there to support other people and helping them with rough transitions or bad grades or breakups or just literally anything or just being there and being that little personal cheerleader in their pocket at all times.”

Becoming an RA at Pitt is no small feat. There is a GPA requirement of 2.5 and the application, which is followed by individual and group interviews before applicants are eligible to be an RA. RAs are compensated through a meal plan and a room in the building to which they are assigned. Their responsibilities include regular assignments, non-routine weekends, non-routine assignments and duty tours.

Kisty said in an email that the experience of being an RA has changed his college experience through valuable life lessons.

“I think the biggest way I’ve changed is that I have become much more aware of myself,” Kisty said. “When I first started this position, I saw myself as a caring, empathetic person, but I was afraid that I was going to have a difficult time with the more emotionally draining aspects of it. I have had to really become very in tune with my emotions and how I am doing before I can help others.”

One of Kisty’s goals as an RA is to build a strong rapport with his residents. He focuses on being open and relatable. He also works on building a community of trust and respect, not just between himself and the residents, but between the residents themselves.

For his residents, Kisty said that it’s all about helping them develop and change into better versions of themselves.

“My biggest goal for being an RA is just personal growth. It doesn’t matter what area it’s in, whether it’s academically or discovering a new love that they have for a hobby. Just being able to, at the end of the year, say, ‘Here’s where I started, here’s what happened, and now here’s why I’m a better person,’” Kisty said.

Justin Vallorani, the resident director of Sutherland Hall, said Kisty’s impact doesn’t stop with his residents, but radiates to everyone in that community.

“Stevie, when he does something, he really does it to the best of his abilities. And that has really done well to serve our community,” Vallorani said. “I would say that, especially in a lead RA role, we have a staff that is three-fourths new, and he was able to mentor them and make sure that they felt comfortable in the role. Stevie is so humble that you wouldn’t necessarily know all these things unless you actually work with him — he’s so humble but does so much to support others.”

While the lead RA role has administrative tasks, it also has a large focus on fostering relationships with other RAs. Kisty calls the RA staff he works with more than just coworkers, but some of his closest friends.

Sydnie Davis, sophomore biology and chemistry major and Sutherland Hall RA, said by living in Sutherland Hall last year, she had been exposed to the positive energy and leadership that Kisty has.

“During duty tours and everything, he would stop and talk to us, which is something a great RA really demonstrates — not only the ability to get to know your own residents, but everyone in the building,” Davis said. “Him getting to know everyone on a personal level is what really makes him a great RA. Stevie definitely leads by example, and that’s something I really admire.”

Next year, Kisty will not be serving as an RA. Instead, he will use the time to relax, enjoy his last year of college life and apply to medical schools. In the meantime, he gets to enjoy what he describes as the most rewarding aspect of his job — getting to help residents overcome barriers and seeing them change over the course of the year.

“The most rewarding thing is whenever someone’s struggling, whether academically or socially, and them being able to come to you,” Kisty said. “But then also seeing that all the way to the end when they finally overcome that barrier. It’s just like night and day — you can see a completely different person, from the beginning to the end, which is so amazing.”