Jazz Studies: The rest is history 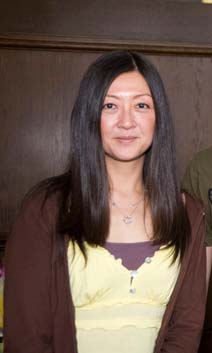 Yoko Suzuki has taught History of Jazz for the past three semesters.

When she first moved to Pittsburgh, Nicole Mitchell had to stop by the DMV in order to get a Pennsylvania driver’s license.

Her routine errand turned into an odd coincidence when she told the employee there that she was a newly hired Pitt professor. He shared that he’d taken the History of Jazz class there more than 30 years before — without knowing she worked for the music school, much less that she would be teaching the class.

More than 300 students sign up for History of Jazz every semester, which was voted “Best Class” in The Pitt News’ “Best Of” survey this year. The course offers an introduction to the bulk of the history, theory and instrumental classes in Pitt’s Jazz Studies program. Mitchell, who joined the staff as director of jazz studies in July 2019, is reinterpreting her section of the class to take students on a thematic journey instead of a walk through time.

Adam Lee, a TA for the class and a jazz studies Ph.D. student, said the new format makes it easier for students to connect to the material.

“Now we can say, ‘Hey look, here’s some race, sex, gender issues that might pertain to your life, but this is how it pertained to people’s lives back then and musically this is how they’re expressed,’” Lee said.

It’s a change from the past three semesters, when professor Yoko Suzuki led her section of the course on a chronological history of jazz. According to Suzuki, most students don’t realize the modern-day corollaries that the class’s lessons hold. Learning about genre traditions in jazz from the 1920s, students are able to better understand the musical styles of modern artists, such as Beyonce and Lizzo.

“I just want [the students] to understand that [jazz] is still relevant,” Suzuki said. “The music genres they listen to these days, R&B, hip-hop, they’re all really related to jazz.”

This universal aspect of jazz keeps the subject open to nonmusician students. Suzuki said she appreciates the accessibility of the class — students across the University are learning to look at music a new way.

More than just music can be traced back to the traditions that surround jazz. According to Lee Caplan, a TA for the class and a jazz studies Ph.D. student, themes found in jazz allow the class to talk about past and present social issues.

“Music is the gateway to talk about more contemporary social issues,” Caplan said. “We talk about things that might happen in the ’20s … but I connect all those themes and issues to things that are happening now.”

In class, students tackle these issues head-on. Mitchell focuses part of the class on jazz women like Ma Rainey, Bessie Smith and Ethel Waters and issues such as gender, sexuality and race are often addressed in assigned readings.

Alex Brogan, a sophomore finance and accounting major who took the class last spring, said the class was relaxing.

“It was a class where you could kind of breathe and learn and not feel pressure,” Brogan said.

In fact, every member of the history of jazz staff is a musician in their own right. Nathan Davis founded the jazz studies program with the idea that musicians would teach the classes, according to Suzuki. According to Brogan, the talent of professors and TAs in the program does not go unnoticed.

“[Suzuki] plays jazz herself so I think that was cool … someone who actually practices and plays what they teach,” Brogan said.

According to Caplan, in a recent class, Mitchell sang blues lyrics written by the students. Ari Freedman, a sophmore neuroscience and music major who took the class with Suzuki in fall 2018, said the live music played in class allowed students to connect.

“[Suzuki] was able to bring her instrument to perform with her TAs,” Freedman said. “This definitely made me, and I think other students, more interested in what was being presented because we saw jazz in action.”

According to Freedman, Suzuki asked him to scat over a song. With a TA on the guitar and Suzuki on the sax, they created a live band in class. And, according to Suzuki, it’s easier than most realize to see live jazz, and it’s played by everyone.

More than learning to enjoy the music, Mitchell said, the goal of the program is to help students develop a broader cultural and musical worldview.

“This is an opportunity for them to be exposed to a lot of things they haven’t heard before,” Mitchell said. “I really hope they keep listening.”