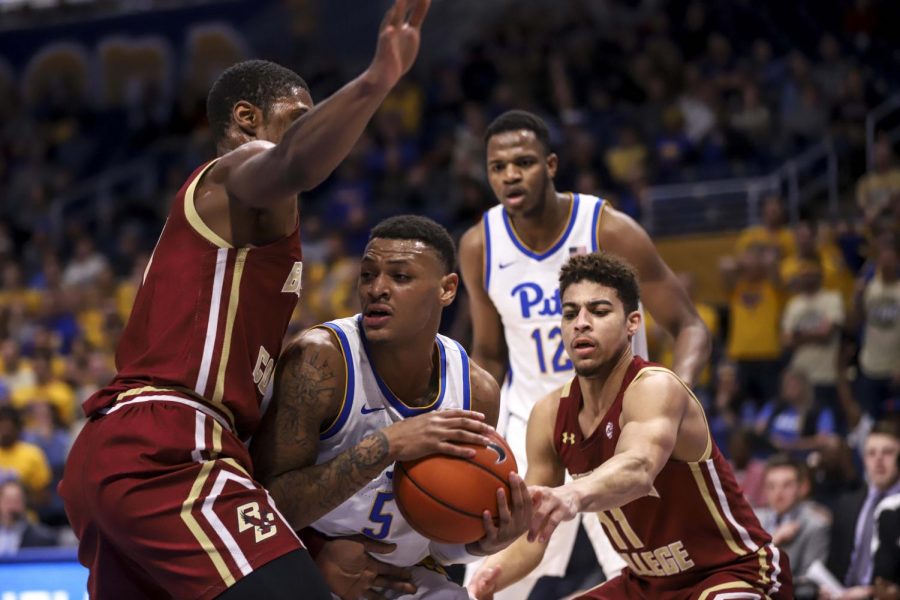 Sophomore guard Au’Diese Toney looks for his next move between Boston College’s defense.

Pitt men’s basketball head coach Jeff Capel arrived at his alma mater Tuesday night with a largely effective game plan, though his Panthers still fell to Duke 79-67. But while Pitt had its downfalls in the loss, a double-digit margin of defeat does not adequately tell the whole story.

Like all of Duke’s opponents this season, the Panthers were faced with the daunting task of neutralizing first-year center Vernon Carey Jr., one of the most talented players in the country. Pitt’s game plan on both ends of the floor revolved around Carey, and rightfully so. The 6-foot-10, 270-pound big man is top five in the ACC in points, rebounds, field goal percentage and blocks. Capel made the decision that if any Duke player was going to beat his team, it would have to be someone other than Carey.

Defensively, the Panthers packed the paint. They started the game in an interior-centric man-to-man defense, sagging off the perimeter and crashing in on Carey when he received the ball. This defensive scheme also limited dribble penetration and encouraged outside shots from Duke guards Tre Jones and Jordan Goldwire, who are both underwhelming from deep.

Unfortunately for Pitt, containing a player like Carey is easier said than done.

The future lottery pick opened the game scoring 11 of Duke’s first 13 points, which even included an uncharacteristic 3-pointer. Panther big men Eric Hamilton and Terrell Brown struggled mightily to defend the paint, and each had two fouls by the 11:27 mark in the first half.

Pitt’s foul trouble in the frontcourt, however, was a blessing in disguise.

Capel, forced to reach into his bench, put first-year forward Karim Coulibaly into the game. He checked in with 11:11 left to go in the first half, and Carey did not score a single basket until the 3:06 mark. The Mali native showed tremendous poise and fearlessness after being thrown into the fire, looking like he belonged on the floor despite playing little this season.

Though Coulibaly and the Panthers finally started to stifle Carey, Duke’s supporting cast rose to the occasion as Capel’s plan began to backfire.

Goldwire and Jones drilled back-to-back threes to put Duke up 30-21 with 5:13 left in the first. And though Pitt generated solid offense of its own, the Blue Devils were operating at an unmatched pace and entered halftime with a 45-34 lead. Sophomore forward Au’Diese Toney had an electric and-one alley-oop dunk down the stretch, but Duke looked poised to blow the game open.

Pitt switched to a matchup zone defense to start the second half, but to no avail — the Blue Devils continued to knock down shots at will. Their lead stretched to 18 with 13:42 to play. Yet in a time where the Panthers could have cracked, they clawed back, and the effort was led by Pitt’s best player all night — Toney.

What had been a solid game quickly turned into a breakout performance. The sophomore had several eye-popping, momentum-shifting dunks, along with several more aggressive takes to the rack. Toney’s 3-point shooting is an area that has drawn scrutiny throughout his career, and he even hit three triples in four attempts. He has been praised for his lockdown defense, but his offense was the focus against Duke. Toney finished with a career-high 27 points on 11-19 shooting.

There was also more to Pitt’s offensive success than Toney’s huge night. Schematically, Capel aimed to take away Carey’s shot-blocking ability by having his bigs set high screens. This forced Carey to come to the perimeter, opening the paint for penetration and cuts. The following shows a textbook example — Coulibaly forces Carey out, which opens up the paint for a Toney backdoor cut, and the bounce pass is perfectly delivered for the dunk.

Coulibaly also flashed an offensive savvy beyond his years. He showed no hesitation in taking the ball right at Carey, making him look downright silly with a spin move, shot-fake and step-through combination reminiscent of Hakeem Olajuwon’s patented “Dream Shake.” Coulibaly finished with eight points and four rebounds, but more importantly made a strong case that he deserves a larger role in Pitt’s often lifeless frontcourt.

With all of the positives, one might ask what doomed Pitt at Cameron Indoor Stadium. The answers are clear-cut — poor guard play and defensive rebounding.

Pitt’s two regular stars, sophomore guards Xavier Johnson and Trey McGowens, were largely absent, combining for just 11 points on 3-17 shooting. McGowens finished 0-7 with just two points. Though the duo facilitated fairly well, combining for nine assists to five turnovers, they simply did not step up in crunch time. McGowens forced several bad shots, while Johnson seemed tentative and rarely looked to score himself. The Panthers’ lack of guard play explains why they scored just two points in the final 4:27.

For the Blue Devils, relentlessness on the glass was the key. The undersized Panthers had no scheme to match the sheer physical dominance of Carey, who finished the night with 26 points and 13 rebounds, five of which were offensive. Duke finished with 13 offensive rebounds as a team. If Pitt had limited these second opportunities, the outcome could have been vastly different.

Moving forward, Pitt will look for its key players to show up on a consistent basis. Toney and Champagnie have proven to be Pitt’s two most reliable pieces, but the absence of Johnson and McGowens is simply not conducive to winning. Coulibaly will look to be rewarded with more minutes for his promising performance.

At the end of the day, Pitt played a road game against the best team in the ACC, overcame adversity and had a chance to win. Capel made it clear postgame that he doesn’t believe in moral victories, but fans can still appreciate the inspired performance from such a young team. Losses are never good, but Pitt can build on this one.