What are the Odds: Super Bowl LIV 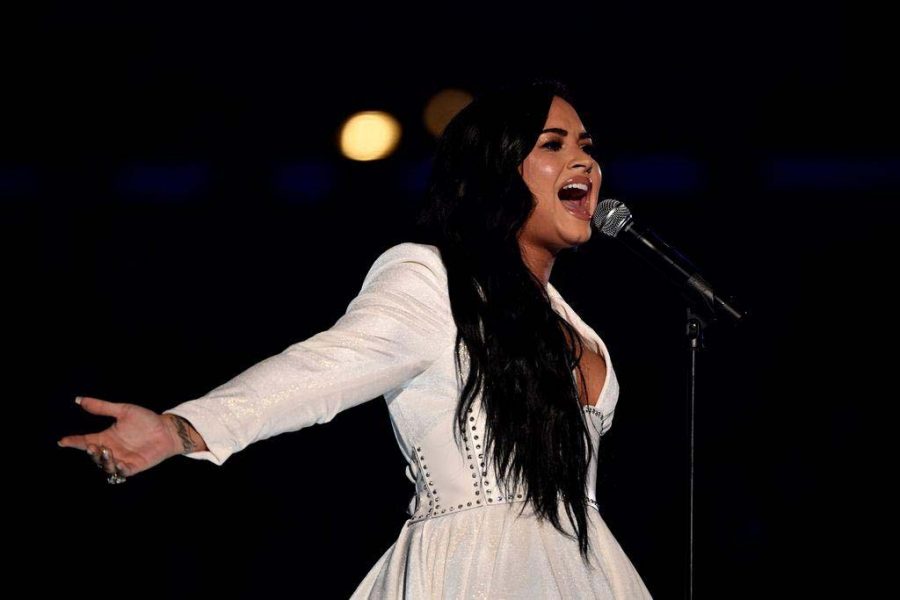 A visibly moved Demi Lovato belts "Anyone" at the Grammy Awards on Jan. 26 after choking up initially. Bets are being placed on whether Lovato’s rendition of the national anthem will be longer than two minutes.

Only a couple events per year bring people together to sit down in front of their TVs for a couple hours. The Super Bowl is one of those events — there’s something for everyone.

For the die-hard football fans, it’s the enjoyment of watching the NFL’s top two teams face off. For non-sports fans, it’s the advertisements and halftime show. And for gamblers, it’s the chance to make some of the oddest and most interesting prop bets an event can offer. That’s where I come in — below is a breakdown of the most fun bets to make for Super Bowl Sunday if you’re feeling lucky.

Never bet before? Here are a few quick definitions. The spread is a figure that oddsmakers set that predicts how much a team is expected to win or lose. The over/under is a prediction of the final combined score of both teams. The money line is the odds for a game based on $1.00. A “minus” (-) preceding the number indicates the option is a favorite. A “plus” (+) preceding the number indicates the option is an underdog.

Analysis: Last year I was one of the many who bet that the Patriots-Rams Super Bowl would go over the predicted 56-point total. It fell drastically short, with a final score of 13-3. This year’s matchup consists of two very different football ideologies, making the over/under again very difficult.

Led by reigning MVP quarterback Patrick Mahomes, Kansas City has a dynamic offense that can put up copious amounts of points in a hurry. The conservative 49ers, on the other hand, can also light up the scoreboard, but they do it methodically by running the ball and controlling time of possession.

I guess I didn’t learn my lesson last year, because I’m taking the over again. I trust Mahomes’ ability to put up points and expect the 49ers to have their way with Kansas City’s mediocre defense.

The close 1.5-point spread in favor of Kansas City essentially makes this game a coin flip. San Francisco has been the most consistent team throughout the year, but can you see its defense stopping Mahomes and speedy wideout Tyreek Hill? I think not, so I’m taking the Chiefs to cover.

Oh, and speaking of coin flips.

Analysis: While the rest of the gambling community blindly follows the “Tails never fails” mantra, stand out from the crowd and take heads. Your chances at winning are good — I’d say around 50/50.

Under two minutes one second +135

Analysis: One of the most intense gambling moments in every Super Bowl is looking at the seconds on your stopwatch to see how long the national anthem goes. This year, we have data on Lovato’s previous anthem times.

In four big-time performances — three World Series games and the McGregor vs. Mayweather boxing match — Lovato’s average time was 1:57, giving credence to taking the under on this bet.

But this is the Super Bowl, baby. All of America is watching, and you can bet Lovato — never one to shy away from a chance to exhibit her pristine pipes — is going to hold those notes for a long time. I’m taking over two minutes one second.

Will a fan run on the field?

Analysis: The favorable odds for “Yes” make this a tempting bet. But security is tighter than ever at the Super Bowl, so it’s not worth it to run on the field. Don’t waste your money on such a long shot.

Which Jennifer Lopez song will be performed first?

Analysis: To be frank, I don’t know many Jennifer Lopez songs. But I believe J-Lo will want to start with something fast and lively, and there’s no better way than with “Live it Up.”

Will Tom Brady be mentioned?

Analysis: “Yes” is a no-brainer here. 49ers quarterback Jimmy Garoppolo played for the Patriots as Brady’s backup for four seasons, and Brady has been to four of the past five Super Bowls. It’s safe to expect multiple Brady mentions during the telecast.

Will there be a flea-flicker attempted in the game?

Analysis: San Francisco offensive coordinator Kyle Shanahan likes to think outside the box. In the final game this season, there’s no reason to hold any tricks back. I think we’ll see a flea-flicker from the 49ers.

Analysis: Yellow may give the lowest payout, but it’s my pick every year. The science behind that decision? It’s my favorite Gatorade.

Analysis: I have the Chiefs winning, which would imply a huge game from Mahomes. If that happens, there’s no way he doesn’t win MVP. I’m taking the easy favorite here.