Panthers falter in second half vs. FSU, lose 66-41 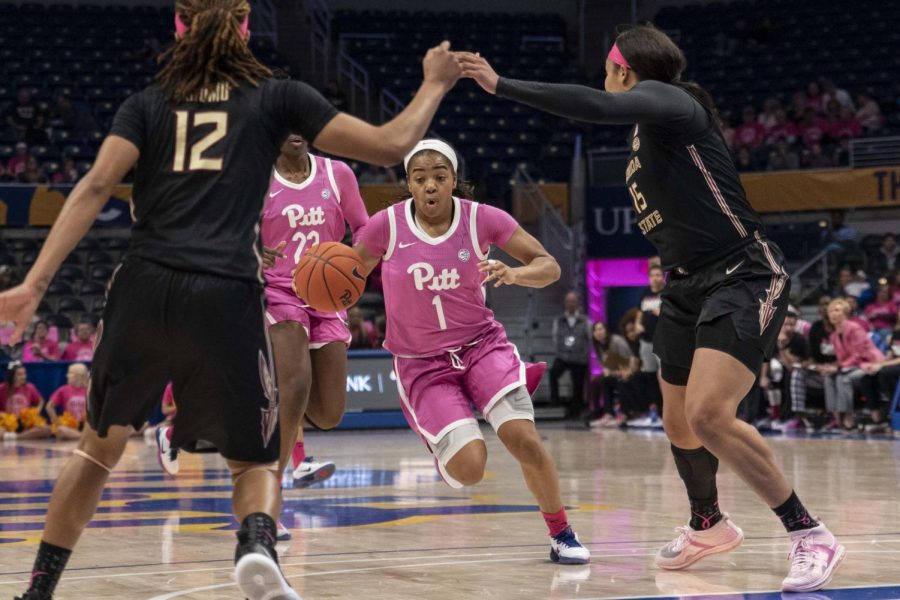 First-year guard Dayshanette Harris finished with a team-high 17 points in the game.

In a lopsided matchup against No. 14 Florida State in the 13th annual Pink the Pete game, Pitt women’s basketball played close for most of the game, but were unable to sustain solid play, eventually being blown out, 66-41.

The loss for the Panthers (4-17 overall, 1-9 ACC) prevents them from getting back-to-back ACC wins for the first time since the 2016-17 season and keeps them in last place in the conference. The Seminoles (18-4 overall, 7-4 ACC) outscored the Panthers 46-21 in the second half and handed head coach Lance White his second straight loss against his former team.

White said he was pleased to see his team play so well for so long and that they’re headed in the right direction, but consistency is the key to stacking wins.

“I was really pleased with our resiliency again and just how we started so poorly on the offensive end but our defense was great for a long time,” White said. “I thought our kids held to the game plan and then they made a run and we just couldn’t sustain it … we just made a few too many mistakes in that third quarter.”

The first quarter started off horribly for Pitt, as Florida State went on a 9-0 run, forcing head coach Lance White to take a timeout with just 6:40 remaining.

It looked like Pitt would start to find some rhythm after first-year guard Dayshanette Harris made a layup right out of the timeout. Instead, Pitt missed every shot and were scoreless the rest of the quarter.

Senior guard Nicki Ekhomu outscored the Panthers, who posted their lowest scoring quarter in almost a year, 9-2 in the opening period.

Pitt came back to make it a close game early in the second quarter, forcing 13 straight FSU misses and going on an 8-0 run, thanks to two 3-pointers from Harris and a shot in the paint from first-year forward Rita Igbokwe.

The rest of the second quarter was a struggle offensively for both teams. Pitt improved, but still shot a lowly 6-19 in the second quarter, while FSU shot an atrocious 2-16, using four free throws to keep the offense afloat.

Both teams ended the second quarter deadlocked after a 3-pointer from Panthers’ junior center Marcella Lamark with five seconds remaining tied the game at 20.

Midway through the second quarter, the Panthers were left without one of their best players when redshirt senior guard Aysia Bugg suffered an apparent right leg injury, which kept her out for the rest of the game.

White said postgame that he hopes it’s just a bruise but could not confirm how bad the injury was. With Bugg out, the Panthers only had eight players from their usual rotation.


FSU completely changed after being unable to separate from Pitt for much of the game. They spread the floor more, took advantage of Pitt’s lack of depth and finally started to get some shots to fall that weren’t going in during the first half.

To close out the third quarter, the Seminoles went on a 16-4 run and lead by 12, putting the game out of reach for this young and inexperienced Panthers’ team.

As a team, FSU shot an effective 8-16 from the field and finally converted from behind the arc, making four of their seven 3-point attempts. Pitt would only shoot 3-10 from the field, with Harris scoring nine of the 11 points in the quarter and finishing with a team high 17 points in the game.
FSU continued their dominance in the fourth quarter, out scoring Pitt 23-10 and going on a 15-0 run as well. They also shot 10-19 from the field and 3-7 from 3-point range, while Pitt got all their points from junior guard Gabbie Green, who made two 3-pointers and shot 4-6 from the field overall.

Towards the end of the game, the Panthers looked exhausted and couldn’t replicate their stellar defensive effort in the second quarter, leading to easy baskets for the Seminoles. It also didn’t help that first-year guard Emy Hayford fouled out early in the fourth quarter, bringing the Panthers down to only seven players.

Green later said the Seminoles defense stopped the Panthers from really getting anything offensively most of the game, as they shot 24.6% for the game, and spoke about why that made it hard for them to come back when they were down.

“They’re very aggressive and athletic,” Green said. “I think they did a really good job of attacking and keeping us going and we tried to move around the perimeter with [Ekhomu]. We think they adjusted well.”

Pitt will finish off its three game home stand with a game next Thursday against Georgia Tech, in hopes of getting back on track and out of the ACC cellar.