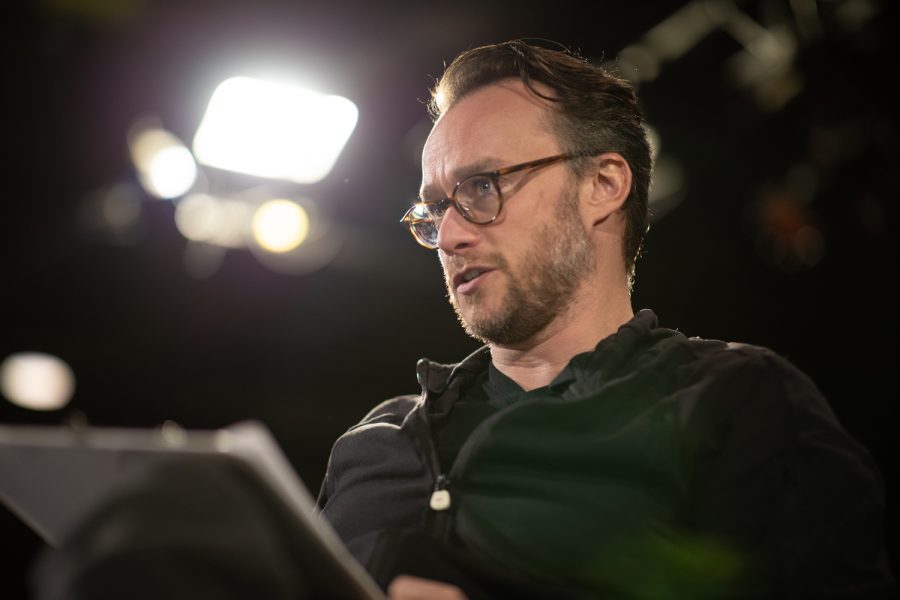 Director Sean Cook’s production of “Oblivion” will open Feb. 5 and run until Feb. 9 in the Henry Heymann Theater.

By Ananya Pathapadu, For The Pitt News

The lights move to focus on Julie as she recites a Bible verse. After hearing her own daughter announce that she loves Jesus, Julie’s mother angrily turns to her and yells, telling her she is grounded for bringing religion into their secular home.

This clash between religious tolerance and intolerance in a household is what director Sean Cook said he hopes to address in Pitt’s production of playwright Carly Mensch’s “Oblivion.” The show opens Feb. 5 and runs until Feb. 9 in the Henry Heymann Theater. Cook said he found the dichotomy to be particularly relevant within what he describes as a divided country.

“I think that’s a conversation that is going on throughout the country in different ways both with religion and race and culture. And I think Carly’s work speaks to that conversation eloquently and in a way that works for university-aged students so that they can engage in that conversation in a creative way,” Cook said.

“Oblivion” tells the story of Julie, a teenager at the end of her high school career, who grows up in a secular household. Julie starts to feel lost, and then finds Christiantity and decides to become Christian. Samantha Rose, a sophomore theater arts and communications double major who plays Julie, said her character’s journey to embracing Christianity and how this decision affects the relationship with her family is detailed onstage.

“Throughout the course of this show, you see her becoming more and more enthralled with religion, the idea of Christianity and this causes a stir with her family because her parents are super secular and they don’t necessarily believe in any higher being,” Rose said.

Rose said Julie’s difficult journey, the support of her best friend Bernard and a divided family all contribute to what she describes as a story audiences don’t necessarily hear much about.

“It’s just a family going through some problems and you see all the problems play out onstage and I think it really reflects, in at least some sense, problems that every family will go through some time or another,” Rose said.

This show is Pitt’s third LAB production this year, part of a program in which undergraduate students have the opportunity to work with MFA performance pedagogy candidates. According to the department website, the MFA in performance pedagogy is a program that allows professional actors to teach at the university level. Cook said the high expectations set by graduate students are met and exceeded by the undergrads.

“One of the great things about the LAB productions here at the University of Pittsburgh is that the MFA performance pedagogy candidates, like myself, as well as the Ph.D. graduate students get a chance to mentor the undergraduates,” Cook said. “It requires a different level of commitment out of the students and they all always rise to the occasion.”

“This production is really fun because I am getting to work with Sean, who is one of our MFA students. He is spectacular to work with,” she said. “This is the first time I’ve ever worked with him, and I feel like I’m learning a lot because I’m just in the room, watching a professional actor teach young actors.”

Cook said one aspect of Pitt’s production of “Oblivion” that varies from not only other productions of this show, but from most stage productions, is the use of intimacy choreography. Intimacy choreographers help the cast use safe practices for scenes that involve physical touch, such as scenes with familial intimacy or sexual tension.

Although intimacy choreography is a relatively new practice in both theater and film, Cook said he hopes that it becomes a more common practice for stage actors and takes pride in the fact that Pitt is taking strides to safely execute such physically demanding work. Cook said he felt the story would be better told with the help of intimacy choreography and had the cast trained for this practice.

Audiences will get to see how these intimacy practices were used in the show and how Julie’s struggle between religious beliefs and her family’s beliefs will play out starting Feb. 5. In a time where it is easy to divide people by religious and philosophical ideologies, Yelovich said she hopes the audience sees a different perspective and that people think differently about their approach to religion.

“I hope it brings you closer to your family, because that’s what the show is about — family coming apart and then coming back together in the end,” she said.