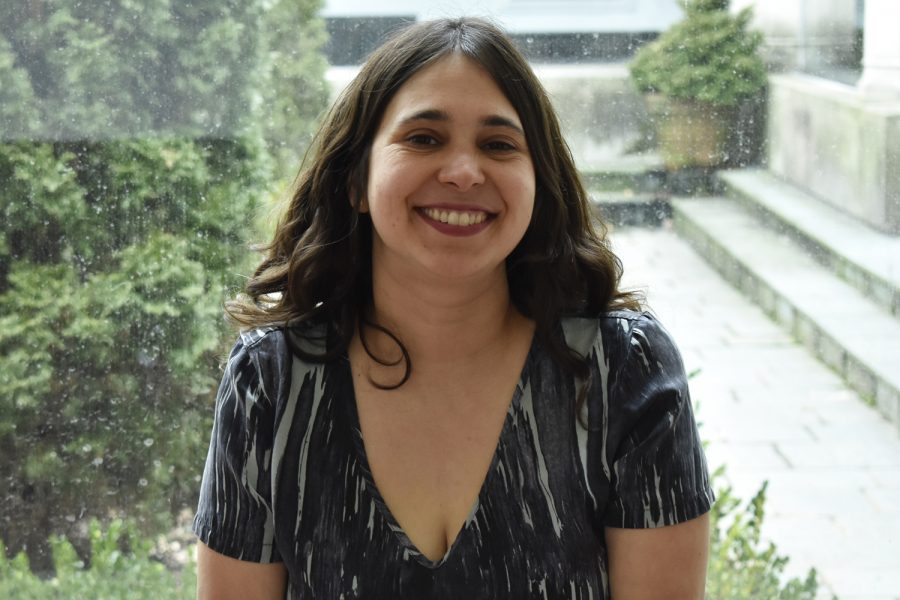 Anjali Sachdeva, lecturer in the English Department, received a $25,000 creative writing fellowship from the National Endowment for the Arts.

Creating a follow-up to an Ivy League undergraduate education, an MFA from one of the best programs in the country and a breakout first story collection might seem like an insurmountable task — but not for Anjali Sachdeva.

Sachdeva, a lecturer in the English Department, received a $25,000 creative writing fellowship from the National Endowment for the Arts (NEA), the organization announced Jan. 16. According to the press release, Sachdeva’s application, as well as 35 others, were chosen from more than 1,600 applications. Sachdeva said her reaction to receiving the grant was a welcome break from the throes of academic work.

“I was very, very excited. I was grading a huge stack of papers when they called me so I was not, maybe, in the happiest frame of mind and it was a great surprise,” she said.

The NEA awards 36 creative writing fellowships annually, with the grants alternating every year between poets and prose writers. An additional 24 fellowships of $12,500 are awarded for literature translation. Sachdeva plans on using her fellowship to create more time in her schedule to write.

“Part of what is so exciting about this is I feel like it gives me a chance to build on [the success of her first book], in particular to finish my next book in a reasonable amount of time rather than trying to write it a few months at a time over summer break,” she said. “I also have two small kids and I teach full-time so it’s a lot going on, and the writing is always stuck into the little spaces in between.”

Though she is planning on using the fellowship to devote more time to the successor of her 2018 short story collection, “All the Names they Used for God,” Sachdeva’s first published work drew no small amount of praise in the literary community.

“Her literary world is magnetic. The author has created perfect, complete micro-universes that lure the reader into the dark depths of literature like siren song,” the Los Angeles Review of Books review of the title, written by Michael Valinsky, reads.

Sachdeva said she isn’t sure yet whether she is writing a novel or a second collection of stories for her next book, but said she is excited to see where the work goes with the help of the NEA.

“It’s definitely going to be fiction. Right now it’s sort of halfway between being a linked story collection and a novel and I’m working to see where I’m going to take it,” she said.

Peter Trachtenberg, associate professor and head of Pitt’s writing program, has known Sachdeva since before her appointment at Pitt. Trachtenberg said that in the time he’s known Sachdeva, he’s been impressed by her work both in and out of the classroom.

“Well, she’s a very good, dependable and inventive teacher. She incorporates media into her teaching which is something we’ve been trying to push for a while,” he said. “She’s a working writer and a phenomenal writer, so she communicates that ethos to her students.”

In her teaching, Sachdeva said that her background as a journalist informs the way she approaches not only writing her fiction but in instructing her students as well. She said she encourages students to think outside the room they write in and experience the world.

“You may need to sit in the room and write, but you should be getting out there and looking at things and talking to people because that experience is going to inform your writing and make it richer and I really do try to bring that into what I do with fiction,” she said.

Sachdeva finds that, while scientific research is funded more often than creative research, that artists also use the money for supplies, and often for travel and living expenses so they can enrich their work. She said that many writers use funding opportunities such as NEA grants to give themselves time to focus on their craft, just as she plans to.

“I know a lot of writers who use the money to do research into their projects. So, they might need to travel somewhere, to access some archives or to experience something in person,” she said. “There are other ways that creative artists spend the money but I think a lot of writers use it primarily to just give themselves time to write.”

Trachtenberg similarly said he experienced the importance of funding creative work after receiving a Whiting Foundation Award in 2007, which allowed him to finish his work and continue to support himself with his writing.

“I was broke, I was working on a book that I had long ago spent my advance for, I was told that I had to have all my upper teeth pulled and I had no idea how I was going to pay for it,” he said. “I got a Whiting Foundation award literally the next day, and it made the whole difference. I was able to finish the book and I was able to get the dental work.”

The community of the English writing program at Pitt holds strong — the same love for Sachdeva’s work expressed by Trachtenberg is felt by Sachdeva about being a member of the department, where she says she’s found camaraderie surrounded by colleagues doing all sorts of different creative work, from poetry to creative nonfiction.

“It’s great, it’s a really great department. People are working on such a range of different types of work,” she said. “They’re all carving out these very different areas of writing but that’s what makes it exciting, and it is a very supportive group of people so I’m appreciative of that.”

Trachtenberg finds that funding opportunities for himself and his colleagues open up opportunities for more experimental work as traditional publishing houses have been increasingly less willing to take risks.

“What an NEA or a Whiting or a Guggenheim [fellowship] does is allow writers to do the unexpected thing and to work where their muse is calling them,” he said.