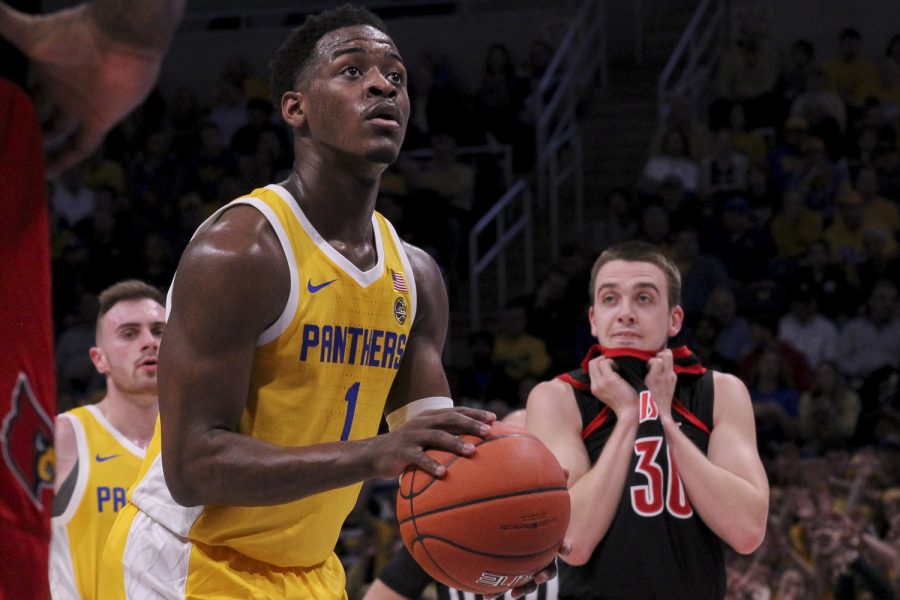 Sophomore Xavier Johnson (1) during Pitt’s 73-68 loss to Louisville in January.

Pitt basketball is on the rise. There’s no denying that.

Less than two years ago, a Kevin Stallings-led Pitt team finished the season 8-24, going winless in its 19 ACC matchups. In head coach Jeff Capel’s inaugural season, despite three key players transferring, the Panthers showed signs of life through Capel’s first freshman class. The team went 14-19, 3-15 in the conference, with a few marquees’ wins and an additional postseason victory in the ACC tournament.

No matter how this season ends for the Panthers, it will be considered a success in the grand scheme of rebuilding a program from rock bottom. With a 14-8 overall record and 5-6 in the ACC, the Panthers seem to be destined for an NIT appearance at worst. These next couple of weeks, however, give Pitt a chance to take its program to an even higher level — the NCAA Tournament.

Though the Panthers’ record hasn’t earned them a lot of attention in these conversations yet, they have remained above water during the most dangerous segment of their schedule.

In a particularly subpar year for the conference, three teams — Louisville, Duke and Florida State — have emerged as leaders of the pack, with a huge gap between them and the other 12 squads. Pitt has already completed four of its five matchups against these opponents, leaving the rest of its schedule ripe with potential.

Before their Feb. 18 rematch with No. 8 Florida State, the Panthers play four similarly skilled ACC teams: Notre Dame (4-6 ACC), Georgia Tech (5-7 ACC), Clemson (5-6 ACC) and Virginia Tech (5-7 ACC). This stretch presents an opportunity for the Panthers to rise above the pit of mediocrity that so many teams in the conference have fallen into this year.

If there’s one thing Pitt has taught us this season, it’s that a win is a win. Over and over again the Panthers have barely scraped by some weak opponents, but those close calls have helped Pitt’s record stay afloat nonetheless.

In Sunday’s home game against the Miami Hurricanes, who are now tied for last in the ACC at 3-8, the Panthers were gifted a chance for an easy win with two of the Hurricanes’ three leading scorers out with injuries. Instead, it took some late-game heroics and strong defensive stands for Pitt to escape with a five-point victory. Regardless, the Panthers can appreciate the streak column reading W1.

A nail-biter against Boston College a few weeks ago gave Pitt its first two-game conference win streak in nearly three years. A road bout against Notre Dame this Wednesday could allow them to do it again.

The Fighting Irish have more talent than their record suggests. They have a go-to senior star in forward John Mooney, a dark-horse candidate for ACC player of the year. Their primary ball-handler, sophomore guard Prentiss Hubb, creates points for himself and his teammates without turning the ball over.

Notre Dame’s weakness has been its mediocre defense, which allows more than 68 points per game. The Fighting Irish have repeatedly been torched from deep this year, as their 3-point percentage allowed (34.2) ranks last in the ACC. It is vital that Pitt, a team that has struggled all season behind the arc, can convert its clean looks.

The Panthers will need to do something they did perfectly in their win over the Hurricanes — rebound the basketball. Pitt outrebounded Miami 40-31, racking up 17 offensive rebounds to Miami’s seven. Sophomore guard Au’Diese Toney and first-year forward Justin Champagnie had 10 and 9 rebounds each, respectively.

“I thought we dominated the glass, especially on the offensive end,” Capel said after the Miami win. “We felt coming into this game that that was something we could exploit. Our guys did a good job of doing that.”

Pitt’s main challenge will be keeping Mooney, the ACC’s leading rebounder, off of the boards. Mooney, averaging a team-high 16.5 points and 13.2 rebounds per game, will make the Panthers pay if they cannot put a body on him.

If the Panthers can rebound, make open shots and slow down a streaky Notre Dame offense, they will leave South Bend, Illinois, with an impressive victory. If they can string together three or four in a row, the NCAA Tournament selection committee will have no choice but to add the Panthers to its considerations.