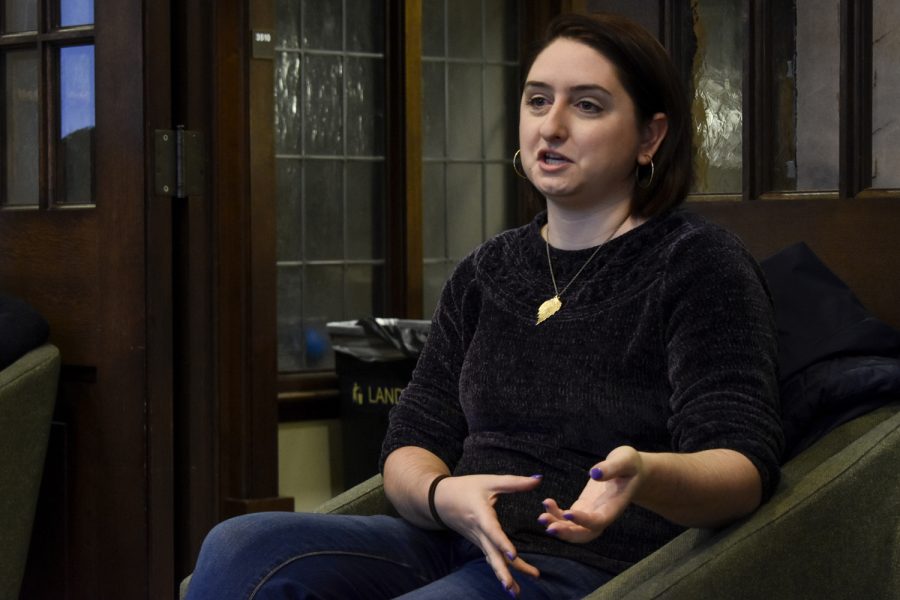 Sarah DeMaria was starting life as a high school social studies teacher in Houston with her husband when she was surprised by an email from Pitt, her alma mater, offering her the Urban Special Education Scholars Grant.

“I immediately replied, ‘Sorry, I have a house in Houston with my husband,’” she said. “‘I don’t know that there’s anyway I could do this.’”

The grant would allow her to study special education in urban areas to help improve the education system for those with special needs. After initially turning it down, the person who would become her current Ph.D. adviser helped her to realize she had to seize the opportunity in front of her, so she headed back to Pitt.

DeMaria was the special guest at the Honors College’s bi-weekly Alumni Breakfast series. The event — which about a dozen people attended — took place on Tuesday morning in the Cathedral of Learning.

DeMaria is currently in the second year of study for her Ph.D. in Special Education and Urban Education. This was not her first time at Pitt — she completed both her bachelor’s and master’s degrees at the University. She graduated from the Dietrich School of Arts and Sciences in 2013 with a double major in history and political science and later completed her master’s of education in 2015 with a focus on grade 7-12 special education and social studies.

DeMaria currently studies issues involving inclusion of students with disabilities in Advanced Placement classes, special education teacher retention and different kinds of interventions for students with disabilities. Though she is the most familiar with working with middle and high school students, she said she is interested in opportunities to conduct research involving other age groups.

“I tend to focus on older students,” she said. “But there’s so many opportunities for even kids that are before the preschool age.”

Clare Stich, manager of constituent relations and the coordinator for this event, facilitated the discussion and had DeMaria speak about the research she is conducting in Pittsburgh.

Amongst her five colleagues in this Ph.D. program, DeMaria is participating in two studies that she hopes will bring about a positive change to the special education community. Her first study outlines the idea that general education and special education teachers should work together in the same classroom and teach the same kids, regardless of disabilities — a process called “co-teaching.”

“The idea is that it’s supposed to help inclusion,” she said. “If you are a child in special education, you should not be spending most of your day in a special education class or a separate school.”

She said she hopes this new development of teaching would bring about social and academic benefits for both students with and without disabilities.

The second study she is participating in focuses on helping better the writing education in school districts, hoping to implement a writing intervention for students with disabilities. Within this intervention, her main focus is on writing thesis statements of essays, which she feels is a very helpful and important skill for children to learn.

“My idea behind that is if you can write a really good thesis sentence, that should give you a good framework for the rest of your essay,” she said.

She also highlighted the importance of writing intervention in the entire education system across the country.

“Every district has a need for writing intervention,” she said. “Writing is not a very easy skill for anybody, so there’s always a need for that kind of thing.”

With both studies, DeMaria is structuring it to focus on one of two categories of disabilities seen in students, including high incidence and low incidence.

After teaching in school districts in Pittsburgh, Houston and Baton Rouge, Louisiana, DeMaria was able to get an understanding of different school climates that have influenced her research.

“Every school has its own different feel to it,” she said.

Among the student attendees at the discussion was Bethany Krupicka, a junior urban studies major, who asked questions regarding how home and social situations influence DeMaria’s research, how that is controlled throughout the project and how disabilities affect situations like this.

In response, DeMaria talked about the social nature of education and how that limits how much control she has over her research.

“Education is a social science, not a hard science,” she said. “So you can’t necessarily control everything like in a perfect laboratory setting.”

DeMaria highlighted how changes can be made to keep the research as controlled as possible, like implementing an outside observer to assist in making sure everything done in the project — such as grading techniques — remains static throughout the entire time.

After the event, Krupicka said she enjoyed the discussion with DeMaria and was fascinated by her research and studies.

“I really enjoyed Sarah’s talk this morning, especially as she shared how she got from studying history and poli sci in undergrad to pursuing a Ph.D. in urban & special education,” she said. “Hearing people’s unconventional paths to where they presently are is super interesting and encouraging for me.”

DeMaria said she is excited about her further research and emphasized how, even if the research doesn’t offer definitive solutions, the endgame of her research can still provide knowledge into what works and doesn’t work in the educational system.

“A cool part of research is it’s great to know what doesn’t work,” she said. “Moving forward, there’s knowledge about what you do in the future to try something new.”