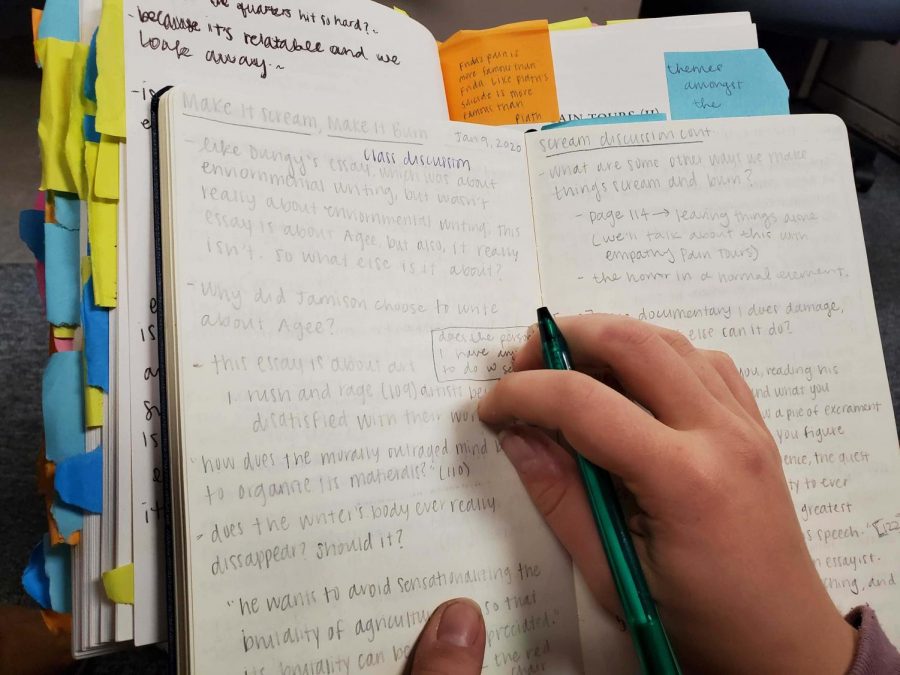 Opinions Editor Leah Mensch is passionate about writing and plans to get a master’s of fine arts in creative writing.

Once I told someone I wanted to get a master’s of fine arts in creative writing and they told me it was the second-to-worst post-graduation plan they’d ever heard from a student. I didn’t ask what the first was, but I can only imagine.

Arts degrees — especially fine arts degrees, which usually come in the form of music, studio art, creative writing and theater — have been, over the years, labeled useless. Search “useless degrees” on the internet and you’ll find, on just about every homemade ranking, that it’s quite literally just a list of liberal and fine arts degrees.

But I think the word “useless” is a lazy use of language. Everyone’s idea of what useless means is different, and regardless, it’s not possible to define whether or not a degree is “useful” based upon the number of jobs available and the number of people employed directly in the field. People have different life paths and different ways of using a degree. But this doesn’t make it useless.

It’s true that for the most part, STEM degrees lead to higher paying jobs than liberal and fine arts degrees, and it’s understandable why young people care about a higher starting salary and financial security. Student loan debt is playing a role in the physical and mental stress of young people — the debt, which, as of 2019, averages at about $31,000 total, and $400 in monthly payment per college graduate. In 1980, for reference, the average debt per graduating student was $9,320. But each year, the average debt increases at a higher rate. In 2010, the average debt was almost $10,000 less than it is now — $29,900.

And while STEM majors usually have starting salaries that are $20,000 higher than those of liberal arts majors, by the time people reach the age of 40, the salaries between those who majored in the liberal arts and those who majored in STEM are virtually the same. For example, women who are applied STEM majors earned nearly 50% more than social science and history majors at ages 23-25, but only 10% more by ages 38-40, a New York Times analysis reported. So even in terms of salary, which doesn’t solely determine whether or not a degree is useful, liberal arts degrees aren’t all that far behind STEM.

It seems too that since we’re going to have to work longer than the generation preceding us, it’s more important than ever that we actually like and care about what we’re doing. The retirement age in the United States is steadily rising, the age in which the U.S. government allows retirees to receive full social security benefits has risen from 65 to 67. This is all to say that we’re going to be in our career fields for a very long time, and pursuing something enjoyable, or else a passion, is continuously found to be a key factor in maintaining healthy relationships, mental health, physical health and energy. In other words, not useless.

And just because someone’s primary job isn’t in their field of study — a writer who teaches high school for example, or a playwright who primarily does work editing — doesn’t render the degree useless. It just means that their way of finding a stable income is different. The same goes for artists who have to work multiple jobs to support themselves.

This isn’t to say that going to art school is going to provide the same financial stability that an engineering degree will. But this is to say that just because art doesn’t provide the same financial stability doesn’t mean that a degree in art is useless. It just means that the artist might have to find other means of supporting themself and their artistry. It might be copy editing or it might be tutoring. It might be serving food at a restaurant, working retail or bartending.

Art is a method of communication. It allows people from different backgrounds, from different walks of life to communicate with each other. In a world where borders and division seem to be all over the place, we need art more than ever. We need liberal arts majors. And more than anything, we need to be able to pursue what we love with confidence, and we need to not get caught up in the “usefulness” of what we love.

The only kind of useless degree is a degree earned that has no impact on the graduate who earned it. Which is to say, the graduate doesn’t think of their art or work, and it doesn’t influence their life in any way, shape or form. And that’s rare, especially if the degree earner is passionate about their subject, which, in terms of art, is often the case.

Leah writes primarily about mental health, books, writing and the spices of the world for The Pitt News. Write to Leah at [email protected]