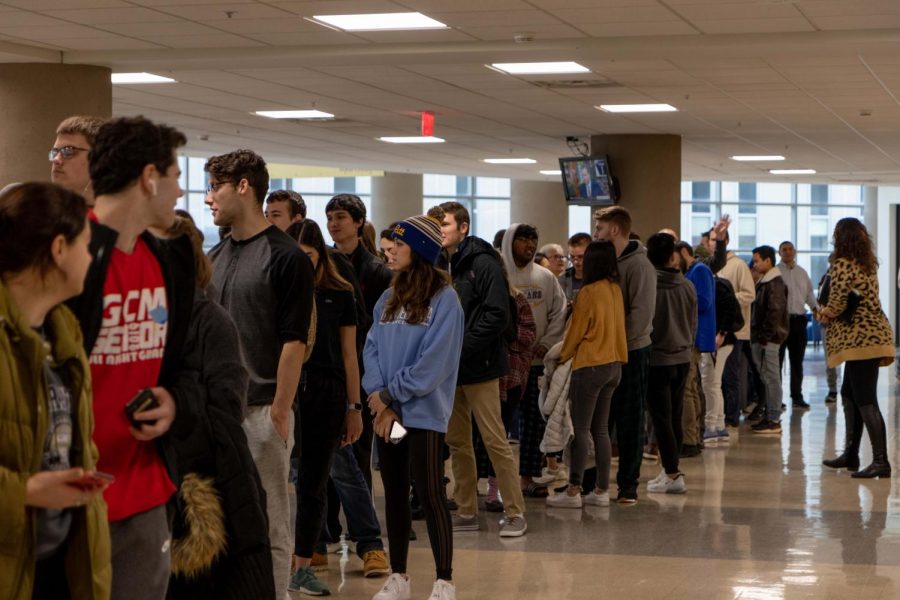 Students await the opening of the newly reopened Chick-fil-A.

The 71A bus comes every 10 minutes. The 75 comes through Pitt about every 13 minutes — and thank God, because it drops us right in front of Trader Joe’s. Leap Year comes every four years, and a new moon cycle starts every 29.5 days. We all know that The Pitt News is going to produce content every weekday — you’re welcome. While it’s great to know the rate at which a full moon is coming, we want to know where the hell the Iowa Caucus results are, because it’s been four days, and even now, seeing that they’re almost fully reported, a New York Times analysis found that the results are “riddled with inconsistencies.” So, in the meantime, these are the top 10 things that are going to arrive faster than the caucus results.

Getting to the front of the Chick-fil-A line

Walking to class after your 21st birthday

If it happens at all, it’s a miracle.

A wise person once said that if they had but a day to live, they would go to a physics class, because physics classes never end. Actually, though, this wise person should consider waiting for the Iowa Caucus results.

We don’t remember when campus construction started — in fact, we’re not sure that it ever started, or if it’s been around as long as Mother Earth herself — and we’re not sure it will ever end. So it goes.

If you think the wait for the Cathy elevators is bad, then you’re absolutely right. But sometimes — for no apparent reason — the line for the WPU elevator snakes through the lobby. And then, the elevator arrives from the ground floor, and it’s already packed full of people, and you have to wait for the next one. Sometimes us editors have to take … the stairs.

Most of us have never actually gotten the Market grilled chicken. We just wait in line for three minutes, give up and eat rice and green beans instead.

Those papers from the procrastinating professor

Do you ever hand a paper in to a teacher and think you’ll probably have it graded and returned in four days? And then you get it back three days before the end of the semester, when it’s no longer relevant? That’s probably how the Iowa Caucus goers feel right now.

We’ve been experiencing a bit of a dry spell since like … 1976. But it has to end at some point. Maybe.

Yes, the Student Government Board elections are February 25.

Yes, we might sooner know those results than the Iowa Caucus results.

Deval Patrick is some random guy on the Iowa poll list when you Google Iowa Caucus results, which we have all been doing by the hour for the past four days. With 96% of precincts reporting, Deval has 0% of the vote, but he’s still listed above John Delaney, Mike Bloomberg, Tulsi Gabbard and Michael Bennet. Nobody has heard of this man, and all we want to know is, who the hell is Deval? We might find out who he is sooner than we find out who won the state of Iowa. But also, we’d have to care enough to look him up.