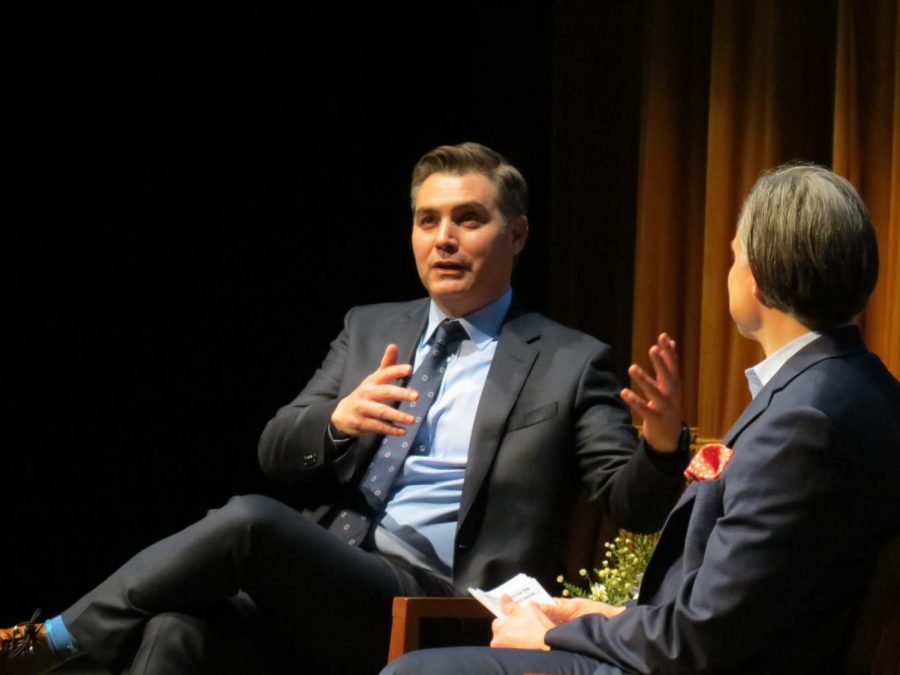 Jim Acosta, CNN’s chief White House correspondent, visited Point Park University’s Pittsburgh Playhouse and discussed his new book “The Enemy of the People: A Dangerous Time to Tell the Truth in America,” as well as his experiences in the White House.

Jim Acosta, CNN’s chief White House correspondent, is no stranger to criticism, even in Pittsburgh.

When discussing his new book “The Enemy of the People: A Dangerous Time to Tell the Truth in America,” at Point Park University’s Pittsburgh Playhouse on Thursday night, Acosta faced cries of “InfoWars,” “fake news” and “hateful” from members of the audience. The book chronicles Acosta’s personal experiences and dangers reporting in Trump’s White House.

Acosta, who said he is escorted by security guards at political events, had strong judgements for these criticisms.

Acosta joined CNN in March 2007 as a national political correspondent and lead correspondent for Mitt Romney’s campaign during the 2012 presidential election. He also reported on the Virginia Tech shooting and Gulf Coast oil spill. As chief White House correspondent, Acosta has covered the presidential press conferences of both the Obama and Trump administrations.

Acosta gained national attention in 2018 after his press credentials were revoked by the White House following a conference where he questioned the president on whether he had “demonized immigrants” by labeling the arrival of Central American migrants “an invasion.” Former White House Press Secretary Sarah Sanders then accused Acosta of “placing his hands” on a White House intern with a doctored video. CNN sued the White House, and Acosta’s press badge was eventually restored.

Acosta said that losing his credentials was “surreal,” and he was instantly concerned with how he was going to continue covering the president.

“That night I went out for dinner, came back to the White House and looked at my phone and there’s an email from Sarah Sanders, but it’s not to me, it’s to the entire world saying my press badge has been taken away,” Acosta said. “I could not enter the grounds of the White House anymore.”

Acosta said this was only the beginning of an administration that has challenged the media, especially with the term “fake news.” Acosta referenced the press conference Thursday afternoon where Trump celebrated the Senate’s vote acquitting him. Trump criticized Senator Mitt Romney, who voted in favor of Trump’s removal, as a “failed presidential candidate” who used “religion as a crutch.” Trump also mentioned Adam Schiff — who he called a “vicious, horrible person” — and Speaker Nancy Pelosi.

“Today was one of those days. He was frustrated with this entire process, and it was sort of a live Twitter feed coming out of his mouth,” Acosta said. “As he was trashing Mitt Romney, he was praising other Republicans in the room and then the Republicans were applauding him just after he trashed Mitt Romney. As one Trump campaign surrogate said to me recently ‘this is not a Republican administration, this is a Trump administration.’”

“I think you got to be critical of Trump, I mean how could you not be critical of this guy?” Rossi said. “Journalists today are under attack. Americans today don’t realize the importance of the free press.”

Acosta said he has noticed considerable differences in the day-to-day lives of journalists during the Trump presidency. He noted that the White House doesn’t host press briefings anymore, meaning more reporting is done behind the scenes by informants Acosta called “patriotic Americans.” He also said he travels to every Trump rally and event with bodyguards, referencing death threats directed at him by Cesar Sayoc, who is currently serving a 20-year prison sentence after sending inoperative pipe bombs to media officials and Democrats in 2018.

“The concern I have is that if you have a situation here in the U.S. where a journalist is seriously injured or killed, we cease being the United States of America that we grew up with,” Acosta said. “When the president gets up there and starts laying into us and accusing us of deliberately misreporting the news, what often happens after the event is over is people come up to us and start screaming ‘traitor.’ There is a cause and effect.”

Allison Hritz, a Point Park University student and member of campus media, said she is impressed by Acosta’s ability to put himself in harm’s way for a story, including facing the screams from the audience.

Despite criticizing Trump, Acosta calls himself an “equal opportunity pain in the butt.” Acosta said he doesn’t vote in the presidential election so as to keep himself a “news monk.”

Taylor Spirito, another Point Park University student, doesn’t agree that Acosta is always equal in his reporting, but that he does try.

“Watching his reporting, I think it’s obvious that, while CNN advertises as a bipartisan station, it’s clearly not,” Spirito said. “I think he’s very passionate about what he does which comes off as non-bipartisanship, but he tries his best.”

No matter what his political leanings are, Acosta said he encourages civility in politics.

“People are absorbing nastiness and mean-spiritedness. It’s so fitting that we’re in the home of Mr. Rogers, because I was taught not to treat people that way. It makes me think that I’m not in America anymore,” Acosta said. “Maybe we can recapture the spirit of Mr. Rogers someday.”