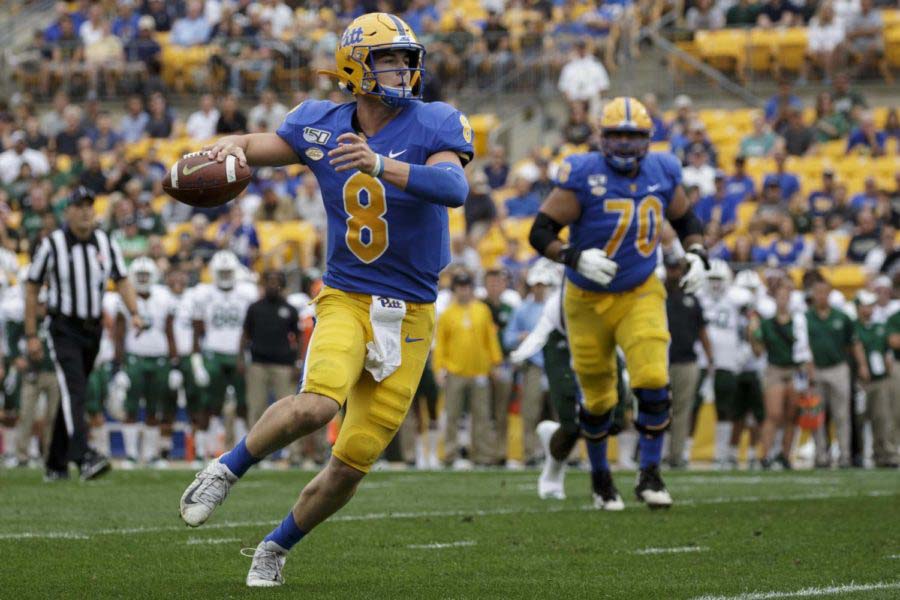 Senior quarterback Kenny Pickett, in his first game back from injury, completed 21 of 27 passes for 210 yards Saturday.

By Dalton Miller and Sam Krimins

With Pitt’s 2020 football roster set in stone after Wednesday’s National Signing Day, it’s time to assess the Panthers’ prospects for the upcoming season. Two of our staff writers break down the hottest takes about the team as it prepares during the offseason.

Pitt football will win nine games in the 2020 regular season.

Dalton Miller: Agree. This team is beyond set to make a run this season. With the defense retaining most of its starters, and with the return of both Rashad Weaver and Keyshon Camp from injury, Pitt should have a top-five defense entering 2020.

The offense should also make a big jump this year, with Kenny Pickett returning for his third year as a starter and second season with Mark Whipple at offensive coordinator. The Panthers are also bringing in a few recruits at wide receiver who could make an immediate impact, and Shocky Jacques-Louis looks poised for a breakout year. If Pitt can find some sort of run game to balance out the offense even a little bit, this team is going to be very dangerous.

The only thing left to consider is the schedule. Pitt finally has a fairly easy non-conference schedule with both Penn State and UCF out, leaving a home game against Notre Dame as the only challenge on the slate.

In terms of conference play, games at North Carolina, Florida State and Miami could be tough, while a home contest against Virginia Tech could also cause problems. But in these five losable games, it seems realistic to think Pitt could win three of them. If the Panthers can do that and take care of business against their lesser foes, that would put them at 10 wins in the regular season, almost guaranteeing a Coastal title.

Sam Krimins: Disagree. Last season’s 8-5 record was certainly a success, which will bring momentum into 2020. The defense will obviously be outstanding, especially with the return of safety Paris Ford, defensive tackle Jaylen Twyman and defensive end Patrick Jones II.

Pitt’s offense, however, will again be its Achilles heel. The Panthers averaged a paltry 21.5 points per game last season, which ranked 114th in the nation out of 130 teams. Their rushing game lacked consistency and explosiveness, finishing 12th out of 14 ACC teams in yards per game.

Opposing defenses will not respect Pitt’s run game, allowing them to focus heavily on the passing attack. With explosive playmaker Maurice Ffrench gone to graduation, Pitt’s passing attack will be even further hampered. In spite of its extremely talented defense, Pitt will fall short of a nine-win season because of its unimproved offense.

Transfer tight end Lucas Krull will be a high-impact player on offense next season.

Dalton Miller: Agree. Krull is physically gifted, listed 6-foot-6 and 250 pounds. Not only is he a hulk of a human, but he’s got great speed for someone his size. In the 40-yard dash, he ran between a 4.5 and a 4.6. That puts him in the same range as elite NFL tight ends like George Kittle and O.J. Howard. With his size and speed he could provide solid run blocking as well.

On top of his pure physical talent, Krull joins an offense that loves to utilize the tight end. Whipple is known for his use of tight ends, which was clear last season as the ball seemed to consistently find Pitt’s tight ends even though they struggled to catch it. If Krull shows he has the hands to hang on to the ball and the ability to get open, there’s no reason he shouldn’t snag at least five catches a game.

Sam Krimins: Agree. Krull is a special talent that will immediately have an impact on the offense next season. The large and athletic Krull gives Pickett a reliable tight end target that he lacked in 2019. With previous tight ends Will Gragg and Nakia Griffin-Stewart graduating, Krull is a much-needed offensive weapon.

Despite his incredible talent, Krull only caught six passes for 75 yards while at the University of Florida during the 2018 season. But as previously mentioned, opportunity won’t be an issue in Whipple’s pass-heavy offensive system. If Krull can demonstrate solid catching ability and route-running, Pitt’s offense will undoubtedly be better off for it.

Running back Israel Abanikanda will be the Panthers’ most productive incoming player.

Dalton Miller: Disagree. Abanikanda will have a significant impact this year, and there’s a chance he could be Pitt’s No. 1 running back before the season is over. But he’ll certainly split time with Vincent Davis, who impressed in 2019. With the chance Abanikanda may be just one piece of a committee backfield, it doesn’t seem likely that he’ll be Pitt’s most productive newcomer.

The most productive incoming player this season will be Krull. As previously stated, he is a physical specimen. And even if Krull doesn’t perform as well as many believe he will, he is still locked in as the No. 1 tight end. This almost guarantees him more snaps than Abanikanda, giving him greater opportunities to contribute to the team.

Sam Krimins: Disagree. Abanikanda will have an impact this year but will be far from Pitt’s most productive incoming player. Krull should run away with that title for all of the above reasons. Plus, Abanikanda is going to share a crowded backfield with Vincent Davis, as well as Todd Sibley Jr. and A.J. Davis.

Class of 2020 receiver Jordan Addison is another candidate for this title. The four-star recruit’s raw athleticism should be immediately felt, as he boasts the sort of speed Pitt will need in the wake of Ffrench’s departure. Krull and Abanikanda should have greater immediate impacts, but Addison is a newcomer to watch this season.