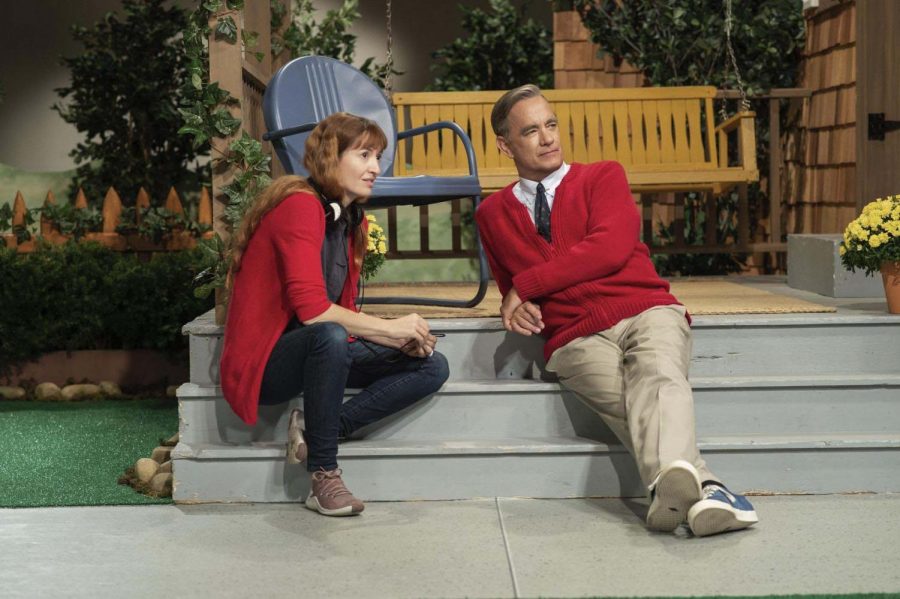 Director Marielle Heller, left, and Tom Hanks on the set of "A Beautiful Day in the Neighborhood."

At some point in the next few years, a woman will probably win the Academy Award for Best Director, right?

It hasn’t happened since 2010, and it didn’t happen last night — no women were nominated in the category; we got to celebrate Bong Joon-ho’s historic win instead — but the ongoing absence of women from the winner’s circle has become enough of a “thing” at this point (“Congratulations to those men,” etc.) that it feels like sometime soon, the Academy will course-correct and rally to reward one of the female directors turning out awards-caliber movies.

Again, that’s just a guess. I like watching movies, but I don’t know that much about them. I’ve paid attention to the Oscars for the past couple of years, but I’ve given up on trying to be a part of the conversation. I didn’t watch “Ford v. Ferrari” or “1917” or “Once Upon a Time in Hollywood” or a bunch of other movies because I just didn’t feel like they were for me, you know?

But if I were nominating the best-directed movies of the past year, there would be at least three women on the list. Lorene Scafaria’s “Hustlers,” simply because it’s the most “hell yeah” movie of the year. And then Greta Gerwig’s “Little Women” and Marielle Heller’s “A Beautiful Day in the Neighborhood.”

These last two movies feel somehow connected to me, although it’s been difficult for me to explain why. One is a fresh adaptation of Louisa May Alcott’s 19th-century novel about four teenage sisters and the other is a not-really-biopic about Fred Rogers’ real-life friendship with a magazine journalist. There isn’t an obvious link beyond the fact that both feature excellent supporting performances from actor Chris Cooper.

But the protagonists of “Little Women” and “A Beautiful Day” — writers Jo March and Lloyd Vogel, respectively — struggle with similar issues of anger, resentment and loneliness. Saoirse Ronan’s Jo, the tomboy who “can’t get over [her] disappointment in being a girl,” is trying to figure out how to be a good daughter and sister to the family she loves when those identities seem inextricably tied to a femininity that’s alien to her. Matthew Rhys’ Vogel carries a bitter, heavy resentment towards his father, Cooper, who abandoned Vogel and his mother while the latter was dying of cancer.

I think Gerwig and Heller, now two of Hollywood’s most prominent female directors, are interrogating similar issues here. These movies ask “What is compelling about masculinity? And how can we fix what’s broken about it?”

Heller has said again and again in interviews that “A Beautiful Day,” for her, is a movie about masculinity. Her first two features, “Diary of a Teenage Girl” and “Can You Ever Forgive Me?” were quiet, empathetic portrayals of women, and burned with complicated, atypical femininity. Heller never expected to make a movie about men, she said. But when she read the script for “A Beautiful Day,” she knew she had to make it. She has said she was thinking, largely, of her young son — and about what young men learn from movies.

“For the same reason I want to make movies about women, I also want to make movies that help men be better men and that can be an antidote to toxic masculinity,” Heller told Elle in November. “And I think the beginning of that is so deep in Mister Rogers’s teachings — being able to admit your feelings, being able to access them, finding ways to be more connected to our humanity. And that’s what this movie was about for me.”

“A Beautiful Day” is a beautifully simple movie — a two-hour application of Rogers’ lessons to a difficult adult situation. Vogel is angry. His anger is weighing him down. He has to learn to deal with it, with Rogers as an example (played by Tom Hanks, who scored the film’s only Oscar nomination for his performance.)

“There are many things you can do with your feelings that don’t hurt yourself or anybody else,” Hanks as Rogers tells Vogel in a hotel room interview.

“Why, you can pound a lump of clay. Or swim as fast as you can swim. Or play the lowest keys on the piano all together,” says Rogers.

The interaction is underscored by Vogel’s suspicion of Rogers — that no one can be as perfect as he seems to be. But Rogers does get angry, even if others don’t see it. He’s just learned how to manage it. The last note comes later in “A Beautiful Day,” in the movie’s perfect last shot.

The Rogers-Vogel scene has a twin in “Little Women,” one that Gerwig pulled straight from Alcott’s novel. Jo bemoans the power her anger has over her to her endlessly patient mother, played by Laura Dern.

“What is wrong with me?” Jo asks. “I’ve made so many resolutions and written sad notes and cried over my sins but it doesn’t seem to help. When I get in a passion I get so savage, I could hurt anyone and enjoy it.”

“You remind me of myself,” her mother says. “I’m angry nearly every day of my life … I’m not patient by nature, but with nearly 40 years of effort I have learned not to let it get the better of me.”

In part, these two scenes illustrate the different ways men and women are taught to deal with their feelings. Jo knows her anger isn’t allowed, that she needs to curb it. And Vogel’s unchecked anger is probably more common than Rogers’ successful handling of his.

But Jo’s anger is more similar to Vogel’s than it might seem. It’s connected, in some way, to the masculinity she’s brimming with — her yearning to be a soldier, her fear of being a wife, the hard-to-define connection she feels to Timothée Chalamet’s Laurie. This has always been a part of Jo’s character, a reflection, in many ways, of Alcott herself. In her Oscar-nominated screenplay, Gerwig pulls and stretches at the queer subtext of the novel, adding details from Alcott’s own life and journals that make Jo more explicitly whatever-she-is than she was allowed to be in the 1860s. And somehow, as much as “Little Women ” is a story about the expectations placed on women, it’s a story about what it would mean to be a man as well.

“Jo is a girl with a boy’s name, Laurie is a boy with a girl’s name,” Gerwig told Vanity Fair this summer. The two characters swap clothes as well as proposals, although they don’t end up married. “In some ways they are each other’s twins.”

I have always been repulsed by certain facets of masculinity, but at the same time I want to steal the best parts of it for myself — a difficult balance to strike. I suspect Gerwig and Heller are trying to figure out the same things I am in these movies. And although neither of them took home any of the top prizes at last night’s Oscars, I really am an optimist about what the rise of directors like Gerwig and Heller means for film. As female directors become more prominent in Hollywood, we won’t just get more authentic stories about women and womanhood. We’ll get new perspectives on manhood as well.