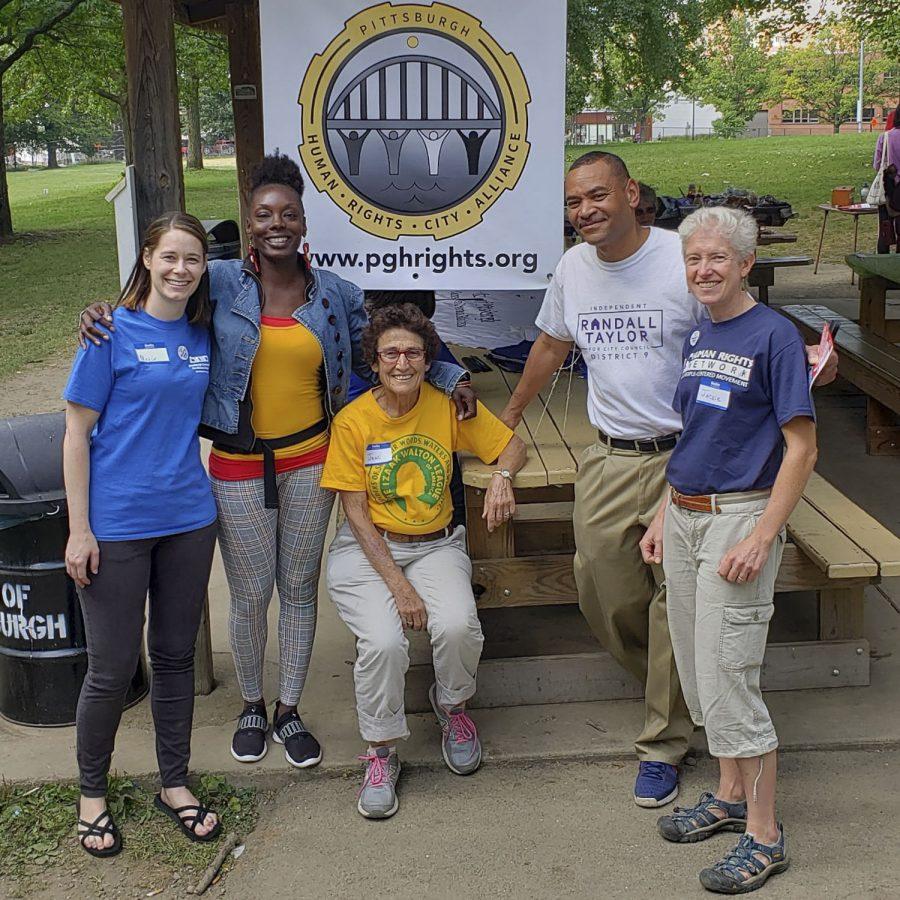 Jackie Smith (far right), a sociology professor at Pitt, is one of several researchers that collect data related to human rights in Pittsburgh.

By Katie Sottile, For The Pitt News

Though treating others the way you want to be treated might seem elementary, a Pitt professor is vying to uphold that standard.

Jackie Smith, a sociology professor at Pitt, serves as one of several researchers collecting anecdotal data related to human rights in the city of Pittsburgh. The conclusions drawn from the study will be compiled as a part of the Universal Periodic Review, a report that is published every four years to depict the human rights records of 193 United Nations Member States.

“What we’re doing in Pittsburgh and at the national level is getting popular groups into the process of thinking about what story needs to be told about the state of human rights,” Smith said. “It’s not just about saying what’s wrong and where the gaps are. The goal is to put forward some recommendations for what changes would improve human rights conditions.”

Smith and her colleagues gathered individual testimonies and analyzed secondary data provided from external organizations, such as the Pittsburgh Gender Equity Commission. The team is responsible for synthesizing its arguments to reflect key issues in Pittsburgh, then submitting it to the federal government. The United States will subsequently receive a review from the United Nations in May for the core human rights concerns facing the country.

“We’ve submitted our report and have a general sense of the key concerns we have in this data, but the fact that we put our report in doesn’t mean those things will automatically be in the report that the United States government gets,” Smith said. “Other governments have to pick up the things that we have documented and lift it up at the formal session at the U.N.”

Racial equity in Pittsburgh is at the forefront of Smith’s project. She collaborated with researchers in Chicago, New Orleans and Washington, D.C., to illustrate a decreased level of human rights for African Americans. By banding together, cities make their proposals stronger, especially when pitching them to other governments.

“We’re going to lobby those governments — reach out and say this is happening in Pittsburgh and these are the real stories,” Smith said. “They don’t want numbers, they want to see what this means for real people and why it should be emphasized over the hundreds of human rights issues that might be raised.”

According to Smith, incongruencies of human rights have strong racial and economic ties, particularly in the city of Pittsburgh. She cites the modification of the Pittsburgh housing market in addition to rising costs of living as problems that disproportionately affect African Americans.

“There was a study that showed that in the last four years, 7,000 African Americans in Pittsburgh were displaced, especially in black neighborhoods like East Liberty,” Smith said. “This is directly linked to the rising housing costs and the loss of support for public housing.”

Michael Goodhart, a political science professor at Pitt and member of the steering committee for Smith’s project, agreed that this disparity in human rights exhibits financial undertones.

“Wealthier people enjoy more of their human rights, and they enjoy them more securely, than do impoverished people,” Goodhart said. “The reasons for this are pretty straightforward — the richer one is the more likely one to have good health care and adequate nutrition and housing.”

While human rights can provide insight into the relationship between society and the economy, they also be utilized for political gain, Goodhart said. In the wake of major crises, including the Sept. 11 terrorist attacks and the global financial crisis of 2008, human rights data is used by social movement groups to challenge inequality.

“Human rights evolve in unexpected and unanticipated ways. Part of what makes human rights such a useful political tool for people involved in various kinds of social movement struggles is that they are so versatile and adaptable,” Goodhart said. “A huge academic debate has opened up about whether human rights are adequate for tackling social and economic inequality. Whether they succeed or not remains to be seen, but it’s not a question for academics to answer — the proof is in the pudding.”

As executive director, jain also collaborates with Pitt to ensure the continued rejection of inequality. She collects proposals for how to improve human rights conditions in Pittsburgh, including a pitch from a Sara Goodkind, a professor in Pitt’s School of Social Work. Goodkind’s team was awarded a $45,000 contract for its work in September 2019.

“The GEC is required by the local ordinance that created it to undertake a city-wide Gender Analysis,” jain said. “The Pitt team is continuing to work in parallel with the GEC to engage diverse local communities in talking about the implications.”

Upholding and protecting human rights conditions can be daunting in modern society, Smith said. Regardless, she wants to reiterate the importance of treating everyone equally.

“Human rights is a language that is not partisan. I think it is radical and it demands some fundamental changes in policy, but it doesn’t fit neatly into a Democratic or a Republican platform. Everybody wants rights to themselves,” Smith said.