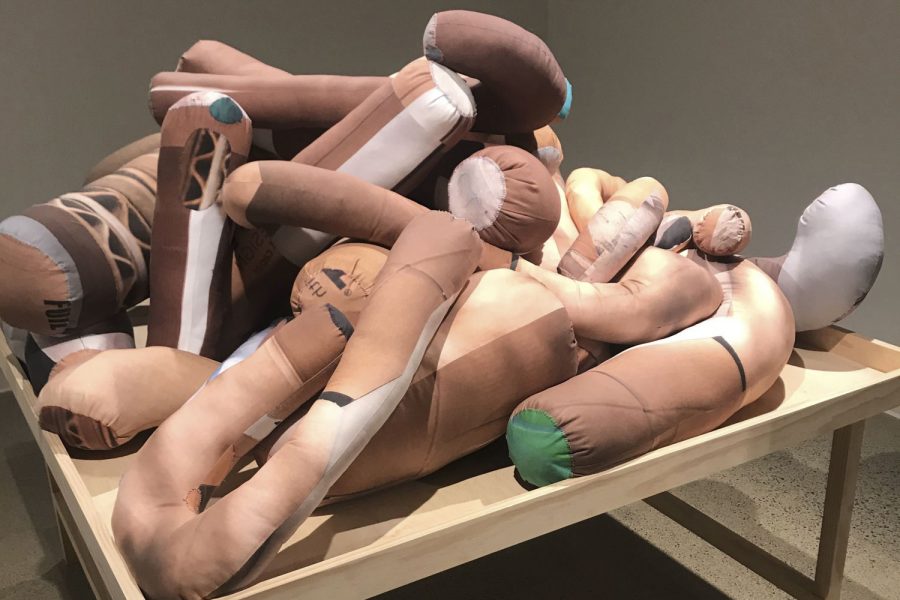 By Beatrice McDermott, For The Pitt News

An array of disembodied, floating eyeballs watched from above as people of all ages cradled squishy, handmade fabric intestines in their arms at the Silver Eye Center for Photography in Bloomfield Friday night.

The eyeballs and intestines are all part of a new exhibit by senior lecturer in the studio arts department Barbara Weissberger. Weissberger’s exhibit “Mother” explores the connection between artwork and body, and consists of photographs and objects that viewers can touch and hold. Drawing on her experience as a sculptor, she said she wanted to combine bizarre shapes constructed from fabric and cardboard with her work as a photographer.

Weissberger encourages viewers to seek out the relationship between her artwork and their own bodies, and allow themselves to become conscious of the way they perceive the world. She also said she wanted to offer a playful take on the idea of seeing body artwork from inside one’s own body.

“I wanted this show to really foreground the body. I want it to feel like you were in this world of body fragments,” Weissberger said during her gallery talk. “You’re inside the body, like when you’re inside your mother. I really felt like these images were preverbal in a lot of ways. It’s the infant’s view.”

Weissberger said she hopes to expand upon the various meanings of the word “mother” in her work. She constructs collages of “humble material” — like cardboard, window film and emergency blankets — then photographs and edits the results, which were on display in the exhibit. Sometimes, she even combines multiple photographs into a single piece, which she said was similar to how Frankenstein combined dozens of body parts to bring his monster to life in Mary Shelley’s eponymous novel.

“There’s a fraught relationship between the creator and creation,” Weissberger said. “The hand is stitching the hand.”

Kate Joranson, the head of the Frick Fine Arts Library, was one of the many people who attended the opening reception at Silver Eye on Friday night. She also drew a comparison between “Frankenstein” and “Mother.”

“I loved the discussion in the artist talk about ‘Frankenstein.’ I found that really interesting. You’re making something that then has life beyond what you’ve put into it,” Joranson said.

The photographs in the exhibit were hung at varying heights, so viewers were forced to crouch or stretch to view the artwork. Joranson, an artist and librarian, said one of her favorite parts of the exhibit was the way Weissberger utilizes the unconventional space of the gallery.

“I feel like she was really engaging our bodies as viewers, because we were leaning, or crouching, or dealing with our own symmetry,” Joranson said. “There was something very body and physical in her choices.”

Weissberger also discussed how the gallery space impacted the methodology she used to display her artwork. The Silver Eye Center is divided into two distinct areas — the spacious, well-lit gallery in the front, which solely exhibits photographs and tapestries, and the darker, more intimate room in the back that contains the tactile sculptural elements. Weissberger said viewers should take some time to appreciate the juxtaposition between the areas.

“I really thought about this particular gallery, and this situation where there’s a large public space and a smaller more private space in the back,” Weissberger said. “That definitely influenced the type of work I made for these rooms, these galleries.”

According to plaques posted around the gallery, viewers are welcome to hold the artwork and feel the way it fits within the shape of their body. They’re also encouraged to find their own meaning in the artwork — for example, it can symbolize a mother holding her child in her arms, or even the vasiform intestines of the inner body. Joranson said she was fascinated by Weissberger’s artistic process and the friendly presence of the artwork.

“She had these photographs printed on fabric and then she sewed them into soft sculptures that we could hold, and to be able to cuddle with a photograph is pretty unique,” Joranson said. “It’s not typical in that photography space to be able to touch and engage with the work so directly.”

Kate Kelley, the assistant curator at Silver Eye, provided her own perspective on the work that featured the stuffed objects, entitled “Hold Me” in her essay, aptly titled “Mother.” The essay was available to viewers in the gallery guide.

“It is always clear precisely what kind of body or bodies are being created,” Kelley wrote. “Instead, there is a suggestive ambiguity to how ‘mother’ functions here, as forms and shapes slip into one another, disturbing any clear reading of how they come together to form a whole.”

At the end of the article, Kelley maintains that “Mother” isn’t a question that viewers need to — or even should — solve. She said the exhibit is confusing and weird, but more importantly, it’s open to interpretation.

“Weissberger has made a space to get cozy with the uncomfortable and the unknowable, and to enjoy feeling unmoored, at least a little, as we entertain new ideas about creation and creators,” Kelley wrote. “Weissberger offers us an enigmatic narrative of both fact and illusion, mystery and humor.”

“Mother” will be open and free to the public until March 21. Before the exhibit leaves Pittsburgh, Joranson said that she recommends students attend the gallery and experience the weirdness for themselves. And, if that seems enjoyable, she also asks students to consider applying Weissberger’s techniques in their own work.

“I think it would be fun. There’s a generosity in her work that makes it really accessible to students. She shows you how she made the photo, in the photo. She’s not trying to set up illusions,” Joranson said.