Review | “P.S I Still Love You” opens its heart to more than romance 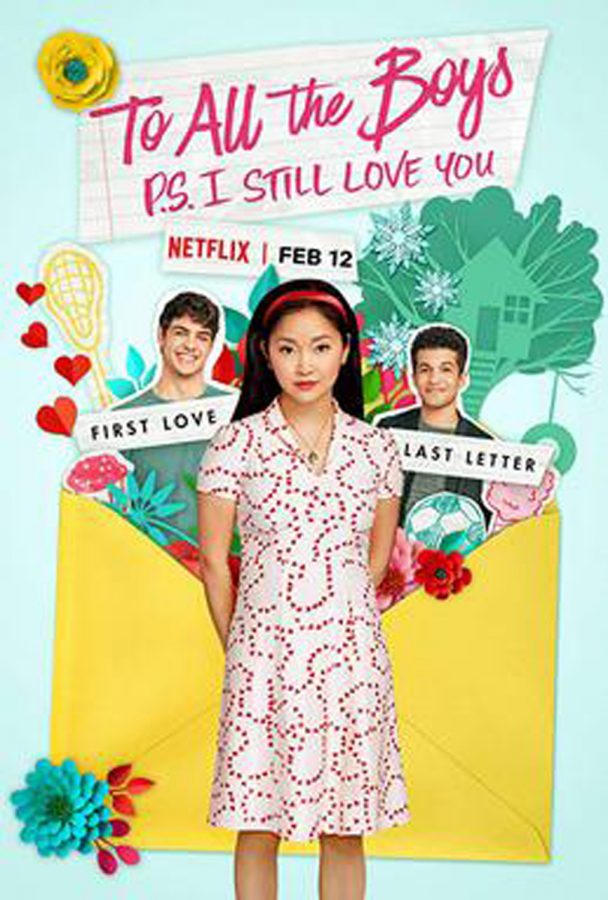 “To All The Boys I Loved Before: P.S. I Still Love You” release poster.

Teen movies, especially teen romances, tend to be either instant hits or bombs that fade away from notoriety after a month of release. In 2018, Netflix hit a home run with “To All The Boys I Loved Before,” based on the novel of the same name by Jenny Han. Praised by critics and audiences, the film is one of Netflix’s most-watched original films ever.

Its sequel, “To All The Boys I Loved Before: P.S. I Still Love You,” which will be released on the platform on Feb. 12, might not promise the notoriety that its predecessor carries, but heralds just as many fun and heart-warming moments.

“To All The Boys I Loved Before: P.S. I Still Love You” carries on the story of Lara Jean Covey (Lana Condor) who, after the last movie’s conclusion, is finally starting her new relationship with certified heartthrob Peter Kavinsky (Noah Centineo), one of the most popular boys at school.

But their newfound happiness comes into question when one of Lara Jean’s love letters, mailed out to five boys by her sister in the previous film, yields a response from John Ambrose McClaren (Jordan Fisher), her other middle school crush.

The movie lacks that nail-biting anticipation of the original — the wait for the happily ever after — and loses some of the excitement because of that, but it succeeds in other ways. It’s not a story of love, but heartbreak in the 21st century, complete with a damning Instagram story.

Stormy (Holland Taylor), a new character who serves as a kind of wizened love guru to Lara Jean, gives her some rather spectacular advice on the subject. When Lara Jean tells Stormy that she and Peter promised they would not break each others hearts, Stormy tells her that in love, if you’re not getting your heart broken, you’re not doing it right.

This is the essence of the movie — heartbreak. High school for many teenagers is about getting your heart broken. It’s almost a rite of passage, because heartbreak doesn’t just disappear once you’ve escaped teenagedom, and you better learn how to deal with it early on.

And in today’s internet and social media-dominated world, high school doesn’t stop at the physical school campus. All of its hate extends into your cell phone, your house, with every like and status update.

“P.S. I Still Love You” looks like an Instagram feed. It’s colorful, everyone’s wearing trendy outfits and Lara Jean is always frosting some beautiful cupcakes or something. I like to think baking is her stress relief.

I think having “P.S. I Still Love You” set in the present day makes it even more appealing to Netflix’s audiences. It speaks to the millions of viewers who waver on that line of a world without the internet, a time when half your life wasn’t put on display for the world. I was born in 2001, and I don’t remember a time without the internet, because it was created before I was.

For Lara Jean, this is also true. A moment of tension arises between her and Peter in the movie because of something put out on social media. Together they have to decide whether or not past posts and past decisions matter in the present.

Of course you don’t have to be born after 1995 to enjoy “P.S. I Still Love You.” It’s still, at its bare bones, about being a teenager, and, well, we’ve all been there. Some of us are still crawling our way out of it.

One of the things that “P.S. I Still Love You” does well is capture the real intricacies of high school relationships. Not everything is dialed up for the drama of the movie screen — it’s kept real and awkward and intimate. There is much secondhand embarrassment to be had in this movie, and Lara Jean and Peter sabotage themselves quite often.

In one scene, Lara Jean gets together with a bunch of her old middle school friends — including Peter and John Ambrose — to open up an old time capsule they buried beneath a tree house in the seventh grade. This gathering is filled with passive-aggressive quips from both boys and awkwardness from friends on all sides who have grown apart from one another.

Now I don’t know about anyone else, but that’s how my high school experience was. Good things about it aside, there was a lot of toxic and stifled history buried between me and old friends. This made run-ins in the hallway and unexpected encounters at the grocery store weighted and uncomfortable.

After this gathering, Lara Jean and Peter stay to clean up. They get into a fight, but it’s not anything explosive. It’s subdued, they jab at each other, and it’s so painfully clear how young they are.

My favorite scene in the movie by far happens toward the end, where Lara Jean is probably at her lowest. She invites someone up to the infamous time capsule treehouse, whose identity the audience is not made aware of, to clear the air between them. We assume it’s Peter or John Ambrose or anybody but who it actually turns out to be.

Spoiler alert — the guest is Gen, Lara Jean’s ex-best friend and Peter’s ex-girlfriend who in the last movie had been the catalyst of Peter and Lara Jean’s fake-dating arrangement, until they actually fell in love with each other. It’s weird to have a conversation with someone like that, who at one time meant the whole world to you, but now wavers in this kind of in-between.

Gen and Lara Jean exchange stilted words with one another about Peter, about some rumors, about themselves. They achieve a truce, and I got a warm feeling in my stomach watching it happen.

Behind the lovey-doveyness of Lara Jean and Peter’s relationship, the movie shines in its connections between people. Some fans may like this movie less than the first installment because of how the sequel focuses more on the healing part of love than the chase.

But sometimes that’s something that we need and don’t ask for — a clean slate with someone, putting the past behind you and trusting yourself not to look into the rearview mirror quite so often.