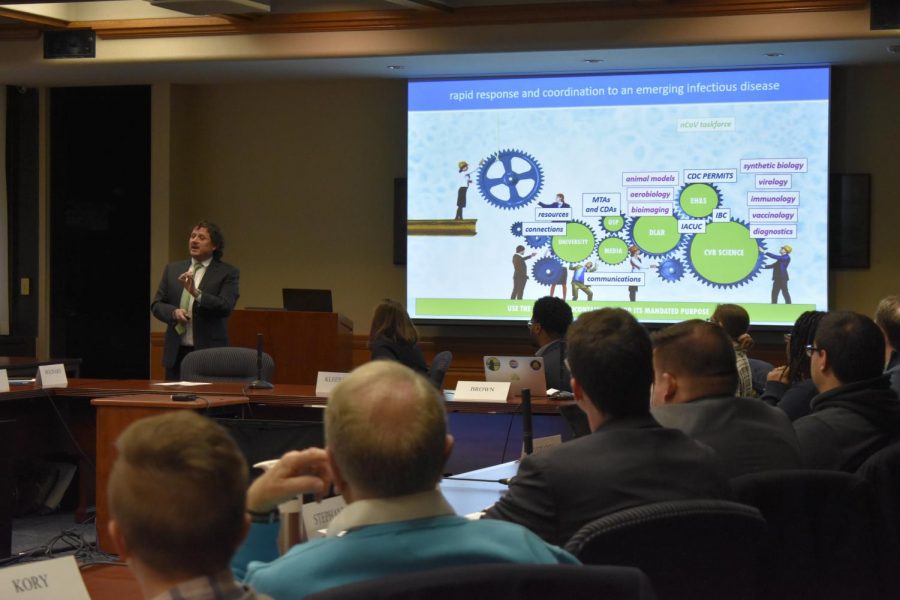 Dr. Paul Duprex, director of Pitt’s Center for Vaccine Research, announced at Wednesday’s Senate Council meeting that the University seeks to acquire samples of the novel coronavirus in an effort to develop an intervention.

By Jon Moss and Lucy Li

A high-level Pitt health official announced Wednesday that the University will acquire samples of the novel coronavirus in an effort to develop an intervention, such as a vaccine.

Dr. Paul Duprex, director of Pitt’s Center for Vaccine Research, said at Wednesday afternoon’s Senate Council meeting that the center is racing to complete a funding proposal by a Friday deadline.

Duprex added that Pitt is one of three universities in the United States which could properly handle high-risk pathogens, and it is already preparing for its arrival from the U.S. Centers for Disease Control and Prevention.

“This is a rich University which does a lot of high-quality infection biology research,” Duprex said. “We are already prepping the cells so that they are ready to grow the virus, to produce the virus, to do work on the virus whenever it arrives in Pittsburgh.”

The novel coronavirus is a member of the coronavirus family of viruses, some of which can infect animals and people, such as the current 2019-nCoV strain under global scrutiny. This strain causes the COVID-19 disease, which has claimed the lives of more than 1,100 people globally, with 14 current confirmed cases in the United States and more than 45,000 worldwide. Public health officials have warned the virus could turn into a much wider outbreak, similar to the SARS and MERS cousins of the 2019-nCoV strain, which have caused outbreaks in the past.

Pitt has played a role in quelling public health emergencies in the past, most notably with polio after World War II. The federal government approved a vaccine created by Dr. Jonas Salk in 1955 which led to a massive reduction in the number of cases of the disease.

Chancellor Patrick Gallagher said at the Wednesday meeting that it is important for students to stick to the facts as misinformation swirls about the outbreak.

“The main point is, you know, this is not a time for widespread fear, but to get informed,” Gallagher said. “The actions are pretty straightforward.”

He added that while the outbreak may have begun in China, it is not acceptable to target people of Chinese or Asian descent based on the virus.

“This could have happened anywhere,” Gallagher said. “There are people not infected on our campus, but are directly affected because they have family or friends that may be impacted.”

Pitt announced two weeks ago that it was taking several steps to try and protect the University community from the global outbreak.

The University instructed all community members who planned to travel to China to cancel their plans, and either relocated or scrapped all study abroad programming in China. Pitt is also screening all faculty and staff who have traveled internationally, as well as students who visit the Student Health Center after trips abroad.