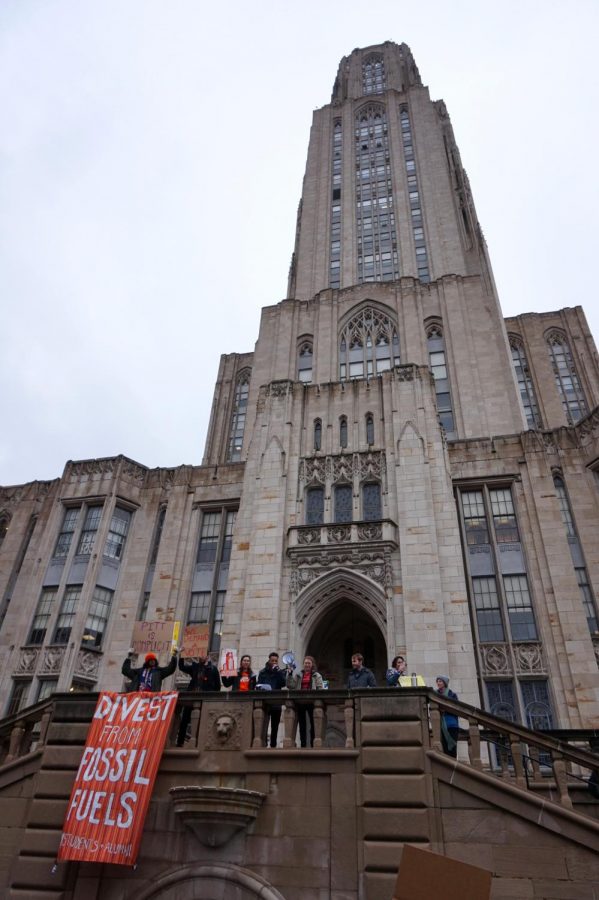 As a part of Fossil Fuel Divestment Day, a nationwide event that, according to the organizers, only marks the beginning of the ‘mass escalation’ of the divestment movement in 2020, Fossil Free Pitt held a rally outside the Cathedral of Learning Thursday.

By Nathan Fitchett, For The Pitt News

“Pitt step off it! Put people over profit!” they chanted.

About 100 protesters gathered in front of the balcony on the Bigelow Boulevard side of the Cathedral of Learning to protest Pitt’s continued investment of its endowment in the fossil fuel industry. The Fossil Free Pitt Coalition — a confederation of student organizations that work to try to convince Pitt to divest the endowment from the fossil fuel industry — organized the event.

The rally took place on Fossil Fuel Divestment Day — an event held in conjunction with more than 50 different campaigns on other campuses nationwide. The event aims to encourage universities across the country to stop investing in fossil fuels. The day was created and organized by Divest Ed, an organization established to help students create and sustain divestment movements at their respective universities in order to help combat climate change.

Some protesters — wearing orange, the official color of the divestment movement — held cardboard signs with messages like “Pitt is complicit” and “We demand a vote,” painted in bold letters. Volunteers walked around the outside of the Cathedral to hand out informational flyers and pins made of little squares of orange felt attached to a safety pin. After speeches from event organizers, the organizers set off several orange smoke bombs which flooded the Cathedral courtyard with a tangerine haze.

Prem Rajgotal, a graduate student in sustainable engineering and an FFPC event organizer, said the issue goes beyond concerns of profitability.

“It’s really important because Pitt claims to be at the forefront of sustainability as a university, they like to tout the work that they do,” Rajgotal said, “but at the same time if they’re complicit in investing in fossil fuels then they’re really just being hypocrites.”

University spokesperson Kevin Zwick said in a statement that Pitt has been working to become a more sustainable campus and address the University’s impact on the environment. These efforts include creating the Office of Sustainability, reducing greenhouse gas emissions by 22.2% since 2008, as well as sourcing electricity from a low-impact, local hydropower plant, which will supply about 25% of the University’s electricity by 2022.

“The University of Pittsburgh remains committed to being a leader in sustainability and doing our part in combating global climate change,” Zwick said. “This work is ongoing and includes a larger dialogue that our community is currently and actively engaged in.”

FFPC has been protesting against Pitt’s investment in fossil fuels since its formation in 2014. The organization has been staging a series of protests this academic year to try to put more pressure on the University to vote to divest at the next Board of Trustees meeting on Feb. 28.

The decision to divest is not solely in the hands of University administrators like Chancellor Patrick Gallagher, but instead resides with Pitt’s entire Board of Trustees, who oversee the University’s endowment fund and decide what to re-invest the fund into. Gallagher said in a University Senate Council meeting last October that the board needs to be convinced there is a fiduciary reason for divestment in order to protect the endowment’s financial returns before they will vote to do so.

Gallagher announced last August that the University would implement several socially responsible investing strategies, such as expanding and leveraging the University’s 2018 sustainability plan. He also tasked Chief Financial Officer Hari Sastry with developing environmental, social and governance criteria to “positively screen” investments, to be presented to the Investment Committee of the Board of Trustees for a vote. Sastry will also screen and present proposed investment exclusions to the full Board of Trustees.

One of the major grievances Fossil Free Pitt has raised against the Board of Trustees is a lack of communication with the larger student body concerning the specifics around where and how much of the endowment money is being invested in fossil fuels. Anaïs Peterson, one of the core FFPC organizers, said achieving this transparency is one of Fossil Free Pitt’s major focuses.

“We need transparency about the endowment and what’s happening at the Board of Trustees,” Peterson said. “We’re so often left out of the conversations and Pitt’s focus is always about the profits, its image and administrator’s salaries, rather than what they can actually do for their students.”

Zwick said the Board of Trustees has some channels of communication with students, but the board largely delegates meetings with students to upper-level University administrators, who then relay the concerns back to the board. FFPC representatives met with these administrators many times over the past few years since the divestment campaign began. Students also sit on the board’s Student Affairs Committee and the University Senate Council, who additionally bring issues to the board.

“Chancellor Gallagher has supported — and continues to support — giving students opportunities to engage and formally share their views on complex issues, such as on the topic of socially responsible investing,” Zwick said.

Juan Bonetti, a senior communications major, said he attended the rally because he believes that Pitt’s investments in fossil fuels are setting a bad example for students.

“We’re thought leaders — as an academic institution we’re supposed to be injecting the thoughts that are important and valuable into our society,” Bonetti said. “Having investments in fossil fuels just sends the wrong message and is clearly not the right thing for this world, which is not what education and academia is about.”