Column: Women have earned their space in sports 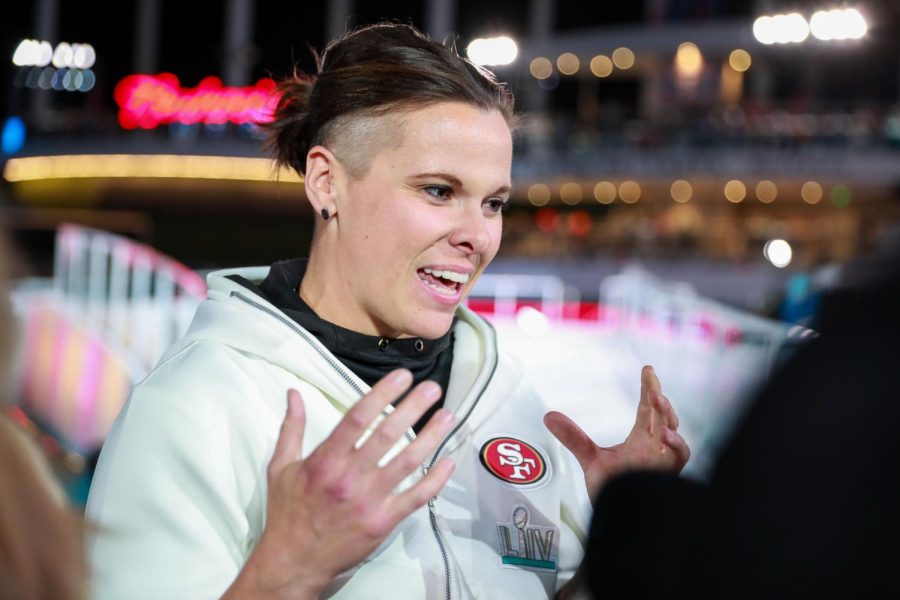 By Hope Matyas, For the Pitt News

While Shakira and J-Lo brought sex to the stage of the biggest game day in America, the bigger story regarding sex — the other kind, that is — was in the locker room. Katie Sowers of the San Francisco 49ers made her appearance as the first woman assistant coach to reach the Super Bowl just a few weeks ago. But her accomplishment should be considered a starting point rather than an end goal.

“The most important thing is I’m not the last and we continue to grow it,” Sowers told ESPN.

Sowers’ efforts to build her coaching resume are slowly paving the way for girls and women — including every person who identifies as a woman — everywhere to realize their place is wherever they put the work in, whether that be on the stage dripping in sex appeal or talking strategy during a time out.

The 34th annual celebration of National Girls and Women in Sports Day, created by the Women’s Sports Foundation, recently came and passed on Feb. 5. The celebration is meant to inspire women to reach their “full power” through participation in sport and implement that power in all areas of life.

Sports reveal character and develop physical and mental strength while teaching responsibility and leadership. Leaving space for women in sports creates more opportunities for women to develop these skill sets in an environment that is competitive and focused with a team mentality.

Sowers started in the league as a wide receivers intern for the Atlanta Falcons during their offseason and training camp sessions before joining San Francisco in 2017 as a seasonal offensive assistant. She was promoted to her current role ahead of the 2019 season. Trusting Sowers in positions of authority based on experience gave her the ability to help take her team all the way to the final stage.

The Washington Redskins followed suit, recently announcing new hire Jennifer King — the first African American female assistant coach regular-season intern. King’s qualifications uphold her — she interned with the Carolina Panthers for two years of offseason summer training and worked at Dartmouth College as an offensive assistant in the fall of 2019. She previously played multiple positions for the Carolina Phoenix, New York Sharks and DC Divas of the Women’s Football Association. She and the Sharks took home the national championship in 2018.

It’s safe to say championships are soon to be earned by the dedication and qualification of badass women in power. The University of Pittsburgh is no stranger to success when implementing strides towards gender equity in athletic representation.

Just look at the fall of 2019 and Chrissy Shannon’s debut as the first female head drum major of the Pitt Band. Seven years of experience in a marching band preceded her time at Pitt, all spent accumulating the skill and talent that would put her above the rest when looking for someone new to keep the band in time.

Further back, the University appointed Heather Lyke as athletic director in 2017. Under her supervision, Pitt athletics have flourished. Rebranding Pitt athletics with top-tier coaches — most notably men’s basketball head coach Jeff Capel — has forged a competitive empire leading by example.

Recognizing the greatness of last year’s Women’s Club Lacrosse team, Lyke paved the way for them to compete as a fully funded varsity sport in 2021-22. Her commitment to honoring the achievements of Pitt Athletics aligns with the establishment of the Pitt Athletics Hall of Fame in 2018, created to honor those student-athletes, coaches and teams “who have performed with distinction and been instrumental in the success of Pitt Athletics.”

Athleticism by definition lies in the display of characteristics such as strength, fitness and agility. When women celebrate their success in sport it is too often labelled as aggressive or emotional, but a man is free to flaunt the reaping of his hard work in end zone dances, spikes and cheers.

Creating space for women in sports serves success and growth but is only attainable when they are respected as athletes or officials, rather than leaning into patterns of gender bias and not recognizing women as strong, fit and agile. Let qualifications speak for themselves, gender aside.