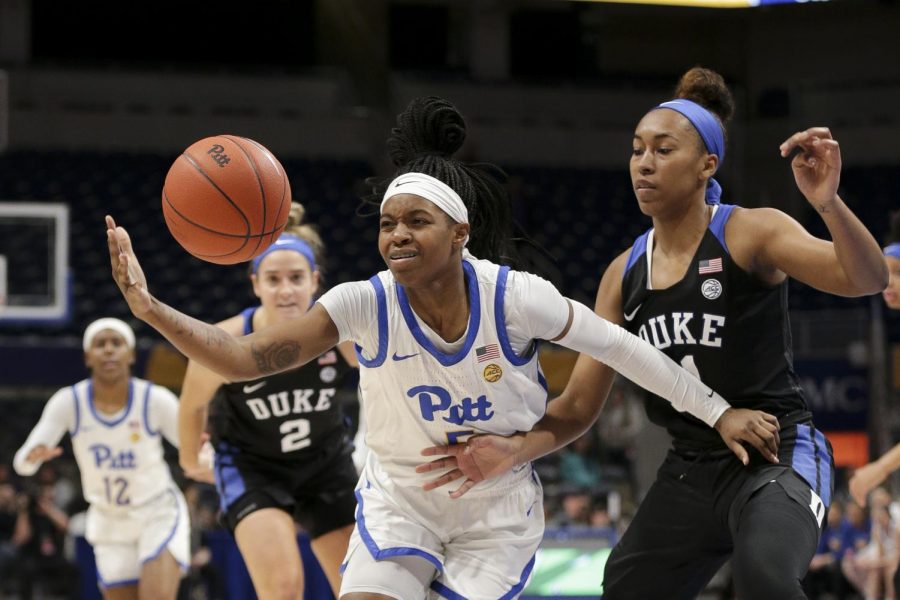 First-year guard Amber Brown (5) loses control of the ball during Pitt’s 73-56 loss to Duke on Thursday.

With its two leading scorers out of action Thursday night at the Petersen Events Center, Pitt women’s basketball faced long odds at beating Duke. And though the Panthers did lose, 73-56, the bigger story was that they outplayed the Blue Devils for half the game, largely thanks to a breakout performance from first-year forward Rita Igbokwe.

In Pitt’s third straight game without redshirt senior guard Aysia Bugg and first without first-year guard Dayshanette Harris, Igbokwe tallied a career-high 15 points and 32 minutes, also leading Pitt with 11 rebounds. She said after the game that her teammates encouraged her to be more aggressive.

“I remember Amber [Brown] and Gabbie [Green] saying before the game, ‘You need to have 10 more rebounds and 10 more points.’ I was like, ‘I got y’all,’” Igbokwe said. “So, just coming into this game I had that mentality like, ‘Dang, my team needs me now.’”

The Panthers certainly did need Igbokwe’s production during an otherwise ugly night that saw them shoot 1-13 from 3-point range. Her steady presence in the paint helped Pitt outscore Duke 18-16 in the second quarter and 19-14 in the fourth.

“[Rita’s] way too nice,” Pitt head coach Lance White said. “We call it ‘beast mode.’ She’s got to pull that beast out, because she’s got it in her. And she’s going to be a really hard to handle player in our conference as soon as she gets that mentality, to believe that she’s one of the best post players in the country.”

Pitt’s troubles came in the first and third quarters, as Duke outscored the Panthers 22-12 and 21-7, respectively. The Panthers had no answer defensively for graduate guard Haley Gorecki, who scored 17 points on 3-5 shooting from deep, and senior forward Leaonna Odom, who canned mid-range jumpers at will to lead Duke with 20 points.

Turnovers were obviously a major issue for Pitt with its two primary ball-handlers sidelined. The Panthers gave the ball away 24 times, leading to 22 Blue Devil Points.

With White, Igbokwe and Brown at the podium after the game, there was a palpable energy that stemmed from Pitt’s young players showing flashes of potential in increased roles.

“Recruiting this first class to Pitt, I was extremely honest about what we had to do and how hard it was going to be game after game of these guys learning under the lights,” White said. “You have to learn to learn it and experience it. Once you get those experiences, you know better, you do better and I’m really excited where we’re going.”

Brown and Igbokwe summed up the team’s optimism best with their postgame comments.

“We’re having fun,” Igbokwe said. “Like, we’ve lost a lot of games but look, I’m having fun and I think that really shows in our games … it might not be this year but look, the next three years we’re here, we’re gonna dog somebody, I promise you that.”

For Pitt to make strides forward, it will need Igbokwe to play as she did against Duke every game — even when Harris and Bugg return. She acknowledged as much, expressing the desire to step into a larger role.

“I hope, especially towards the rest of the season, that I can carry that on, especially since my team’s going to continue to need me,” she said. “And we can come together more as a team and, hopefully, beat some butt.”

Next, Pitt will hit the road to take on rival Syracuse Sunday at 1 p.m.