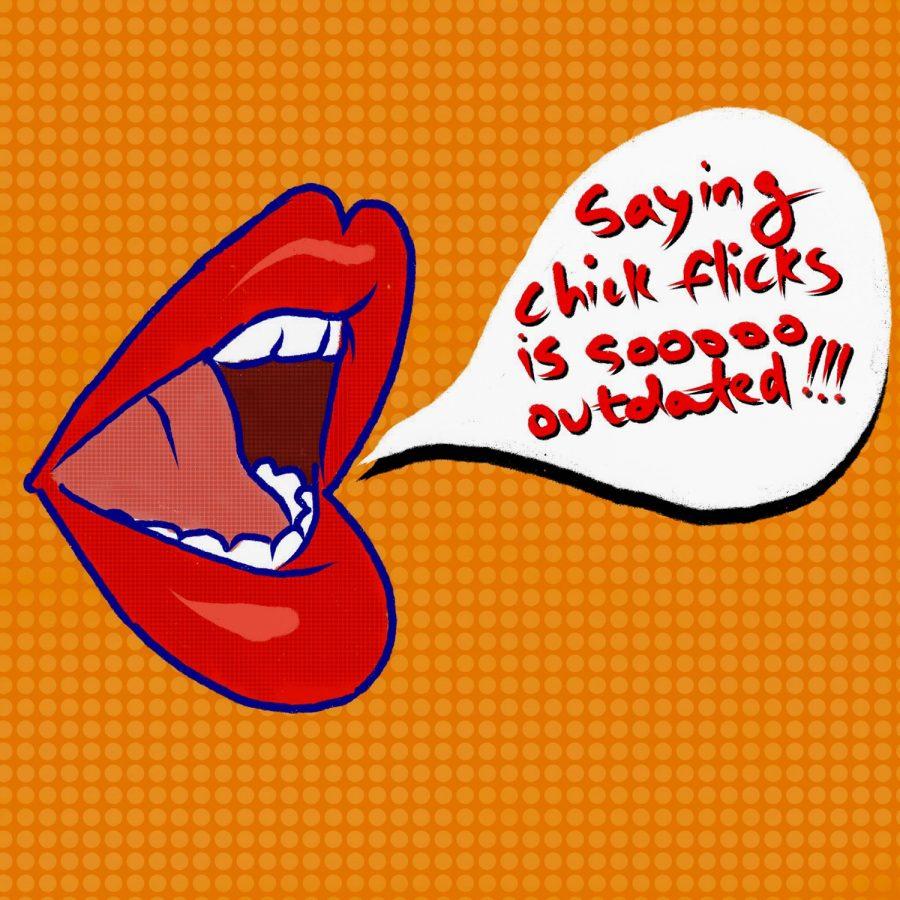 The term “chick flick” arose from “woman’s film,” a genre created mostly by men in the 1930s. A “woman’s film” was about women and for women as an audience.

This is not to be confused with “women’s cinema,” which signals a film made by a woman. These early films characterized themselves by covering complex issues facing women, including, but not limited to, identity, motherhood, marriage, materialism and loneliness. Many of these films were considered melodramas, which is to say that they weren’t taken seriously, much like films about women today. The “chick flicks” of today still concern the exact same issues as their predecessors, yet throughout history the depth of feminine films have been ignored.

With Valentine’s romantic comedy season in full swing — it seems to last for all of February — we need to stop using the term “chick flick.” Multiple feminist theorists have already denounced the term for delegitimzing feminine media, yet every February the term pops up tenfold. Films about women and for women should simply be considered films. Our stories are for everyone and they matter, even if the world isn’t ready to accept it yet. A change in terminology will help ease us into a more accepting future.

“Chick flick” as a term has multiple issues.

Hallmark movies and “chick flick”-type films may be feminized, but they are not solely for one gender. The idea of a binary “for men” cinema and “for women” cinema is harmful and incorrect in nature. Not only does this idea of male-versus-female cinema privilege the incorrect gender binary system, but it also further divides creators and fans into what they can make and watch, limiting forms of expression.

An ex-boyfriend of mine always said his favorite part of the year was watching Hallmark movies with his mother. These movies are important vessels for interpersonal connection and memories that shouldn’t be limited to one gender. Many people, regardless of gender identity, have experienced a great love like in “The Notebook.” Many people have been cheated on, have fallen for their best friend’s husband — oh, maybe only me — and have experienced heartbreak. These experiences aren’t just lived by women, they are universal. We are expected from birth to identify with stories where men are the heroes, the villains, the knights — why can’t we do the same for women?

Masculine-coded media is not given a childish name — we call movies ostensibly “for men” just that, movies. The silly colloquial etymology of “chick flick” delegitimizes and makes fun of feminine media. “Flick” reads as less serious than the word “movie,” miles away from the highest word of them all — “film.”

For example, in our current cultural discourse around film, where art films are given higher levels of intellectual importance than mainstream media, “Avengers” would be considered a movie, while something like “Phantom Thread” or any other Oscar bait may be considered a “film.” So under that logic, a “flick” is of even lower status. Its name betrays its alleged worth — it’s spoken as slang, not a word you would ever use in an academic essay. Can you imagine calling a movie a “flick” in an essay? You would never.

While some feminine media is indeed shallow — and female movie cannon does of course have problems with race and sexuality as much as any other “genre” — masculine media with similar fun, lighthearted premises is not critiqued nearly as much as its feminine “other.” Think the “Fast and Furious” franchise, or much of Seth Rogen’s filmography, or “Daddy’s Home” 1 and 2. The focus on shaming feminine media while ignoring the same issues of sexism, racism, homophobia and transphobia in masculine media is misogynist and one-sided. This focus limits important conversations that need to be had about how romance, drama and comedy play out on screen.

Simply put, these movies are good movies and, as such, don’t need a term that insults them. Feminine media is often ignored, derided, simply due to its being feminine. “Breakfast at Tiffany’s,” “Little Women,” “La La Land,” “To All the Boys I’ve Loved Before” — these movies all fall under the term “chick flick,” but they are remarkable, important films of our history. Acting like the stories of women onscreen are automatically shallow and stupid due to their being, well, women onscreen is archaic and ignores the great stories of women that have come to shape our national understanding of what it means to be human.

I could go on. “Bridesmaids,” “The Devil Wears Prada,” “Mean Girls,” “Clueless,” “Legally Blonde,” “Dirty Dancing,” “When Harry Met Sally,” “The Princess Diaries” — if staunch lovers of solely masculine media would give these films a real chance, they’d see stories of friendships and betrayals and revenge and violence and love — everything that the world only respects when it’s told in a tale about men.

I’d be amiss not to mention the attempts at reclaiming the phrase. I’m all for taking our power back via language, but “chick flick” can’t be reclaimed. There’s too much inherent in the subtext of those two little words — trying to take this phrase back seems an exercise in futility. You can’t make the word “chick,” the word “flick,” not sound derogatory and base. Because the term is widely used to describe any film made by or for women, it’s not reclaimable. I’m all for irony, but, in this case, keeping “chick flick” would harm all of the women working so hard in film right now.

Stop calling films about women “chick flicks,” and start calling them movies. Just movies. Some good, some bad — all deserve to be viewed sans a gendered lens, given the basic time of day that we extend to masculine media like “Hot Tub Time Machine” or “Sausage Party,” for crying out loud.

Genna writes humor and satire primarily about gender politics, film and other media for The Pitt News. Write to Genna at [email protected].