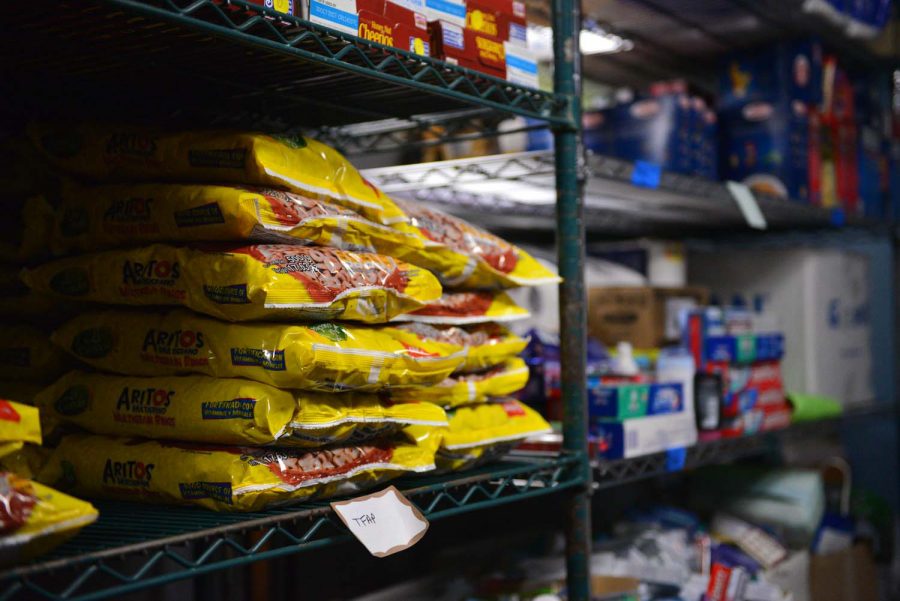 The Pitt Pantry shares the excess food that it receives with Pitt Foodshare. The extra donated food is available to any student.

There is no greater joy than stumbling upon free food on campus. But for those who’d prefer a heads up, the Pitt FoodShare Facebook group is the place to look.

Here, students can post about bagels, walking tacos, sandwiches and other food left over from events around campus, free for the taking — but not every Pitt student is aware of the Pitt FoodShare page. Of more than 28,000 students at Pitt, fewer than 4,000 are members of the group. While the group is University-sponsored, it remains out of view for many.

Students like Oliver Yao, a first-year economics major and member of the Pitt FoodShare group, only heard about the page through word of mouth.

“People don’t know about [the page],” Yao said. “Whether it’s through flyers on campus or whether it’s … at the bottom of an email … more awareness could be appreciated.”

According to a New York Times article about food insecurity, Sodexo will alert students at Northern Arizona University to leftover food from campus events — a program called Louie’s Leftovers. To register for the program, students must have the University’s NAUgo app on their phone and must opt-in to the Louie’s Leftovers notifications. Events with Sodexo catering have the option to share their extra food via Louie’s Leftovers upon ordering the catering. After the event is complete and leftovers are available, the host must fill out a form detailing the location, amount of food and how long it will be there, then a notification is sent out.

While Pitt does not have a formal program like NAU, Pitt students and staff do similar work through the Pitt FoodShare page. According to Sawyer Sidelinger, Pitt’s Sodexo sustainability coordinator, this page functions much like Sodexo’s NAU program.

“I believe that Sodexo was in on the planning and implementation of the food share program,” Sidelinger said via email. “Both [the NAU and Pitt FoodShare] programs let the event host post the opportunity to food share.”

While Sodexo supports the Pitt FoodShare page, Sidelinger said they do not post.
“Currently, the majority of events are catered through Sodexo on Pitt’s campus. While our catering staff does not post on the Pitt FoodShare page, we inform others of the option,” Sidelinger said. “Due to food safety, we only permit food sharing to occur at events that are not staffed by Sodexo.”

According to Erika Ninos, the Student Affairs sustainability coordinator, Pitt FoodShare began in 2016 as a Student Affairs-supported project to reduce uneaten, and therefore wasted, food on campus.

Like the NAU program, students must elect to be notified. A student must join the group, then tell Facebook to alert them when a post is made, as it is not done so automatically.

According to Ninos, anyone can post on the Facebook page. Based on recent posts, they are mainly made by students and staff, who advertise all sorts of food — from free salad in the Union to sandwiches at Alumni Hall.

“It is a public Facebook page and anyone can join and post when there is excess food available,” Ninos said via email. “The page is very much a community in that members of the page do a good job at policing it.”

When food is posted, it can go quickly, according to Erin O’Rourke, a junior computer science and political science major and a member of the Pitt FoodShare group.

“I posted about food available around 7 p.m., and, within 45 minutes, probably 10-12 students came,” O’Rourke said. “And many took food away in bags for later.”

Yao experienced a similar event when posting leftover food from an event in the Union.

“Even before I pressed the post button, word already got out around the Union, just through word of mouth, that there was a lot of free food,” Yao said. “So even before I posted there were swarms of people coming in, and then after I posted another 30 people or so came in and cleared the food within 10 minutes.”

The page requires that food posted may not be in small quantities or unsafe to eat after a period of time. These rules were set by Student Affairs and Sodexo, according to Ninos and Sidelinger.

In addition to Student Affairs, the Pitt Pantry, an on-campus food bank for students in need, is involved in the Pitt FoodShare group, often posting extra food. According to Sustainability Program Assistant Ciara Stehley, the page has directed students in need to the pantry.

“We do have pantry users who found out about us through our FoodShare posts,” Stehley said via email. “[Students] have expressed that visiting the Pantry for produce or recovered food made them feel more comfortable about utilizing our other services.”

Stehley said the Pitt Pantry receives more food than it needs, so they share it with Pitt FoodShare. The pantry’s extra donated food is open to any student, not just those who qualify for assistance to shop through the pantry by having an income that is less than 150% of the federal poverty line. Caleb Hart, a senior linguistics major and member of the Pitt FoodShare group, said he used the page to check for extra food at the Pitt Pantry about once or twice a month.

“Especially for individuals with food insecurity, it can be a real asset,” Hart said.

The Food Recovery Heroes, a program through the nonprofit 412 Food Rescue, also assists with on-campus food waste reduction. According to Sidelinger, volunteers pick up to-be-wasted food from dining halls and University dining locations and take it to nonprofits like the Pitt Pantry, where it then can be shared to Pitt FoodShare.

“The Food Recovery Heroes pick up most days from different locations around campus and utilize 412 Food Rescue to find places to take the food,” Sidelinger said. “We rescued approximately over 15,000 pounds of food in 2019.”

“I also think it could be expounded and developed more,” Hart said. “Better accessibility. Maybe some sort of external app. A platform to advocate for food insecurity. Lots of opportunities are there.”

O’Rourke said the group is an important part of the Pitt community that helps fight hunger and create a more sustainable campus.

“I think it brings awareness to the issues of food waste and food insecurity on campus, and can help to raise awareness for other resources on campus that are available to help students who are food insecure,” O’Rourke said.