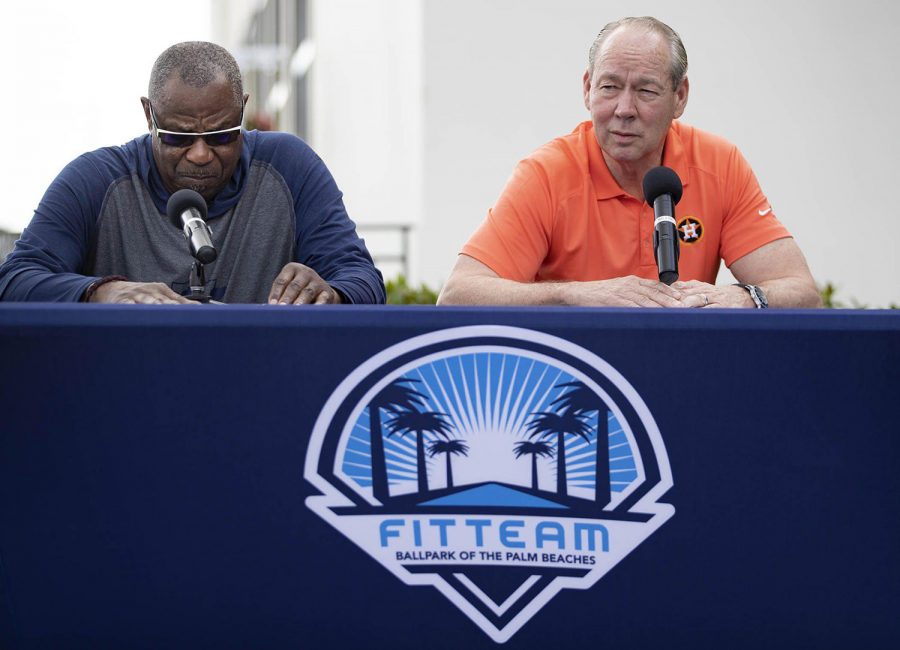 The Houston Astros’ sign-stealing scandal has thrust their 2017 World Series champion squad into the running for baseball’s most infamous team. They stand side by side with the 1919 Chicago White Sox — who were paid to throw the World Series — atop the sport’s all-time list of degenerates. They disgraced baseball.

Houston’s fall from grace has been well documented and extreme. Once a global inspiration for lifting up their city after it was devastatingly struck by Hurricane Harvey, the 2017 Astros are now notorious and scandalous — crooks who unapologetically cheated their way to an illegitimate championship. Could it get any worse?

Turns out it could. Astros’ owner Jim Crane managed to fan the flames even more on Thursday.

“Our opinion is that this didn’t impact the game,” Crane said in a press conference Thursday morning.

To be clear, the “this” that Crane is referring to is the Astros’ tangled system of using technology to steal their opponent’s signals. In short, they used video footage from center field cameras to watch the opposing team’s catcher deliver signs to his pitcher. Once the Astros players in the dugout knew what kind of pitch was coming, they would tip off the hitter through a system of cadences and noises, often loud “bangs” from hitting a bat against a large trash can.

There has never been anything wrong with players or coaches trying to decipher an opponent’s signs on their own. That takes place starting in little league. Using technology to do so, however, is out of bounds, and so much was clearly stated in a directive written by Major League Baseball’s executive office in 2001.

It is easy to imagine why the Astros or anyone else would want to engage in such a system. Simply put, anyone who has ever tried to hit a baseball knows that the task becomes much easier if you know in what direction or at what speed the ball will be moving. This is what makes Crane’s opinion so absurd. In refusing to acknowledge that stealing signs helped the Astros’ hitters, he demonstrates either an astonishing level of arrogance or unimaginable lack of basic understanding.

Back in October 2017, only one thing stood between the Astros and their first ever American League pennant — the New York Yankees. The two teams faced off in the ALCS in what could have been remembered as a classic. In the series’ first two games — both played in Houston, where the Astros were able to deploy their illegal tactics — the Yankees lost narrowly by one run both times. The tide turned, however, when the series moved to the Bronx, as the Yankees convincingly beat the Astros in three games in a row by a combined 14 runs. The series went back to Houston for games six and seven, both of which the Astros won, punching their ticket to the fall classic.

At the time, the success of host teams in the series could have been viewed as a coincidence or credited to classic “home field advantage.” Now, it is viewed in a much more sinister light. The Yankees dominated the Astros when they were on a level playing field. When Houston had an illegal advantage, however, they managed to squeak by New York and steal a trip to the World Series. And more games were played in Houston than New York in the first place because the Astros had a better record during the regular season — which was inflated by their prohibited practice. Nothing about that is fair.

The Astros stole a World Series appearance from the Yankees and a title from the Dodgers, who the Astros subsequently went on to beat. Now fast forward to Feb. 13, after months of investigations, interviews and bad press. Just when player apologies and league punishments started to heal whatever wounds existed, Crane took the stance that the whole thing was barely even a big deal.

“We won the World Series and we’ll leave it at that,” he said haughtily during his presser.

He and the Astros want to move on, which is easy if you’ve benefited from the crime. The victims don’t have the same luxury.

Crane’s comments felt like a slight to those victims, to every team and individual that competed honestly against the Astros. The cheating damaged careers, including that of former Yankees’ manager Joe Girardi, who was fired following their Championship Series defeat, and former Major League pitcher Mike Bolsinger, who has not pitched in a big league game since being lit up by the Astros in August 2017.

Many of baseball’s prominent figures have taken strong stances against the Astros. Cody Bellinger — a starring member of the 2017 Dodgers — didn’t mince words when talking about the Houston players.

Bellinger was not alone in his condemnation. Three-time American League MVP Mike Trout backed those comments up on Monday. And Bellinger’s former Dodger teammate, Yu Darvish, recently said that Houston should be stripped of its championship. Many others agree. But unfortunately that won’t happen.

And of Crane’s comments on Thursday?

“That was such a horsesh*t press conference,” tweeted 15-year pro Trevor Plouffe. “I’m no expert, but I am a human who understands what remorse looks like. Didn’t really see that. Just some smugness and rehearsed blanket answers.”

In baseball and professional sports, integrity and fair competition matter. Crane effectively scoffed at that on Thursday. Of course knowing what kind of pitch is coming helps the hitter. Give me a break.