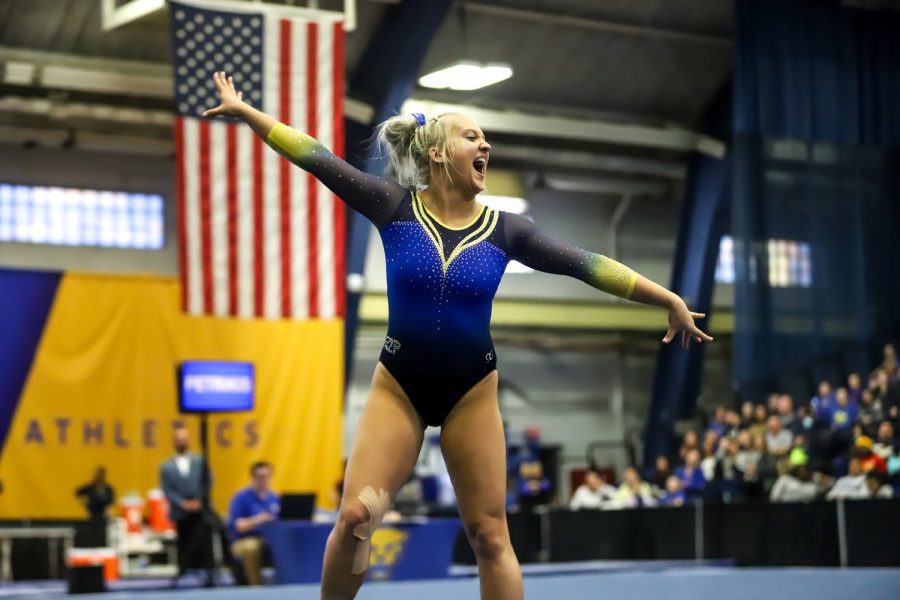 Senior Alecia Petrikis was recognized as the East Atlantic Gymnastics League Specialist of the Week.

Petrikis’ recognition expanded beyond Pitt’s weekly award, as she was subsequently named the East Atlantic Gymnastics League Specialist of the Week. She played a decisive role on Saturday in Pitt’s tri-meet victory over Towson and Yale, earning event-wide high scores on vault and floor exercises. Her vault win came to the tune of a 9.850 score, followed by a career and teamwide season-best 9.900 on the floor. Pitt edged out the Bulldogs and Tigers with a total score of 194.700, its third highest of the season.

She is no stranger to the EAGL’s hardware. Petrikis has been stalwart on both the floor and vault in her previous three years at Pitt and has first-team All-EAGL tournament honors from 2018 and 2019 to prove it. She placed on the first-team All-EAGL vault last season and is a three-time member of the All-EAGL scholastic team as well.

The win moved Pitt’s record to 5-4 overall and 2-3 in league competition.

Petrikis joins fellow seniors Michaela Burton and Deven Herbine as the only female gymnasts to be recognized as Student-Athlete of the week this season, and accompanies Burton as Pitt’s only EAGL Gymnast of the Week winners. Burton has won twice this season.

Meanwhile, Pitt baseball’s offense got its season off to a thunderous start over the weekend, largely due to Washington’s hot bat. Two years removed from being named on the All-ACC Third Team, the junior outfielder made an early claim to once again be considered among the conference’s best through the season’s first weekend.

The 6-foot-1 power hitting Washington finished with only two home runs a season ago, but his pair of bombs from over the weekend matched that total only four games in. In total, Washington reached base in each of his four games played, going 7-17 with two home runs, one double, eight runs scored, eight RBIs and two walks. He was at the center of both of Pitt’s late-game comebacks, specifically playing hero against St. Joseph’s by delivering a game-tying home run in the ninth inning.

Pitt baseball is off to its best start through four games in two years, due in large part to its offense. In four games over the weekend, Pitt scored a staggering 36 runs on 44 hits, good for 15th and 14th in the country, respectively. Coming off a 21-34 2019 season, including an ugly 8-22 conference record, the Panthers hope their hot offense can flip and script from last year and carry them through the rest of the season. Continued productivity from Washington would greatly help that cause anchoring the lineup from his clean-up spot.

Washington finished with only two home runs a season ago, compared to six his first season, but his pair of bombs from over the weekend matched that total only four games in.

Pitt gymnastics will play host to West Virginia in its final home meet of the season on Friday, Feb. 21, at 7 p.m. Petrikis and gymnastics’ four other seniors are set to be recognized in senior night ceremonies before the meet. Pitt baseball will return to Florida over the weekend for a three-game series against Eastern Michigan, which has started its season 1-2.